As humans we are tribal. Our ultimate fear is rejection. Often, we pull away from people before they reject us; it feels less ‘messy’, ‘safer’ and we are more in control. It was November. I was in Paris to work for an art gallery exhibiting at Paris Photo, the world’s biggest photography art fair. It was seven days of gruelling work. I loved every minute, well almost, but the evenings were solitary.

I was staying in the 2nd arrondissement, right in the centre, near Les Halles and Le Palais Royal. Yet each night, once the doors of the Grand Palais closed, at about 9pm, I would catch the No 11 metro line to Belleville, to top up my ‘vibration’, my energy. No going home to face solitary bedroom walls for me; I needed to feel that I ‘belonged’.

Le Grand Bain had popped up as I had trawled the internet, doing my research as I always do for restaurants. More trawling and I found it recommended on a fashion site as being the place to go for Generation Z – my son’s generation, not mine. So the first night I took along my photographer friend Anaïs; well, she’s the niece of a friend, and she is almost Gen Z. The other five nights I went on my own.

Le Grand Bain – what I ate

I ate around 15 different dishes in total from the evolving menu. I won’t bore you with all the photos – otherwise you might ‘reject’ me from the tribe (oh no, the fear has set in!)

The signature dish is the panisse, as featured in the main photo – deep-fried ‘fingers’, made out of chickpea flour dipped into homemade mayonnaise with a dash of Worcestershire sauce. It is a dish typical to the south of France.

Having a glass of wine is a ritual …and with a natural wine, you enter a cosmic world of the moon, the seasons, nature, soil and a location on the map of the earth. The natural wines I had at Le Grand Bain included:

Food and wine apart, my experience was wrapped up with amazing daily encounters with people while I sat the bar… a model from London, a posh man from the 16th arrondissement taking his two children to a different neighbourhood, a Ukrainian working in start-ups on a foodie weekend while his artist wife prepared for her exhibition in Birmingham. To name a few.

There was also one special person, who I had met that day at Paris Photo. I had told a friend who lives in the Middle East about Le Grand Bain. He had obviously told this friend from the Philippines, only for me to find her one night sitting at a table with three of her friends. Social media brings global connection.

Above all, it was the warmth and welcome of the staff at Le Grand Bain (‘The Big Bath’ – and not to be confused with this year’s film by Gilles Lellouche); they made me feel that I was coming home each evening. And, as those using the hashtag #meditatenotmedicate might say, the music helped retune my chakras. 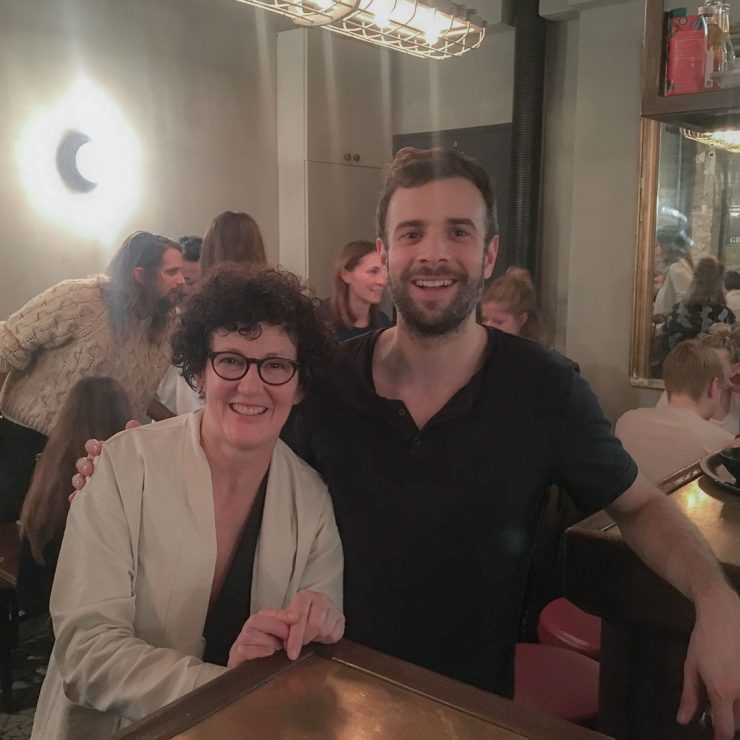 Me with Edouard Lax – one of the two Edwards at Le Grand Bain. The other is Edward Dwelling-Williams.

My favourite bread shop in Paris is Du Pain et Des Idées, in the 10th arrondissement. It opens a 7am, and is closed at weekends. This time round, I ate my red fruit & cream cheese escargot (those pastry whirls) and my sacristan (pastry twisted like a sacristan’s rod & then sprinkled with sugar and almonds) sitting on the bench outside, under the canopy, in the rain, with my coffee (they are eco, so no plastic lids here!)

Now I have another place to go. (I also like gluten-free Chambelland in the 11th.) Just down the road from Le Grand Bain, and still in the cobbled rue Dénoyez, is Le Petit Grain, specialising in sourdough. It is also run by Edward and Edouard, and it is open on Sundays, when so much else of Paris is closed! . To match the Le Grand Bain, the service is also really friendly.

The power of social media: Le Petit Grain put this on social media in the morning, luckily at 6.30pm one was still left.

Le Petit Grain is one of the few bakeries in Paris open seven days a week. They saved me that Sunday night. I had my bread to make my sandwiches for Paris Photo the next day. 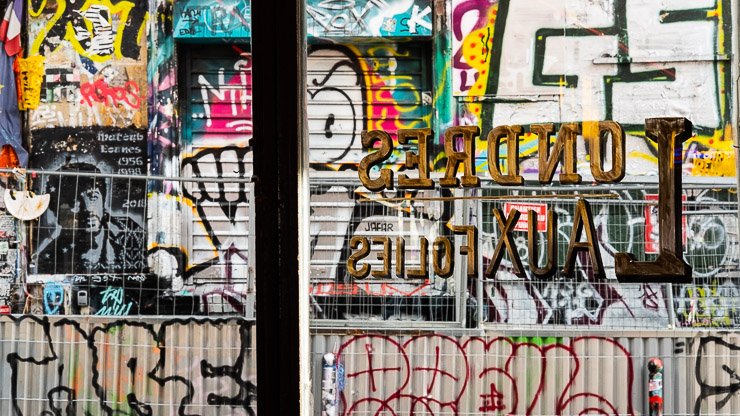 To arrive at Le Grand Bain and Le Petit Grain, turn down rue Dénoyez – named after the Folie Dénoyez a dance hall in the 1830s – at the corner with the Café aux Folies, also a great place for a coffee and to people watch.

I knew the cartoon film Belleville Rendez-Vous. Otherwise, I had always seen Belleville as a multicultural, working-class (or low-pay class) neighbourhood. Now it is the bohemian area of Paris… having shifted from Le Marais, to the 10th and now here – next, who knows where it will be.

Belleville is to Paris what Sodermalm is to Stockholm or Hackney Wick to London… but with more vibrancy, buzz and authenticity. You better get here quick before gentrification prices out the bohemians.

The Cave de Belleville is my new go-to place to stock up on natural wine… much better selection and prices than in London. It’s also a wine bar, serving cheese and charcuturie. I bought some saucisson made from pigs fed the milk used for Cantal cheese – delicious! And goat’s cheese, my favourite. 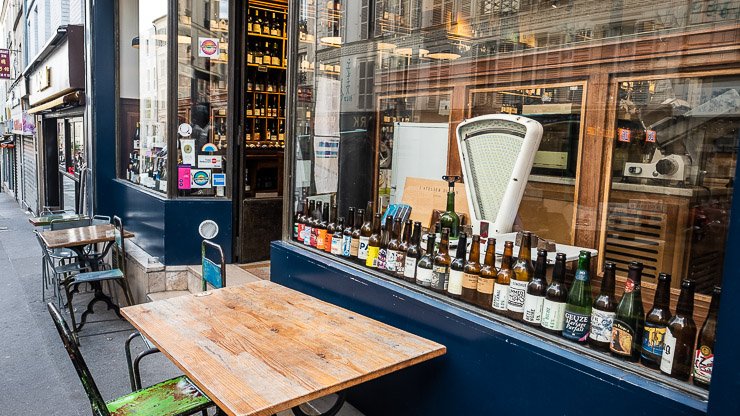 Everything seems to happen on or just off the rue de Belleville, where Edith Piaf is said to have been born under a lamppost…

“You need to be careful of words,” says this artwork.

My son was partly brought up in Paris, and Buttes-Chaumont is his favourite place.

I walked to the top of a hill and sat on a bench. I listened to the wind in the trees, felt the air on  my face and took in the autumnal colours.  Trees were all around me – unlike my nearby Primrose Hill, which is only open in two directions. Nature is good at keeping your vibrations strong. I never made it to the main spot in the park – the Temple of Sibylle, perched on a cliff overlooking the lake. 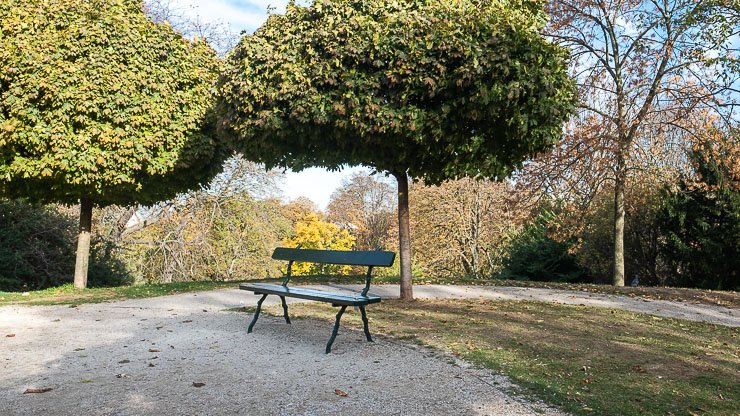 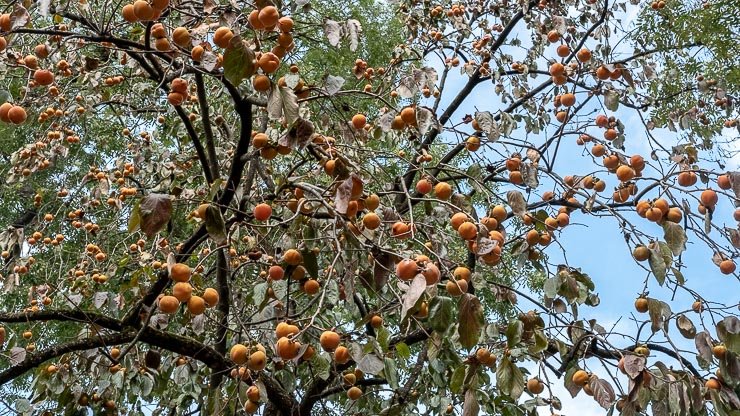 Le Grand Bain is for going out and having fun; Le Baratin, a few streets up the Rue de Belleville, going towards Buttes-Chaumont, is about finding solace and comfort in a place that feels like home. I squeezed in a lunch here on my first day of work as we were not starting till late – Le Grand Bain is closed at lunchtime.

I discovered Le Baratin in Girona, where I spent four days this September. Most evenings, I would prop up the bar at Restaurant Maran with a glass of natural wine and some tapas. Each night at the bar, there was a couple from Paris. He was French and she was Argentinian.  I then found out they had a restaurant in Paris, in Belleville, Le Baratin, up the hill from Le Grand Bain.

Raquel Carena and her husband opened Le Baratin 30 years ago. La mère de Belleville, the mother of Belleville, as she has been called, is in the kitchen and her husband behind the bar. The food is nourishing, seasonal and flavoursome… and the wine is natural, of course. It has a bistro feel, with zinc bar, tiled floor and small library, but there’s something more. For its homeliness it reminded me of Le Café du Peintre in Lyon, where Florence Périer resides, but more Parisian, more refined. 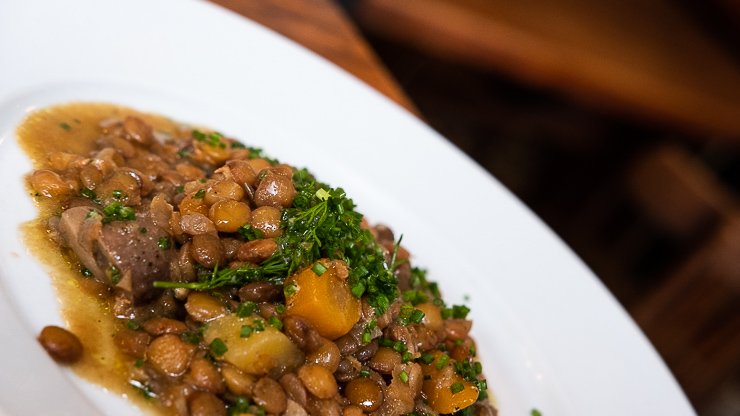 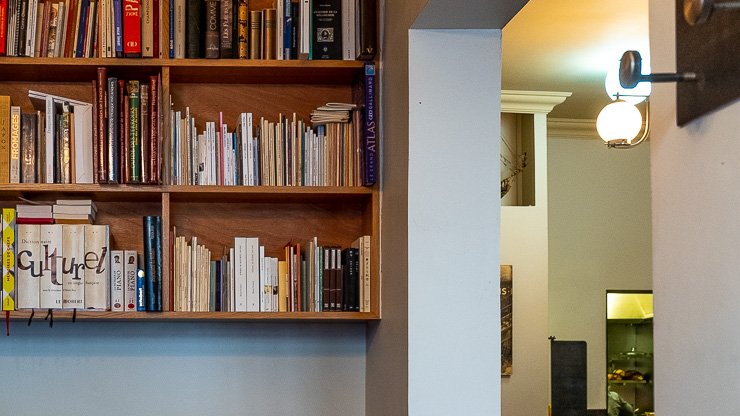 My view from my table – a small library. 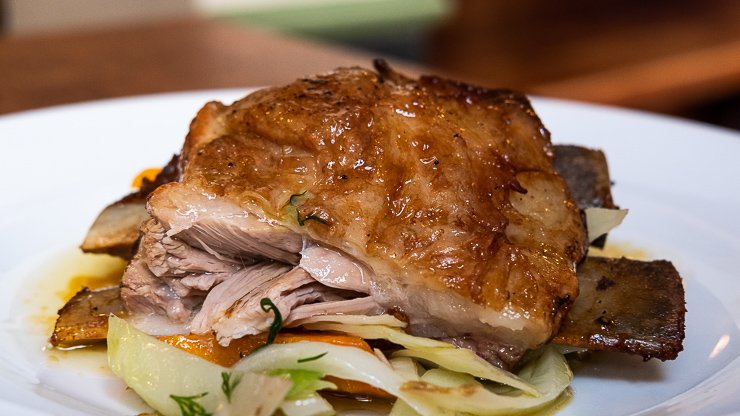 Veal with fennel and citrus.

Age is in the mind

I met a 31-year-old restaurateur who told me that Le Grand Bain was “too young” for him. He preferred Le Baratin.

What does “too young” mean? I see life as an upward path to some higher level of consciousness. At times I need a boost to help me climb that path (Le Grand Bain) and at other times I need to rest on the flat (Le Baratin) before I take the next ascent.

Age is a state of mind. With states of mind, we need to be careful… we must not deceive ourselves. Only we know whether we are deceiving ourselves or not, and it comes from finding ‘stillness’ and then going within. But that’s another story.

For a reasonably priced hotel, I liked the look of Hotel Scarlett. I did not stay there. I just went in and said hello. It is a few doors down from Le Baratin, so in a quiet street and close to Belleville metro.  Or for single travellers looking to spend more money on food than accommodation, try Beautiful Belleville Hotel & Hostel, although single rooms go quickly.