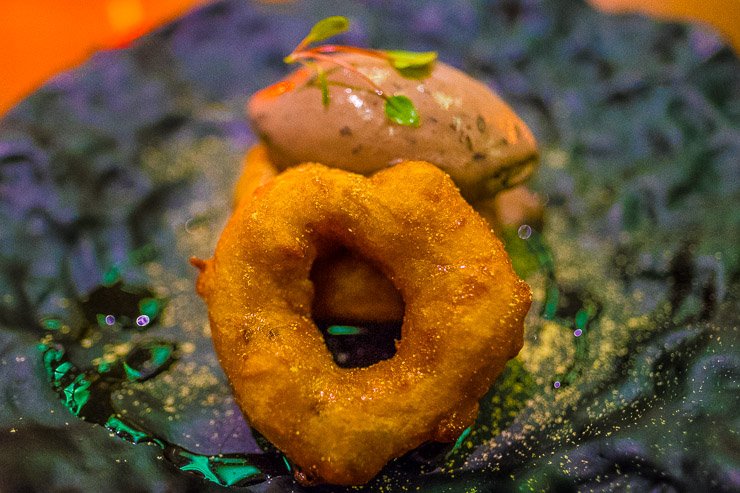 What do you get when you cross Peruvian cuisine with Japanese? Nikkei.  How that cross is made, depends on the chef.

One of the most famous names linked to the 2 great culinary worlds of Japan and Peru is Nobuyuki Matsuhisa, the founder of Nobu, now with exclusive restaurants around the world.

‘Nobu’, as he is called, was brought up in Japan, where he trained as a sushi chef, and then opened his first restaurant, a sushi bar, in Peru.

Nikkei means quite a few things in Japanese. Apart from the cuisine, it also refers to the Japanese diaspora… & it’s the short form for Japan’s top stock market index.

So what is the historical link between Japan and Peru? The two countries both look out across the Pacific. They both love fish, especially raw fish. Peru is also home to the second largest Japanese community in South America after Brazil, with the first Japanese arriving in Peru back in the 1890s, escaping poverty back home.

I went to Lima’s top Nikkei restaurant, Maido. Back in London, I followed this up with a Nikkei dinner jointly prepared by Peruvian restaurant Lima Floral and Shackfuyu, ‘home of Japanese soul food’.

Maido was given the Highest Climber 2016 Award in the World’s 50 Best Restaurants. It is now ranked 13th, one above The Ledbury in London.

Sorry guys. I was disappointed. OK, yes, I did eat at the bar, as I could not get a reservation in the main restaurant. But still.

The service was bad. The ice-cold water had a metallic taste from the steel beakers. The chopsticks were cheap (from my travels in Japan, I’ve learnt the importance of quality chopsticks). The hojicha tea didn’t taste as good as at Sager & Wilde in London. And I was put off by fellow diners getting out their selfie-sticks.

Admittedly the food was good… the experience just could have been better.

What I ate at Maido 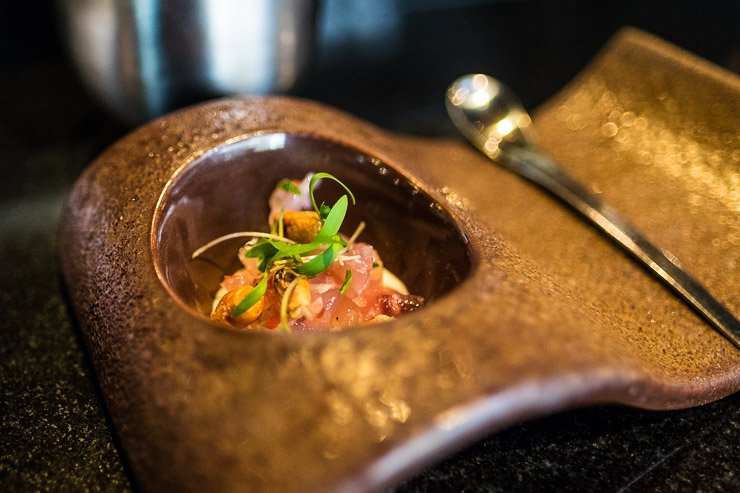 Followed by two nigris (small clumps of rice with a piece of fish on top): 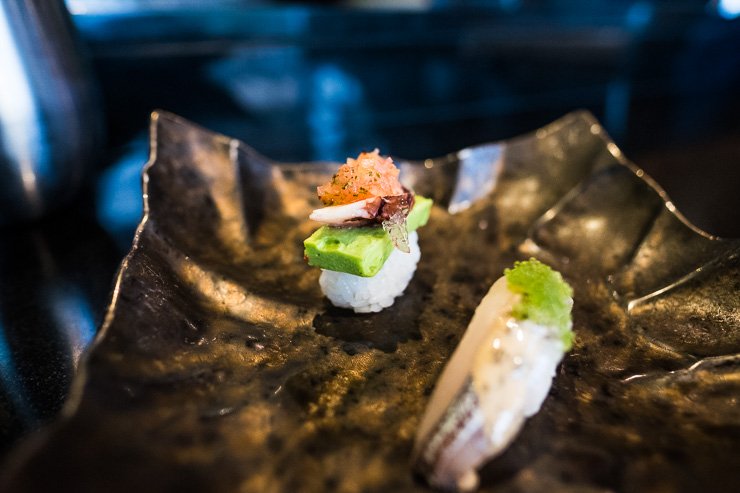 Next up was the pièce de résistance… Cebiche Sansei, with raw pejerrey, or silverside, fish, scallops from Paracas, limpets, ‘tiger’s milk’ (the traditional ceviche marinade, with lime, onion, chilli), smoked yellow pepper, minced nori seaweed, avocado and corn. (Cebiche is either spelt with a ‘b’ or a ‘v’.)

The waiter did everything too quickly, and without warning, pouring something over the dish which sparked a cloud of smoke… what it was, I never found out… it would have been too trying to get that out of the waiter. 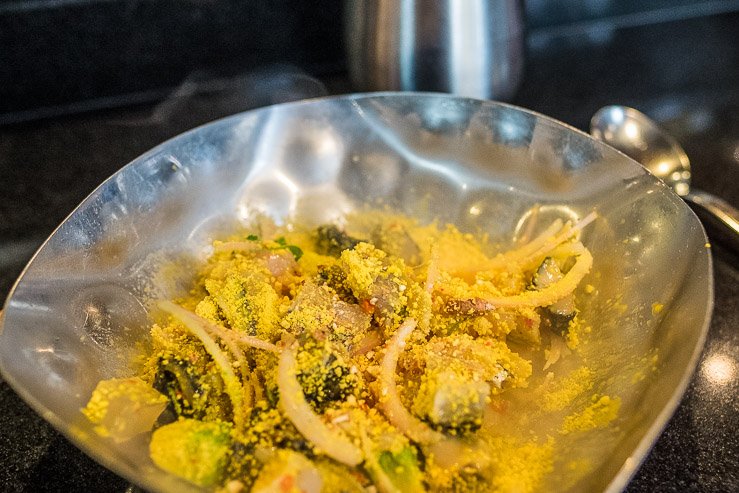 Then I took the Gyoza de Cuy – dumplings filled with confit of guinea pig, ponzu (the citrus-based Japanese sauce) & Amazon pepper, with a thin crunchy cover that you had to tap through to get to the dumplings.

I had to eat guinea pig once while in Peru, and this was the moment. It tasted good. The locals told me that they only ate it on special occasions. Most of the guinea pig that you see on offer at roadside restaurants is done just for the tourists. 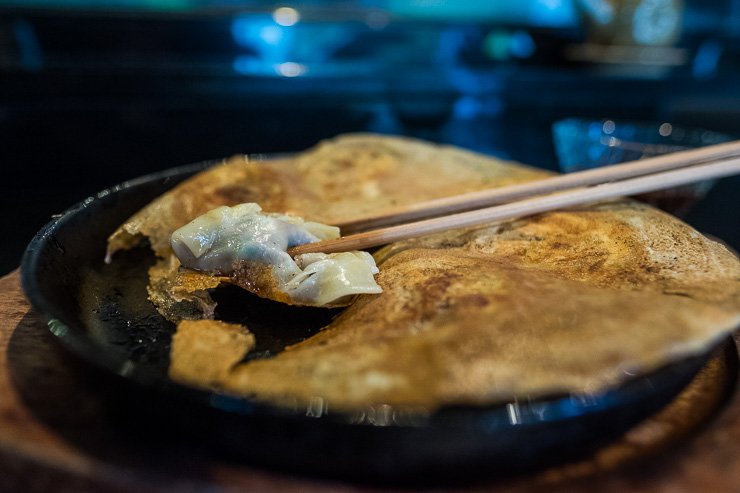 Maido, like most places in Lima, is in Miraflores. The entrance is not very welcoming, but once up on the first floor, the ceiling in the main restaurant is decorated with an interesting rope sculpture. Depending on which way you look at it, the ropes reveal to the eye either the Japanese flag or the Peruvian flag – both are white and red. 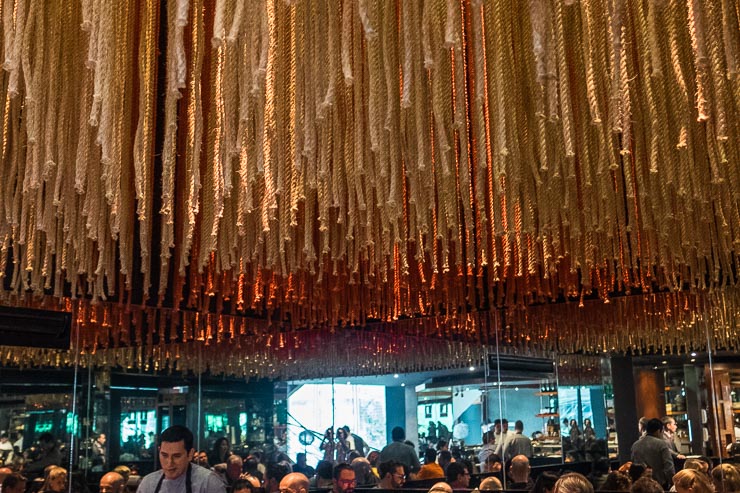 I intended to stay longer at Maido, but I left early, once I had finished my hojicha.

Back in London, one of the best-known Peruvian restaurants is Michelin-starred Lima Fitzrovia, where Robert Ortiz is Head Chef and Virgilio Martínez of Lima’s Central Restaurant is Executive Chef.

Lima Fitzrovia’s sister restaurant in London is Lima Floral, in Covent Garden. Originally, this was the site of the very first restaurant where I ate in London – Inigo Jones, which closed in the 1980s and used to be very popular with the advertising crowd …  my first job was in advertising, for Ogilvy & Mather. 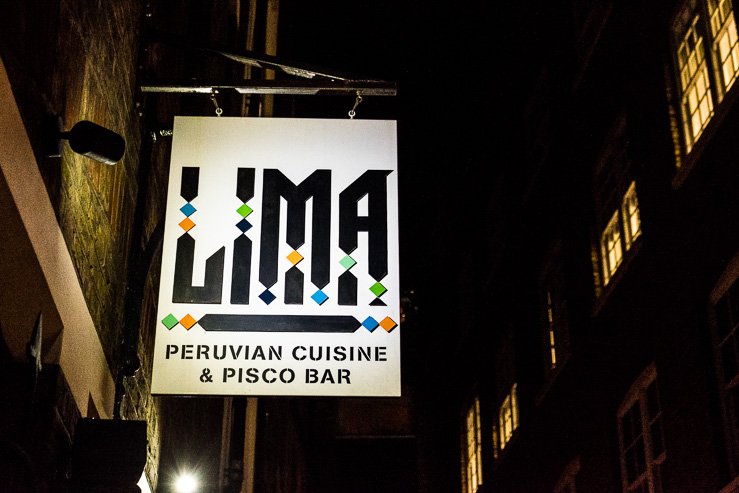 Earlier this month, Robert Ortiz of Lima and Ross Shonhan, chef proprietor of Shackfuyu in London’s Soho (part of Bone Daddies group) got together to prepare a Tasting Dinner to celebrate Nikkei cuisine … Ross, formerly of Nobu, had been inspired by his travels to Peru earlier in the year and had been looking at introducing some South American flavours into his own menu. 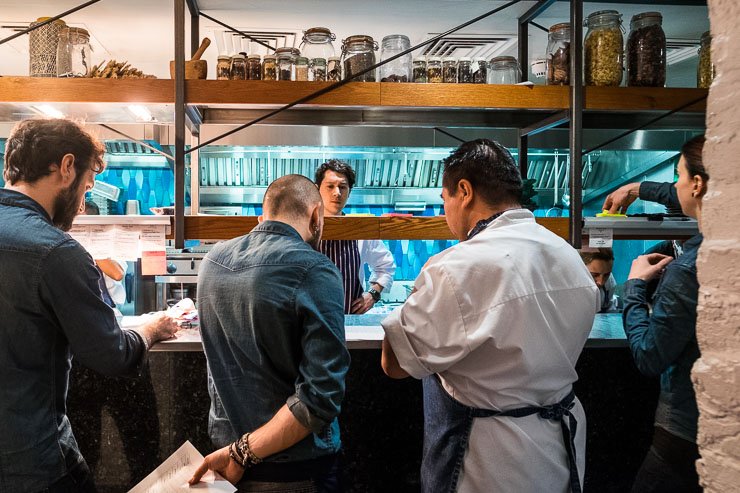 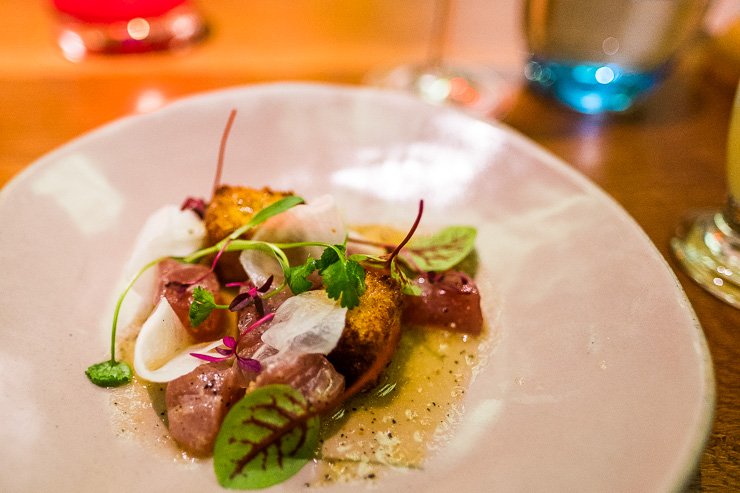 Scallop & Razor Clam Tiradito… tiradito is the quintessential Nikkei dish, with raw fish or seafood cut in the shape of Japanese Usuzukuri-style sashimi in a spicy sauce. Unlike ceviche it has no onions. 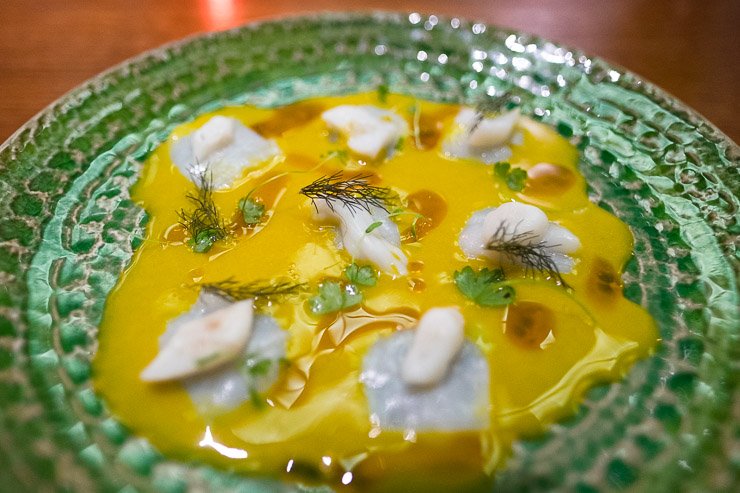 Unagi Kaba-Yaki Causa… causa is the potato cake-like dish I had eaten in Cusco. This causa looked very different. 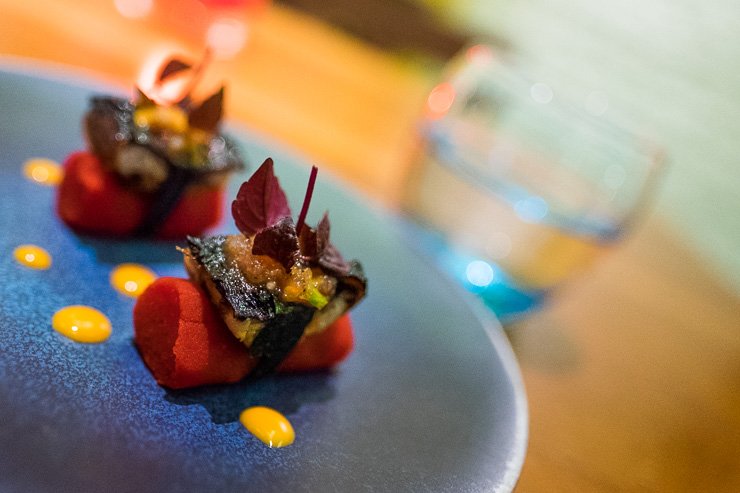 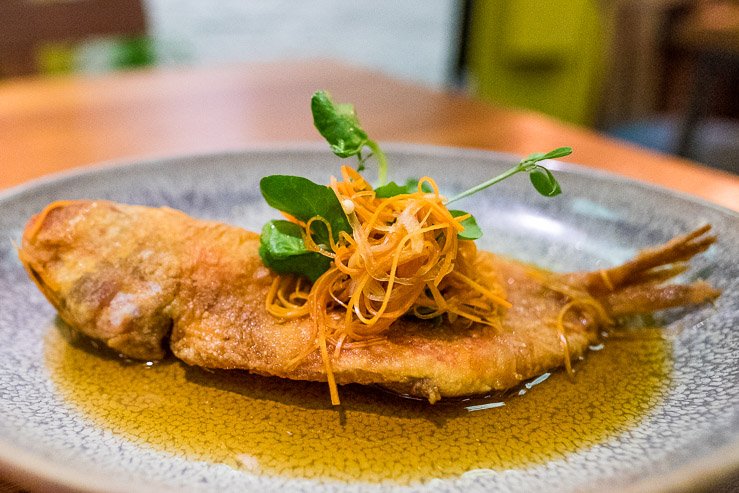 Hoba Leaf Pork Tamale… I ate corn tamale for breakfast in Cusco. Here, they were wrapped in a Japanese Magnolia leaf rather than the corn leaves. 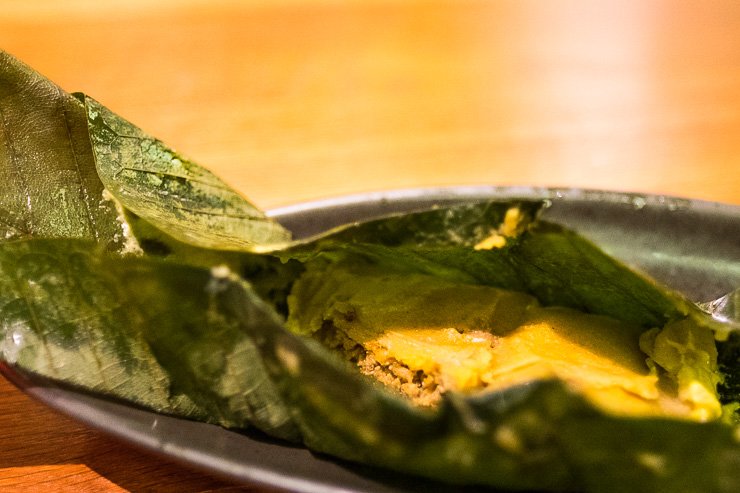 Grilled Partridge with a Rocoto Soy Glaze – rocoto is the famous Peruvian pepper. The use of partridge reflected that British ingredients also had their role to play. 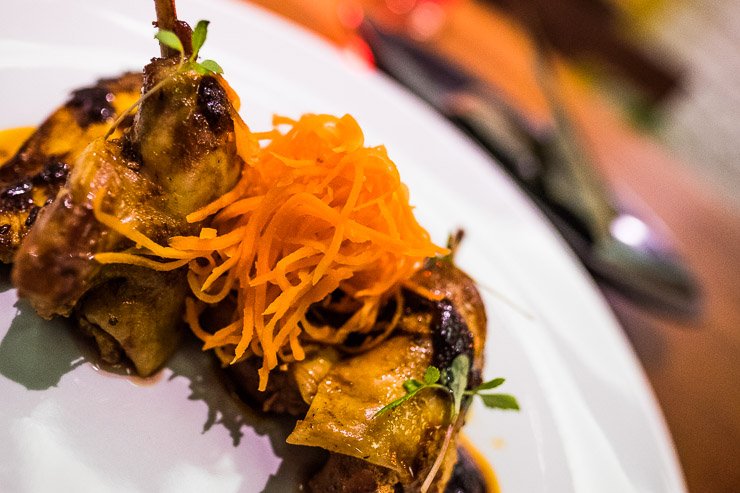 And then to finish, Kinako Picarones with Peruvian Chocolate Ice Cream, as in the featured image. Picarones are Peru’s version of doughnuts, and at Lima Floral they were deep fried in soya bean crumb… DELICIOUS!

And I just loved those vibrant colours at Lima Floral… especially on a cold, dark winter’s night. 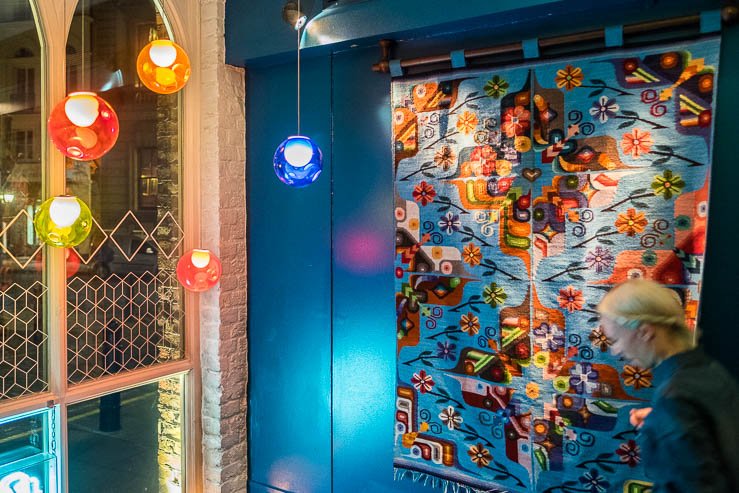