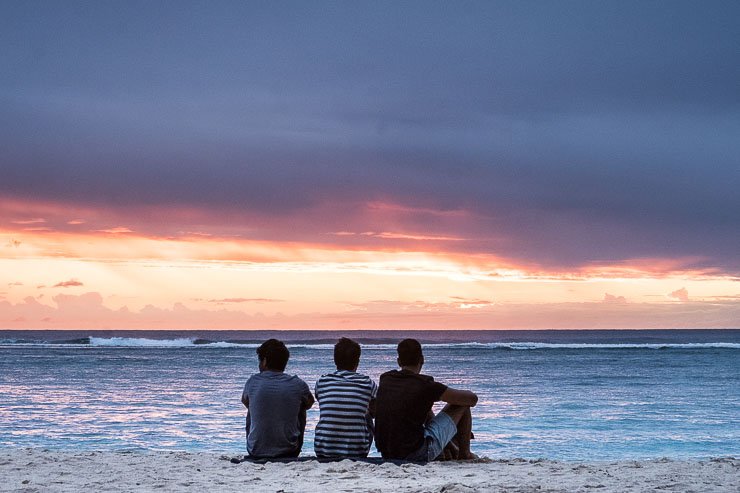 24 Aug The power of the ocean: Mauritius

Miles of beaches with fine white sand, a clear blue sea, and friendly people from a mix of cultures. That’s what I loved about Mauritius.

My five-day visit for a wedding in July also opened my eyes to something bigger, something global: the world’s oceans and the predicted destruction of 90% of coral reefs by 2025.

I never saw the coral in Mauritius – I was too busy partying, and I have a fear of putting my head underwater.  My only contact with coral was watching the waves breaking as they crashed into the coral reef off the island’s shores, and finding little pieces of skeletal bleached coral.

In all, there are 150km/95 miles of ‘fringing’ coral reef around Mauritius, as well as a stretch of barrier reef by the southeast coastal town of Mahebourg. A barrier reef is older than a fringing reef and separated from the shore by a lagoon.

Hopefully the coral off the coast of Mauritius is alive and healthy, but all it takes is a rise of a couple of degrees in sea temperature and the coral starts to die.  One of the culprits, if not THE culprit, is global warming.

Our oceans account for more than 70% of Earth’s surface. Their role is to absorb the heat. So as temperatures rise globally, this raises the sea temperature, which in turn kills off the coral. We need coral – they are the forests of our oceans, supporting an abundance of living creatures which in turn provide a livelihood for hundreds of thousands of people around the world. We need to look after our legacy for future generations.

For those who want to know more, I recommend the brilliantly filmed Netflix documentary Chasing Coral. Such was my thirst for finding out more about our oceans, I watched this within 24 hours of seeing the newly released biopic of explorer Jacques Cousteau, The Odyssey, starring three of my favourite actors – Lambert Wilson, Pierre Niney and Audrey Tautou.

If Sri Lanka is India Lite, Mauritius is Africa Super Lite.  Even though the plane from London was packed, most tourists choose not to visit Mauritius in the winter months, and July is the coolest month of them all. At night, the temperature dipped to 20ºC/68ºF and during the day it went up to 25ºC/77ºC. Dressing in layers was the solution, with a cashmere scarf for cool evenings. Winter is the drier season and we were on the west coast, where rain is less frequent. And it still rained! I always had an umbrella in my bag.

We were staying in the town of Flic en Flac. You can read more about Flic en Flac and neighbouring Wolmar, the location of many of the luxury hotels, in my next post.

After a day at the Sugar Reef Beech Resort in Wolmar, with a glass of rum or a coconut in our hands, we went the next day to the plages sauvages, to the ‘wild’ beaches of the south.

First we went to the rugged coast east of the town of Surinam. The basalt cliffs and boulders, wild waters, whipped up by the southeast trade winds, and the absence of coral reef to break the big waves didn’t make for a good picnic spot, so we moved on.

Our next spot was on the beach off the road from Surinam west to Riambel. Here we found white sands and calmer waters, given the coral reef offshore, yet the winds still blew.

We changed beach again, further towards Surinam. Not so wild, but at least sheltered. A big sign read no bathing because of the currents. We swam, hugging the shore, and feeling comforted by the shallowness of the waters.

West of Riambel, on the same coastal road, is the Shanti Maurice Resort. I’d like to go back and stay at this boutique hideaway…  to find peace, luxury, nature, a good (Nira) spa, as well as the Aquacasia cuisine, their own invention and based on the cuisines of the Indian Ocean.

More times than not in the restaurants in Mauritius, the fish on offer is dorade, or sea bream. Now I know that most sea bream is farmed. It’s the warm-water version of salmon:  a fish universally ‘safe’ to offer on a menu, and mostly served with no regard for the environmental impact of intensive fish farming.

At the market in Quatre Bornes I came across fish that I never found in the restaurants. I asked the names of two. One was capitaine and the other barracuda. Maybe they had been in one of the fish curries I had eaten? Possibly, but I bet instead it was sea bream.

There were no queues or customers for the fish at the market … unlike for the samosas or the dumplings. Variety adds spice to life… it would be a shame to loose the tradition of eating a wide range of wild fish, caught in a sustainable way, of course.

Everywhere you go on this paradise of an island, the ocean is never far away. Mauritius has 117km/125 miles of seashore, almost entirely surrounded by coral reef.

We drove up to La Vallée des Couleurs Nature Park at the end of the afternoon to see the multi-coloured earth and to go on the zip line … I had an espresso instead – Mauritius is about tea not coffee and I had been on my fourth self-imposed day of no caffeine.

The drive from Surinam to the park was through a land of sugar-cane fields. Only 2% of the island is covered by native forest, and sugar still accounts for 90% of the farmed land. The monotony of the sugar cane was alleviated by the feeling of the sea in the breeze.

Next time I go to Mauritius, I will learn how to snorkel, if not to deep sea dive, and see the coral. I passed up an amazing opportunity this time round, but I’ve only learnt that with hindsight… and hindsight is all too easy to have.

Click here for my other blog posts on Mauritius