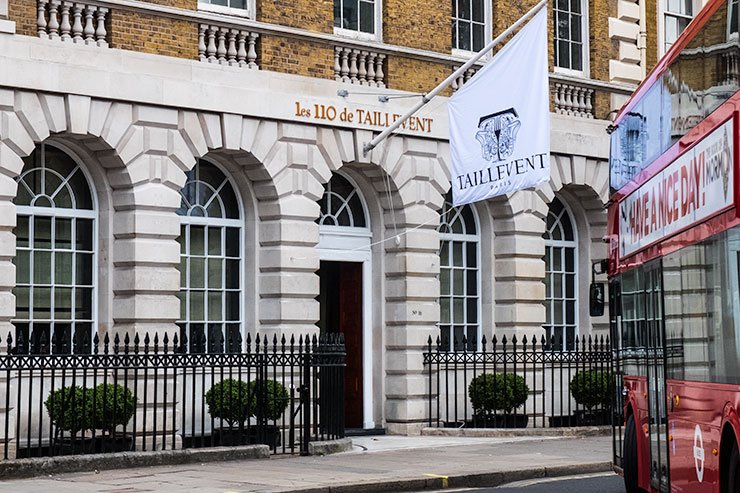 The ‘110’ refers to the number of wines on offer by the glass, whether 250ml, 125ml or 70ml… providing a heady (as in exhilarating) opportunity to discover lots of wines without getting totally legless.

I don’t write about wine, food, or restaurants… but about experiences. And my visit for the soft opening of the so-called post-lunch & pre-dinner Wine Time was a fascinating, highly enjoyable & ritualistic experience… with lots of great wines, food & people.

The name Taillevent has nothing to do with size (taille) or wind (vent), but is inspired by Guillaume Tirel, aka Taillevent, a French cook at the time of the 100 Years War in the 14th century & seen as the founder of French gastronomic tradition.

French cuisine is one of only two protected by UNESCO – together with Mexican cuisine. But say ‘Taillevent’ in Paris and the name is synonymous not with the mediaeval chef but the 2 Michelin-starred restaurant Le Taillevent, opened in 1946 in the former home of the Duc de Morny, in the 8th arrondissement (think posh).

The ceilings are high & ornate, and the understated, carefully blended colours go perfectly with the world of wine… the green of the vines, & the browns & ochres of the barrels & the soil… or ‘dirt’, as Americans call it.

I loved the sense of touch experienced from entering through a heavy velvet curtain, & the iconic chandelier – a little too big for my sitting room – in the Lamennais private dining space… the design is by Pierre-Yves Rochon, whose other works include The Savoy & the Four Seasons in Park Lane.

Given my desire to live for the moment, I ploughed my way through enough wines that late afternoon to miss seeing Sicario at the cinema. After helping the fortunes of so many French vineyards, although Les 110 de Taillevent is far from being just about French wines, I instead ended up watching the French being defeated in the Rugby World Cup by another great wine-producing nation – New Zealand.

Four wines proposed for each course

Back to the restaurant. Once you’ve captured the concept at Les 110 de Taillevent, it’s easy. For Wine Time, the courses on offer to pick & choose from are: vegetables, charcuterie, fish, cheese & desserts. For each course, four wines are proposed, from an ‘entry’ wine, to a wine to be discovered, a little found wine, and then a sublime wine.

Wine lists usually make my knees go wobbly: the pressure to choose the right wine is too great. Often I just drink water when I go out… life is too short to have a bad wine experiences. But boy did I make up for it that afternoon!

Here, at Les 110 de Taillevent, I was very content, perched at the bar, always the best place if you are solo, with no algorithms needed for how many bottles or glasses & which wine. The waiters were also very helpful in guiding me; they had obviously been chosen for their wine knowledge & passion.

My neighbour at the bar, meanwhile, was busy complaining – to be fair, not in an overtly critical way – that the restaurant didn’t have a phone charger for her BlackBerry. I was there for the wine.

Now, I am not a wine expert, &, I am embarrassed to say, after an accident in 2009, I have no sense of smell. This means that I only like good wine… wines that are well structured, with the right acidity balance… no faults can be masked by aromas.

Saying that, my first semi-professional wine tasting after my accident, I was really impressed by my accuracy… as my neurologist said at the time, “You are using all those other senses that the medical world has still not given a label to.”

For the vegetable course, it was a toss up between the Sake Dassai ‘EU 50’ NV Asahi Shuzo & the Irouléguy Hegoxuri 2013, a biodynamic wine of Gros Manseng & Petit Manseng, with a dash of Petit Courbu, from the Arretxea domaine in the Basque country.

I plumped for the Basque wine, a wine with character, body, just like the Basques themselves, & their food. This was to go with the pumpkin velouté, with chestnuts & hazelnut flakes.

And then my other top preference, apart from the champagnes, which are always high on my list, was my last wine of the evening: the Jurançon Moelleux, Clos Uroulat 1990 Charles Hours – an amber-coloured wine of chamomile & apricots, which went perfectly with the desserts without being too sweet. I have always loved a Jurançon as an aperitif, & this was the first time I had taken a Jurançon as a desert wine.

For the charctuterie, I chose a sublime pâté en croûte, with pork crackling – aka pork pie in Britain, but with a touch of foie gras and pistachio. For the accompanying wine, I just had to go for the Phélan Ségur 1996, a vineyard owned by Taillevent in Saint-Estèphe, one of the most prestigious Bordeaux wine regions.

For the remoulade of crab, I went for the New Zealand Craighall 2013 Ata Rangi. Now if I had known that the All Blacks were going to smash the French in the rugby that night I would have gone for the red Loire, the Côté Roannaise Oudan 2013, Domaine R Sérol, at the other end of the price spectrum. But I didn’t know.

Ata Rangi’s Chardonnay was good for a Chardonnay, but I am a European wine fan (not an expert). Also just say ‘Chardonnay’ to me, & I close down, scarred by all those years when everyone seemed to drink nothing but Chardonnay. I like the character & individuality of European wine… but then I am just a wine consumer.

The crab was excellent, with a smooth sauce on top, & caviar underneath.

I was holding myself well till the desserts. Now this was the day after I had started to read Eat, Nourish, Glow by Amelia Freer, nutritional adviser to the likes of Boy George, & I had vowed to give up sugar to optimise my energy levels & lower my waistline.

Then I fell: I ate four (Wine Time-sized) desserts – crème anglaise (custard for us), a réligieuse citron (usually chocolate or coffee, but I loved this lemon one), a charlotte aux poires & a Praliné Feuillantine.

And I started on the champagne. Before the Jurançon, there was a small glass of Champagne Brut NV Delamotte, & then, moving up the scale, a Champagne Salon – both from the same Champagne house.

The latter, 100% Chardonnay, was a champagne loved by Hitler and Churchill alike, and is only released under the Salon name during exceptional years. The waiter explained that the champagne is aged for ten years on lees (in bottles, in the cellar) & that there were only 37 vintages in the 20th century… I learnt a lot about wine during my afternoon at Les 110 de Taillevent.

The conversation then started to flow even more freely with the arrival of two French neighbours to my left. I had French to my left and a New Zealander – the one who wanted a BlackBerry charger – to my right. Thank goodness the rugby match had not started, otherwise the French might have started singing, as French people do when they get excited.

Then my photos started to come out all wrong – the focus was blurred & the playbacks were sepia. “It can’t be the drink,” I said to myself, as I fiddled around with the buttons, not knowing which ones I had pressed by mistake.

My French neighbours shared more champagne with me, as well as stories & laughter. But then no one can ever drink too much good wine when paired with good food. I was just too relaxed to get to the cinema on time. I had not drunk too much. Promise!  But then not being a wine writer, I can drink just for pleasure, & Sicario can wait for another day.