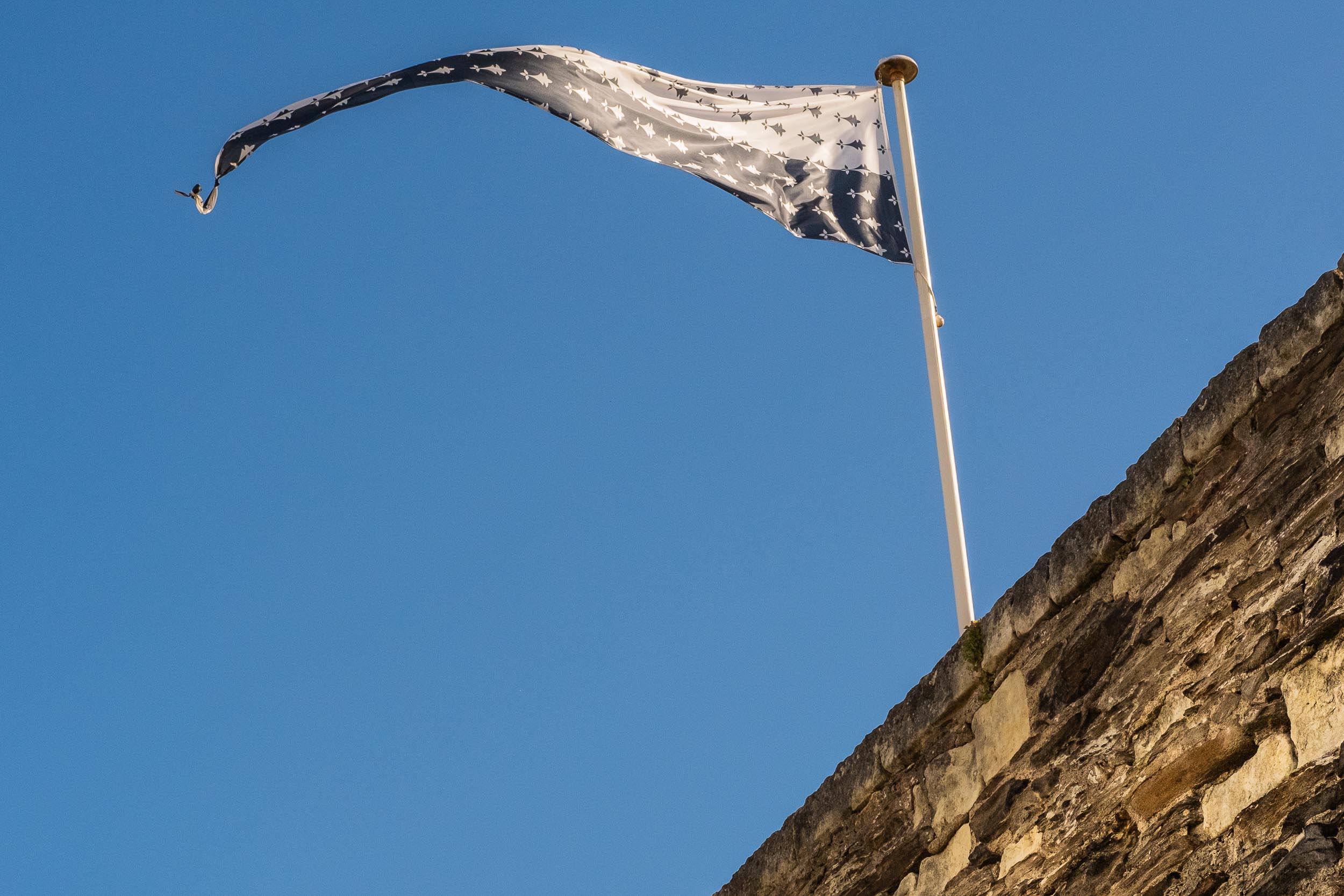 08 Jul A weekend in Nantes ‘solidaire’

I spent a weekend in Nantes this June as part of my quest to find a city where the energies are right and the prices not too high.  A dream place to escape to from the harshness of the world.

When I got to Nantes, I found a city that oozed solidarity and green consciousness, helped by its location on the outward-facing west coast of France and on the banks of the river Loire.

But I had an oversight. My visit (on a Sunday and Monday) coincided with one of those long holiday weekends in France, so I missed out on my second reason for going to Nantes – to eat at Omija, a restaurant highly recommended by Fabienne Lion Völlmy, an urban winemaker in Marseille.

It also meant that I spent most of my 48 hours hunting for places to eat. Luckily I didn’t have to resort to Monoprix supermarket. Quelle horreur!

Home to the Dukes of Brittany

First some historical and cultural notes. The fairytale-like Château des Ducs de Bretagnes, home to the former Dukes of Brittany, is at the heart of the city of Nantes. Anne of Brittany was one of the last Dukes, or Duchesses. She died in the 16th century having also been Queen of France, Queen of Naples and Queen of Milan.

In reference to the city’s Breton roots, streets names are in French and Breton; so the ‘Rue des Trois Croissants’ (the street of the Three Croissants) is also the ‘Straed an Teir C’hreskenn‘.

The black-and-white Gwenn ha Du Breton flag, which flies atop many a building, was designed in 1923 by nationalist Morvan Marchal, and inspired by the US stars and stripes. (See main image, taken at the Château des Ducs de Bretagne.)

Nantes: a town with open arms

I stayed in the old quarter, on the north side of the river. Over my 48-hour visit, I spent much of my time wandering even further north, towards the river Erdre, just south of the Île de Versailles.

This small, wooded island is home to Cocotte Solidaire, a canteen designed to be just that, solidaire – “to make urban living more friendly and less lonely”.

For Nantes is a city solidaire. English offers no true translation of solidaire, which reflects a sense of ‘joining together’. The hardly used English word ‘solidary’ is too ‘solid’ and heavy to serve as a translation.

Other ‘human’ touches that I came across in the city were the centres for homeless people to find connection and a ‘book postbox‘ (featured here) on the Île de Versailles, where you can exchange a book or borrow one to read in the woods.

The city is also very ‘green’. Current plans are to create 50 urban ecological habitats by 2026.

The modern Tower of Brittany

You can never get lost in Nantes as you’ll always spot the 37-storey Brittany Tower – a 1960s architectural disaster (in my words) just north of the historic district. Or is the building set to become a 20th century icon that will join the Château des Ducs de Bretagne and Nantes Cathedral as city attractions? Time will tell.

So here come some of my recommendations. First up is L’Artichaut Café, Restaurant, Art Gallery. Here I found the best Sunday brunch ever (see below). Not too carb-loaded, not too oily. The people are friendly, the place cosy and art is on the walls – abstract pictures taken of smashed phone screens when I was there. I almost bought one, as I saw water lilies rather screens. This place had my vibe.

The best-known market in Nantes

Talensac Market, the best-known market in Nantes, was open on the Sunday and on the holiday Monday. It’s an easy walk from both L’Artichaut and the Île de Versailles.

To pick a few favourites: pastries and bread from Boulangerie Patisserie Catherine, cheese and yoghurts from Beillevaire ­(a commercial brand but local and good), and fruit and vegetables from the AB (Agriculture Biologique) store just outside the main market, where I filled up with local in-season cherries, strawberries, apricots and radishes.

And look out for the Gâteau Nantais: a local speciality – a cake made with ground almonds, butter and rum, and coated with rum-flavoured icing sugar.

A strawberry flavour to the Château

Up the coast in Brittany, Plougastel is famous for its strawberries. In Nantes, La Fraiserie, in the Château des Ducs de Bretagne, offers nothing but ice-cream and sorbets made with local strawberries.

I highly recommend a strawberry ice cream in a cone and a wander along the château ramparts, up high, with magnificent views of the city and across the river Loire. As humans, we love vantage points. It helps us see clearer.

A note about coffee – Cime

Every city I visit in France has at lease one good local coffee roaster. In Nantes it is Cime Torrefacteur. Their café is closed on Sundays and Mondays, but I managed to catch a cup at The Good Life, just before my train on Tuesday.

The Jardin des Plantes in Nantes

The Botanical Garden of Nantes is next to the train station, which makes it exceedingly useful for those odd spare minutes when you arrive at the station early.

A delightful place – where I got chatting to a local junior gymnast team – well cared for, loved and very popular with the locals. If only I could grow vegetables so beautifully as they do. But then the strong Loire sun helps.

The art of museums in Nantes

Regional museums make for a much more enjoyable visit than over-crowded global city venues holding blockbuster exhibitions. The Fine Arts Museum of Nantes – close to the Botanical Garden and to the Château, but then everything seems close in Nantes – was extended by British architect Stanton Williams earlier this century.

When I was there, the exhibition was by Berlin-based artist Angela Bulloch, who specialises in sound and installations – which always make for an interactive experience.

Yes, I found soul and solidarity in Nantes, but I also heard a lot of planes going overhead, as the city is under the flight path for the Nantes Atlantique airport. The sound and frequency was no worse than if standing in London’s Kew Gardens. Did the bright clear Atlantic coast sun outweigh the noise of planes? Yes, possibly, but not everyone notices the planes.

A day trip to Saint-Marc-sur-Mer

If you travel down the Loire from Nantes towards the sea, you’ll come to Saint-Nazaire. This Atlantic coastal town is famous for its dry docks and the British commando raid in 1942, called the “greatest raid of all”, by the British.

Be prepared for an industrial landscape and modern housing (all historic buildings were flattened by bombs in the Second World War). The docks, in the meantime, have enjoyed a renaissance and aerospace giant Airbus operates two plants in the area.

My reason for visiting the area was to reconnect with an old friend and visit the nearby seaside town of Saint-Marc-sur-Mer, made famous for being the setting for the 1953 comedy by Jacques Tati, Monsieur Houlot’s Holiday.

I arrived in Saint-Nazaire after a 30-minute train journey from Nantes to be picked up by my newly found friend in his car. We then drove up to the historic town of Guérande (famous for its sea salt), and then along the coast to La Baule (too Parisian bourgeois for me) and then on to Saint-Marc-sur Mer, at the mouth of the Loire, for a windy walk along the sandy beach with its rocky coves. It was good to escape for some bracing sea air, which is never far from Nantes.

Check out my posts on other French cities and town outside Paris: Antibes, Cannes, Bordeaux, Marseille, Lyon, Reims, Strasbourg and Uzes.