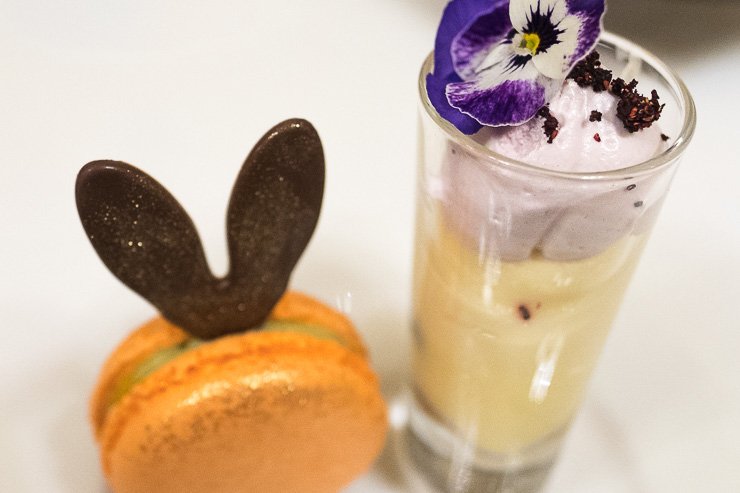 I blame Instagram for enticing me down for Easter Afternoon Tea at Hotel Café Royal. I had been drooling over the dopamine-stimulating, pupil-enlarging patisserie photos online of Hotel Café Royal’s Executive Pastry Chef, Sarah Barber. It was several temptations too many.

Within 24 hours I was in the hotel’s Oscar Wilde Bar for some Monday Motivation. Once seated, I was also seduced by the ornate decorative charm of the room (opened in 1865), the stories about Oscar Wilde, the attentive service and the mellifluous sounds of the grand piano, with a real professional pianist. Outside, Regent’s Street was busy and the skies blue;  inside it was golden, with the sounds of the piano draping the room in a peaceful sense of bliss.

Being of a colonial Anglo-Indian family, my parents had afternoon tea at 4.30 on the dot every day. Tea with homemade scones and cake, served from an old clunking trolley in the sun room. When we visited my grandmother in Devon, tea was served from a silver tea-pot. Personally, I prefer ceramic ones.

… introduced by the Portuguese queen

Catherine of Braganza, the Portuguese queen of Charles II introduced tea to the English. Then it was the Duchess of Bedford, a friend of Queen Victoria’s, who started the trend in the 1860s of having a nibble to eat with her tea in the late afternoon and inviting friends to join her.

With the piano playing, and sitting in the same gilded room where Oscar Wilde would dine daily, we started with an amuse bouche of a Goat’s Cheese & Pickled Apple Muffin. The muffin came with a little pipette that you squeezed to release the apple juice into the base. I love such simple interactions. It makes eating even more fun.

Sarah is making some of the most exciting cake waves in London. The day I was eating her cakes, Vogue UK had chosen her Royal Easter Egg  as one of this year’s Best Luxury Easter Eggs. Before Hotel Café Royal, she has been Head Pastry Chef at the Corinthia, ME London, Yauatcha and Diner at Heston Blummental. She has also worked at the Mandarin Oriental, The Ritz and The Connaught.

My tea was a Jasmin Pearls green tea, with whole leaves. If I had eaten later, I would have taken a Black Tea. I had chosen the 2pm slot as my Afternoon Tea was replacing lunch.

Then came a palette cleanser of raspberry, hibiscus, apple juice and mint… preparing the taste buds for all things sugary.

We started with scones, with clotted cream & homemade strawberry jam. I went for the Devon way of preparing them; cream first and jam on top. In Cornwall it’s jam first and cream on top. Devon-style way makes more sense to me as cream is heavier than the jam, or it was at the Hotel Café Royal.

The first ‘cakes’ were a Pistachio & Orange Macaroon with rabbit ears in honour of Easter and a Blueberry & Lemon Meringue Pie, graced with a viola flower.

Then came a take on Crema Catalana – the Catalan version of crème brulée, but not ‘burnt’ – with cherries and a pastry base… and a little Easter egg on top; together with an éclair… with perfect consistency in the filling and texture in the pastry.

By now I had moved on to the Queensberry tea, a ‘bright, colourful and appealing’ herbal infusion, with lemon peel, fennel & liquorice root. The tea was named after the Marquis of Queensberry, whose son, Bosey, was Oscar Wilde’s love.

Lastly were three types of cake: a Praline Hazelnut Loaf, Carrot Cake with Cream Cheese Filling and a Simnel Cake with one egg on top… I presume the other ten eggs were somewhere else, as this traditional cake – sometimes served on Mother’s Day – has 11 eggs for the 11 apostles, minus Judas.

I had been starving myself all day, but I just could not eat all the cakes: the remainder went home with me in a very sophisticated ‘doggy’ bag.

The hotel had a fascinating little booklet on tea and teatime. I carefully read how to hold my tea cup, as shown below. The spoon should be on the outer side of the cup with the handle at the same angle as the cup handle. If the cup is held correctly, the little finger “will then automatically rise”. Got it!

The Café at Café Royal

There were no traditional hot cross buns on the menu, but I had already spotted some amazing ones that Sarah had made – I’ve seen them on Instagram – that can be found at The Café at Café Royal, next door to the main hotel entrance.  I will be back before Easter ends to try one. For a quick cup of tea and a cake while in the area, The Café seems the perfect spot… I would also love to stay at the hotel, with its 18-metre (60-foot) swimming-pool, a real luxury for me.

Afternoon Tea is served daily at Hotel Café Royal with the first sitting at 2pm. The special Easter Tea is served until April 17. With tea, the price is £42; with a glass of Laurent-Perrier Brut £55 or with Rosé £65. Best to book.