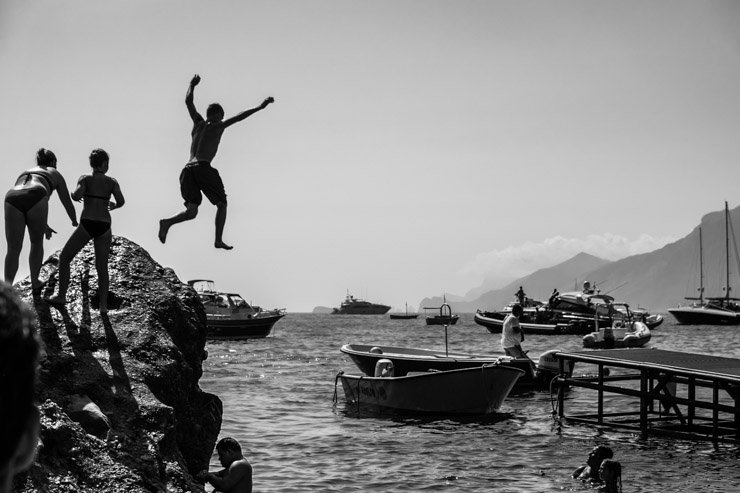 Adolfo Bella and his American wife Lucille opened Da Adolfo restaurant 50 years ago on a small beach along the Amalfi coast from Positano.

After being a prisoner of war in Crete during the Second World War and then joining the Italian partisan movement, Adolfo met, fell in love & married Lucille in Positano.

Their love for the sea and a simple life attracted them to set up what has become a Positano institution, with its cinematic 1960s’ Mediterranean feel, seductive charm and ‘wild’ simplicity.

For Da Adolfo, now run by Adolfo’s son, Sergio, is more than a restaurant; it’s where fun-loving, mainly local people, gather to enjoy themselves, with good local food & wine, the blue of the open sea & the sharing of much laughter & stories.

I escaped there on the last Sunday in August.

Arriving in Positano, I stopped off for a coffee, and then wandered down to the jetty to look for an open fishing boat topped by a large wooden fish painted red – the emblem of Da Adolfo.

The boat trip, laid on for free for clients, took less than 15 minutes, with the sun out, the sea shimmering and a bronzed Italian sailor at the helm.

It had taken three weeks to get through to Da Adolfo on the phone to book a table. You can only book by phone.  And that is the beauty of this place… it’s simplicity.

As for the locals, John Steinbeck wrote about the people of Positano back in 1953 for Harper’s Bazaar: “They just don’t give a damn. They have been living here since before recorded history and they don’t intend to change now. They don’t have much but they like what they have and will not move over for a buck.” I like a rebellious spirit.

“The atmosphere is so special. Just you wait when everyone arrives for lunch,” said my neighbour on the boat going over, an Italian from Positano who worked in Bedford. I commiserated. Bedford versus Amalfi.  No match.

On arrival I had a homemade lemonade at the bar with my new-found friend, who had just spotted her nephew jumping off the rock, and then hired a deck chair for the day at Euros8. Like all beaches on the Amalfi, space is at a premium, but never once did I feel intimidated by my neighbours 10cm away. Respect is the byword.

A local Costa D’Amalfi Ravello Bianco by Marisa Cuomo, 60% falanghina and 40% biancolella, from nearby Furore.  I’d never heard of these grape varieties before, but then Italy does have more than 510 varieties used for wine. I thought I would try the local speciality… white wine with slices of fresh peach to make a refreshing summer drink.

I was seated next to an American couple from North Carolina. They were in Italy to stock up on Barolo and to attend the music festival at Ravello. Their “small” cellar had about 1,000 bottles. Mine has 5.

Total cost Euros45.65, with one glass of wine and water. When the American couple had left, I had reached over and finished the dregs of their pitcher, so the one glass of wine was really one and a half, and I had eaten all the peach slices. My quarter Scottish blood leaves nothing to waste.

View from the jetty

The view began to clear as the afternoon went by. The main island of the Li Galli archipelago was visible – once home to Rudolf Nureyev and now available to rent – and also Capri Faraglione, the three stacks of rock that rise up off the coast of Capri.

Other ‘piaceri’ at Da Adolfo

I left at 5pm, while the vibe was still going strong. Pulling into the harbour at Positano was like arriving at a big city. I hopped directly onto the bus that leaves from the top of the town to return to my hotel in Praiano, a half-hour trip along the vertiginous coastal cliffs, past the famed luxury hotel destinations of Le Sirenuse and Il San Pietro di Positano. I had no appetite to stop, even if it was by then the hour to go to Franco’s bar at Le Sirenuse.

You can find John Steinbeck’s full article on Positano on the website of Le Sirenuse. The hotel also creates my favourite perfume, which I wear every day, Jardin du Poete, Eau d’Italie.

For my post on Praiano, also on the Amalfi coast.