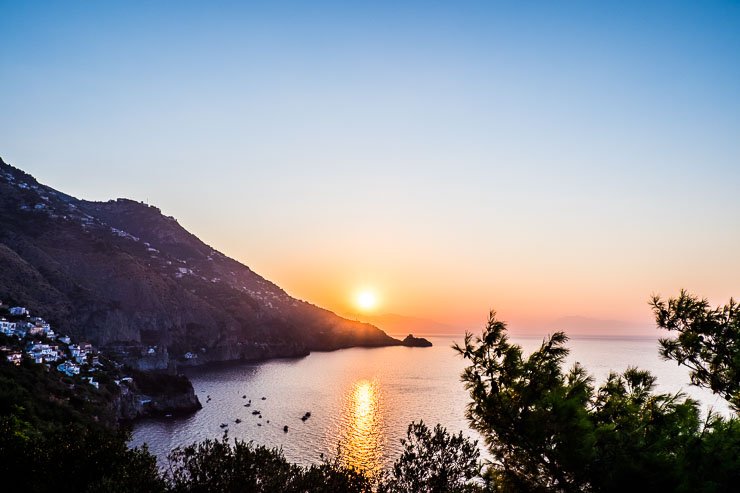 07 Sep Sunrise to sunset: Praiano on the Amalfi

My idea of paradise is to watch the sun rise up from the sea into a clear blue sky in the early morning and then to see it sink below the horizon at the end of the day. I found all that in Praiano, a small town near Positano, on Italy’s Amalfi coast.

The last time I was blessed with such a chance was in Sri Lanka, during my yoga retreat on the beach.  This time I did not have to go so far… plane to Naples from London, and then less than two hours’ drive to Praiano.

I was heading out for a weekend of wedding celebrations. An amazing wedding. A wedding that brought a sense of romance to the world, a sense more profound and more beautiful than read in any book or watched in any film.

The result. Apart from having a lot of fun and making new friends, I fell in love with Praiano. It’s smaller, quieter, less touristy than Positano, and yet only 15 minutes or so away by water taxi or car.

Praiano makes for a perfect quiet weekend getaway from late spring to early autumn. In winter, a lot of the hotels are closed.

Looking at Praiano on Google Maps can be confusing. The secret is to think of the coastline as one long cliff at between 45 and 80 degrees plunging into a deep blue sea. The coves open up to reveal pockets of pebbly beaches. Some you can swim in. Others you can’t. All are reached by steps. I love pebbles, as long as they are small, so easier to walk on, as there’s no sand to get into every nook and cranny.

The SS163 road winds along the Amalfi coast about half way up the cliff. The road is the lifeline of all activity on the coast, but it’s not for the faint-hearted driver. It’s single lane, in each direction, with no pavement, but everyone walks along it, quite safely, or so it seems.

The secret to finding a hotel in Praiano is to not be too far from the SS163 road – unless you want an even loftier view and to go everywhere by car. Apart from the vibrant Bar del Sole and the piazza in front of the Church of San Gennaro, the SS163 is the centre of town life in Praiano.

Hotels are family run. The most designer of them all is the 5-star Casa Angelina. Others that I liked the look of were the Hotel Onda Verde, overlooking the beach at Marina di Praia, and Hotel Costa Diva, with its restaurant tables on the terrace or in the gardens looking out to sea. Both looked romantic. As I am saving money – to afford more trips – I stayed at the Hotel Open Gate. Not luxury, but lovely family, and sea views.

In summer, life is all about the beach. And there are 2, at either end of Praiano – with a water taxi on hand to ferry you between them.

Gavitella is the main beach.  This is rocks, sun lounges, bars and a slipway for little boats. I went down there at 7.30am and there was only one person swimming. So peaceful. Count a couple of hundred steps to get down there, but that’s all part of the experience.

Marina di Praia is at the other end of town, just below the very popular Africana night club. Here there’s a little pebble beach with sun loungers, restaurants, even a small church. It might be crowded, but people are respectful, and mainly Italian.

Now a few words about the spectacular wedding:

On our last morning we went shopping in Positano. The water taxi picked us up at the Marina di Praia beach, stopped off in a grotto for us to take pictures, and then took us past Da Adolfo Restaurant and, perched on a cliff above, the 5-star hotel Il San Pietro di Positano.

Arriving in Positano, another 5-star hotel, Le Sirenuse could be seen, with its emblematic ox blood-coloured facades, at the top of town. That’s where I get my Eau d’Italie Jardin du Poète perfume from, or at least via Les Senteurs in London.

The public bus is an adventure. The Curreri Viaggi line runs directly from the airport every hour to Sorrento (still not the Amalfi), where I stopped off for gnocci alla sorrentina, with tomato and mozzarella, at the Leone Rosso Restaurant by the bus terminal. I then hopped onto the Sita service to Praiano. The whole trip took me more than 3 hours, although I lost track of time, in an Italian way.

Far easier is by taxi. On the way back, I took a shared taxi, organised by the very efficient easypickup.it, at Euros50. (No, I don’t get commission.) It would have been cheaper if I had booked in advance.

It’s taken me three years to remember how to say this word. These are the cinnamon buns of Naples.

Crisp layers of fine pastry, shaped like a shell, filled with ricotta, some sugar and a touch of candied orange peel and cinnamon, to give a salty-sugary taste. This with a Neapolitan espresso, the best coffee in the world, is my favourite breakfast. An excellent send-off before returning to London.

For my blog post on Da Adolfo restaurant – a boat ride from Positano.