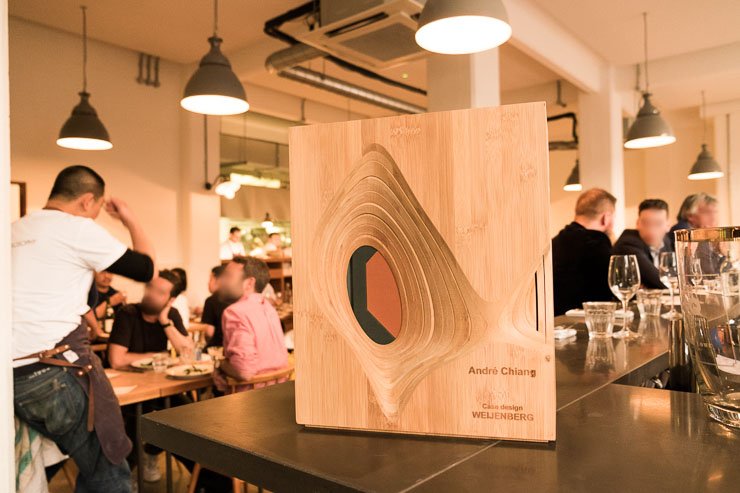 ‘There is always a continuation, never an end,’ writes André Chiang in his book Octaphilosophy: The Eight Elements of Restaurant André. Usually I resort to Marcus Aurelius’ Meditations for guidance, but today I am buoyed by reassuring feelings from one of Asia’s top chefs.

André Chiang was in London this Wednesday evening, as the latest of the guest chefs at Lyle’s in Shoreditch, housed in the same building as the always-uber-trendy Shoreditch House members’ club.

André was born in Taiwan, & moved to Japan with his mother, who worked as a chef. He then moved to France when he was 18 to work & learn with such big names as Jacques & Laurent Pourcel (Le Jardin des Sens – Montpellier), Pierre Gagnaire (Pierre Gagnaire – Paris), Michel Troisgros (La Maison Troisgros – Roanne), Pascal Barbot (Astrance – Paris) and Joël Robuchon (whose restaurants around the world have more Michelin stars in total than any other chef).

The eight elements of his Octaphilosophy are:

André visited me at my table three times on the Wednesday evening at Lyle’s; to say hello, to pour the duck liver sauce over one of the main courses & to explain the dessert.  He paid that same level of attention to all the diners, & when he was back in the kitchen, where he spent most of the evening, you could feel that same energy of calm focus from right across the room – an energy that can only come from the zen mix of Chinese, Japanese & French cultures.

I was so star struck when he came over to my table that I stupidly didn’t know what to ask him. This was not helped by the fact that I’d arrived feeling drained by the grey skies of a London summer and having worked too hard that afternoon. Must try better!

What I ate & drank at Lyle’s

The granular texture of charcoal bread contrasted with the smoothness & sweetness of Mylor prawns (from the town of Mylor in Cornwall) and piquillo, the sweet red peppers found traditionally in Northern Spain.

The bread, which I dunked into the prawns, was served on a bed of charcoal. Luckily the waiter pointed out which was which.I’ve only tried orange wine once, & didn’t really rate it. Must have been the wrong one.

For the first four courses at Lyle’s, the sommelier recommended Côtillon des Dames by Jean-Yves Péron, with the white Savoy grape variety Jacquère grape variety. Really good. So the Alps is not just about cheese and skiing, it’s also about wine.

The metallic taste of bottarga, the salted, cured grey mullet roe found in Italy, contrasted divinely with the meaty flavours of the raw Dexter rib, as well as the bright orange bringing out the tawny colours of the meat.

Next came, Tomatoes, Lardo & Fried Bread. The sweetness of the tomatoes were no way superior to the insipid organic tomatoes from Waitrose that I had eaten at lunchtime, and contrasted brilliantly with the piquancy of the sauce. There was no bread as such, just flavours of fried bread, not that I would have guessed.

Now, I was not looking forward to the Duck Heart, Liver & Tongue. Last week in France, I had been mocked for not eating pig’s ears. This time, I was determined to prove that I could eat duck’s heart, liver and tongue & I sent my French friends a What’s App pic to prove that I had… & they did not reply.

Luckily everything was chopped so finely that I couldn’t determine which bits were the tongue, or not. My emotions moved from ‘expectation of the worst’, ‘confusion as to what the ingredient were’ to ‘enjoyment’. Combined with the sweetness of the butternut, the dill, the ducks’ liver sauce, accompanied by a segment of vanilla butternut jelly filled with duck yolk, this dish turned out to be my favourite.

Then followed Turbot, with Samphire and Whey Butter … a simple, great combination. This was where I switched wines, to a Chardonnay from Frédéric Cossard in Burgundy.

Mangalitsa Collar, Peas & Asparagus. Mangalitsa is a heritage breed originally from Hungary and seen by many as the Kobe beef of pork. The pigs are hairy.

I have another friend in France who judges a restaurant by its desserts… whether they finish off the meal nicely, or not. The balance was perfect that evening: a mix of English, Italian & French influences… the caramel, bananas and cream of Banoffee Pie;  the gelato and coffee of Affogato; & the French version of the marshmallow, Guimauve. Nice but not too naughty.

To finish, to go with the coffee, a sourdough yeast chocolate and a lemon thyme brown butter cake.

is published by Phaidon