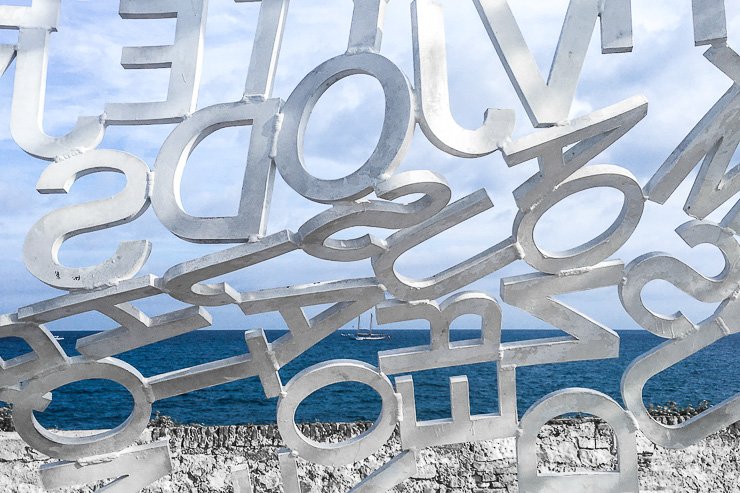 Flash people; flash boats. That was my perception of Antibes on the Côte d’Azur. One-time resident F Scott Fitzgerald of Great Gatsby fame said the French Riviera – as the Côte d’Azur is known in English – attracted the “notable” (for whatever reason) and the “fashionable”. It still does. Antibes’s Port de Vauban is the biggest ‘pleasure harbour’ in the Mediterranean.

Given that life is all about learning (and pleasure), one thing I learnt from my visit to Antibes this September, as I surveyed the boats in the harbour, is that I can be resentful of flash people with flash boats.

My idea of being flash is drinking champagne for the sake of it, rather than drinking Louis Roederer champagne (said by many in the know to be the best of the champagne houses, together with Krug), and having a palatial (motor) boat with sharp lines and jagged features.

According to my friend Felicity Morse, author of Give a F**k, such a prejudiced belief may limit my earning power. So here’s to being more conscious, and to the end of such limiting thoughts, as I definitely want to be rich  – in a subtle, stylish way rather than being flash!

Putting ‘flash’ aside, the Côte d’Azur is no doubt about glamour. This glamour lives on from the roaring 1920s and before. Alongside this is a raw, earthy vibe – one often linked to cultures facing the sea. This makes the town of Antibes a fun and pleasant place to visit, especially outside the busy months of July and August.

The coastline still offers a “coast of light, of warm breezes, and mysterious balmy forests“, as described by the French poet, Stephen Liégeard who gave the Côte d’Azur its name in 1887. Claude Monet lived and painted in Antibes. So did Picasso. There is even a Picasso Museum in the town; the former home of the Grimaldi family of Monaco fame. I once taught swimming to Stéphanie Grimaldi, even thought she could swim far better than me.

F Scott Fitzgerald arrived from the US to take up residence in Antibes in 1925, with his wife Zelda. They lived in the Cap d’Antibes, a low headland jutting out into the Mediterranean, with umbrella-shaped Aleppo pines, and craggy coves with deep blue water.

The couple stayed a year in what is now the Hotel Belles Rives. It was from here that the author wrote Tender is the Night, about parties (maybe wild, but I haven’t got to that bit yet) and swimming in the sea on the mystical Côte d’Azur, at that time home to many dollar-rich Americans.

Me on the Côte d’Azur

I was in Antibes – staying in the old, mediaeval town – for a special party of special friends, who have a beautiful villa in the Cap d’Antibes, sheltered by pines and looking west over the sea, towards the sunsets.

Yes, there was lots of champagne, Louis Roederer champagne… these are stylish people, not flash … and it was a lot of fun. Antibes is for everyone, I thought, having learnt from my stay. That is everyone who is captured by the “diffused magic of the hot sweet South”, as F Scott Fitzgerald called it. Antibes is definitely for me, so here are some suggestions:

The coastal path of Cap d’Antibes

For nature lovers and sea lovers, le sentier littoral of the Cap d’Antibes is a must.

We took a taxi to Plage Joseph, on the eastern side of the Cape. The perfect place for sunrises, although we were too late for that, having arrived at 8.30am.

First, coffee, croissant and fresh orange juice on the beach. Then, the wiggly walk, up and down, but not too strenuous, along the coastal path.

At this early hour, we passed only a few people… and each and everyone of them said “bonjour”.

The coastal path takes you past the grounds of Château de la Croë, home to the Duke and Duchess of Windsor in the 1930s and then to Aristotle Onassis, until his wife caught him in bed with one of her friends, and now to Roman Abramovich, owner of Chelsea Football Club.

Swimming off a bathing platform carved out of the rock .. only a scuba diver and a moored yacht were with me in the water.

One local woman asked how far we were walking. She suggested that we went as far as Billionaire’s Bay. The sun was getting hot, even though it was only about ten o’clock. As F Scott Fitzgerald writes in Tender is the Night: “Noon dominated sea and sky.” We went on a bit further and then cut inland instead, to return to old Antibes.

Beware: our wifi did not work on the Cap d’Antibes, so we went back to the old town by bus rather than taxi.

The old town of Antibes has its back to the sea; a legacy from the days of maritime invaders of a more violent kind than those of today.

This part of town is for lovers of colourful markets; pedestrianised, narrow streets; provençal food and wine; and old stone walls and buildings … and, of course, blue sky and blue sea.

With its one Michelin star, Restaurant Figuier de Saint-Esprit (see the website for magnificent drone pics of Antibes) was recommended by our friends. It’s down a lovely little back street near the sea wall. Even though we did not eat here, I liked the vibe of this place. I signalled through the open door to ask if I could take a photo, and was met with a pose.

Oh I feel bad, I dragged two of my fellow revellers for two lunches of aïoli provençal! Aïoli is a mayonnaise with plenty of raw garlic. It is served with a feast of boiled vegetables and salt cod. I just got carried away with all things local.

Our first aïoli was on the Thursday, at La Petite Escale, in the rue Fourmillière, on the way to the train station. The cod was fresh, the restaurant was small and off the beaten tourist track, run by husband and wife, or so I presumed … perfect for lunch when the old town can get very busy.

Then came Friday. In Provence, the tradition is for meatless Fridays and for aïoli provençal. This time we went to the traditional Le Bistro du Coin, also small, and down the road from the market, where the dish was served with salt cod, octopus and whelks.

The food market is held each morning until 1pm, except on Mondays in winter.

To take home, I bought corn so sweet and tender, grown in someone’s garden, that I didn’t need to cook it; sheep’s cheese from Sardinia and coppa from Corsica.  The Côte d’Azur has a strong connection, or so it seems, with Corsica and Sardinia. And the figs… again from someone’s garden, and so sweet that they never got home.

We sat outside – no seats inside – at La Torref De Fersen, in the quiet rue de Fersen. Great coffee and great fruit juice by Atelier Patrick Font. I sampled the fig, black tomato and the peach juice – all good.

Only residents can take their cars into the old part of town, with its granite setts…

Best ice cream in the South of France

Gelataria del Porto … near the market. Mine was passion fruit and mango… apologies for the lick marks in the photo… desire for eating good ice cream is stronger than the desire to take photos.

On the first evening we ate at Chez Jeanne. I found out about Restaurant Jeanne from the brilliant Raisin natural wine app.

You need to book. It is run by two sisters. Here is one of them, as she served us a very nice wine: Les Terres Blanches, Gamay de Bouze ‘Pot d’Vache’, from the Loire Valley.

The wine was perfect for what we ate… and it was natural wine, so no ‘stuff’ added. I am not a paté or cold meat person, but what we ate was divine… made by the fifth generation of producers. Then the aubergine dish – a take on parmigiana. Followed by dessert (not featured).

Antibes is about the colour blue: blue sky, blue sea. The first day I swam off the Cap d’Antibes. The second day at the Plage de la Gravette. This is a sandy beach in a wide cove, just ten minutes’ walk from the old town, near Port Vauban. Perfect. Not too crowded in September.

Other addresses in Old Antibes