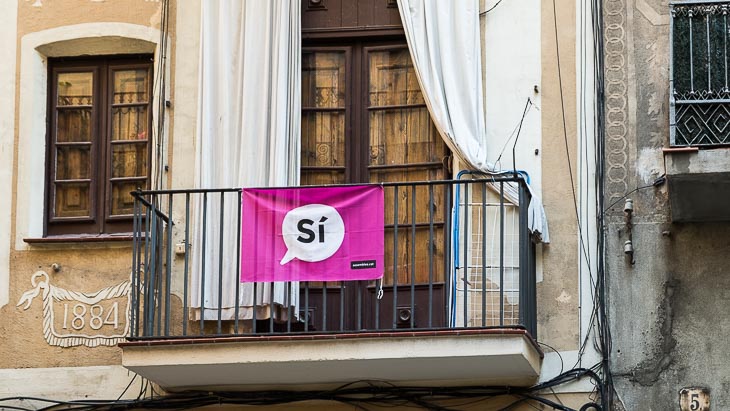 The best time to visit the Mediterranean is in the autumn. The skies are clear, the temperatures cooler and the crowds are more dispersed. It’s also all the better for seeing street art. Or is it graffiti? Or even performance art? In this case it was political, but that does not have to stop it from being art.

I have always been fascinated by expression through graffiti. Back in the 1990s I did a student photography project on graffiti by ETA (the Basque separatist movment) in the (beautiful Basque) landscape.

Politics was a hot topic in the autumn of 2017 in Barcelona. Catalan independence banners and flags abounded in the city.  I also spotted a few pro-Spanish banners, including one draping down from the house where my son was born in the neighbourhood of Gracià.

The moments that I captured in 2017 reflected the spirit of the time, a spirit that felt unable to be expressed through the ballot box or represented by their politicians. This spirit lives on, whether in our bodies, our minds, our spirits, to be passed on through our DNA.

That graffiti also lives on in me. It made me stop. It caused an emotional reaction in me through my ‘mirror neurons’, sparked by who I am and what I have lived, In the end we are all linked, around the world, and through the generations – and often through art.

I start with one of Europe’s best cheese shops, Vila Viniteca in the old part of the city, Ciutat Vella. The store is particularly good for goats’ and sheep’s cheese, for which Catalonia is renowned.  You can also find amazing hand-cut jamón serrano and lots of other delicacies from Spain.

A few doors down is Vila Viniteca’s wine store, and in the other direction a good bakery. This has turned the quiet Aguilers Street, between the 14th century Basilica de Santa Maria del Mar and the busy Via Laietana, into an easy-to-reach foodie destination.

Bon Mercat in Jaume I Street for a coffee with the local functionaries who work in the town hall and to support their Oragutan Coffee Project.

Cafés El Magnífico in Argenteria Street, near Senyor Parellada, is considered THE place for coffee in Barcelona, but it doesn’t open till 9.30am.

By the time we arrived at Pastisseria Hofmann, on the attractive Passeig del Born, it was 5pm and nearly all the cakes had gone. The Hofmann is a renowned Catalan gastronomic family. There’s also the Hofmann Culinary School, Michelin-starred Restaurante Hofmann, Taverna Hofmann and Arroz Hofmann. 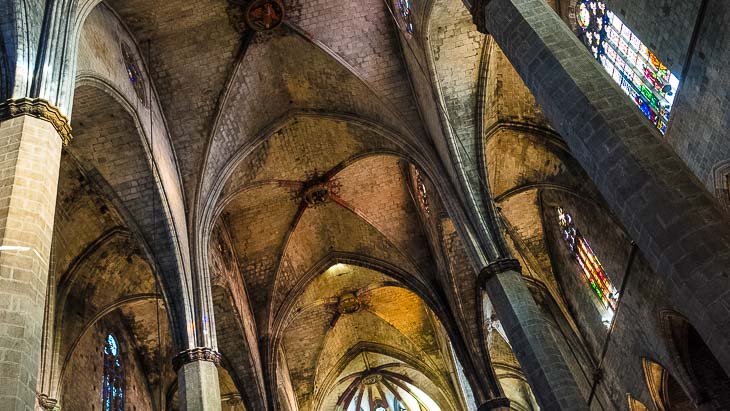 Dr Stravinksi cocktail bar in Mirallers Streets, behind Argenteria, was my favourite spot for a kombucha nightcap – if not something stronger.

I love all things Japanese. They blend heritage with craftsmanship and passion. Pastisseria Ochiai is in the Eixample 19th century neighbourhood of Barcelona.

Award-winning pastry chef Takashi Ochiai opened Pastisseria Ochiai in 1983. Since then he has opened another shop, and last year the Aula Ochiai school, where you can learn how to make mochi, croissants and cakes using green tea.

Takashi is the son of rice farmers in the northeast Japan, and came to Europe to advance his skills as a pastelero, and never returned to Japan.

The mochi, made from rice flour with a creamy filling, were divine. My first one was filled with green tea. The one below is with chestnut. Also very good are the green tea croissants.

Most of the restaurants in Barceloneta, the old district between the harbour and the beach, are for the undiscerning tourist. La Barra is an exception. It is part of the group run by chef Carles Abellán. This is Barcelona as city of design.

A xiringuito was originally a shack down on the beach where you can eat seafood. The Escribà part of the name comes from one of Barcelona’s best known families in the world of gastronomy, primarily chocolate. The paella is served and eaten with wooden spoons.

My glass of L’Écrivan from Monsant was 100% Macabeu, a local grape also found in cava. L’Écrivan is produced by Alfredo Arribas, a friend of Joan Escribà, and an internationally acclaimed architect. Friendships run deep in Catalonia, so do connections … and so does architecture.

For my other posts on Catalonia.