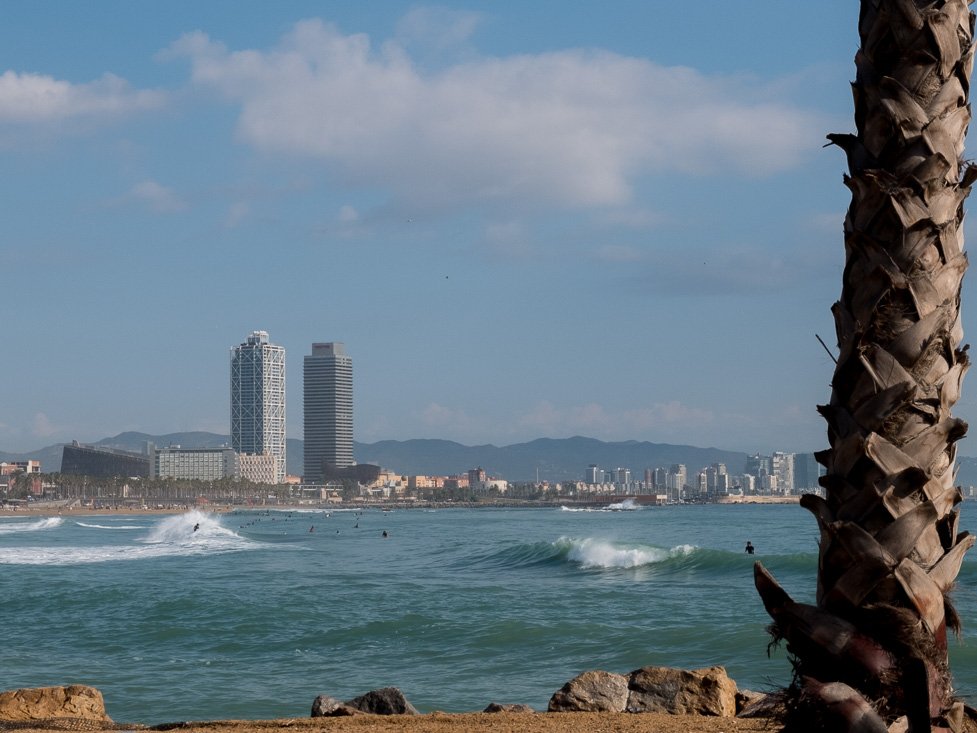 02 Nov Barcelona: the Rio of Europe… but better

With the end-of-year festivities fast approaching, my thoughts go to Barcelona, where the winter sun is a welcome antidote to the grey gloom of Northern Europe.

Earlier this autumn, I returned to Barcelona after an absence of 20 years. This was the city where I had lived during the Olympic Games of 1992 and where my son had been born – a city which has a special place in my heart.

I even speak Catalan, of a sort, having studied at the Universitat Politècnica de Catalunya and taken part in work experience at TV3, the Catalan TV station – and yes it did mean I picked up free tickets to see FC Barça play.

After a quick swim in Sitges, I boarded the train for the 30-minute journey to Barcelona, and then headed for lunch at Roca Moo. This was to be my big culinary experience of the day, in a city that has 22 Michelin-starred restaurants.

Roca Moo is on the ground floor of the Hotel Omm, near the top of the Passeig de Gràcia, one of the city’s main shopping boulevards.  It is overseen by Joan Roca, the chef behind the ‘world’s best restaurant’, El Celler de Can Roca, in Girona, further north, towards the French border.

For the best view – and not to feel like a lemon sitting on my own at a table – I chose to sit at the bar. The restaurant was not that full. The Roca Bar, on the other side of the bookshelf-like divide, was much more animated. But then Roca Moo is a place for serious foodies.

“I feel like a lemon sitting on my own at a table.”

My neighbour at the bar was a chef from Chicago, tall & blond like his Scandinavian ancestors. I never caught his name but we had a fun conversation… about the Japanese restaurant he was planning to open in his home town, his visit to the other great Spanish culinary capital, San Sebastian, and about Mexican cuisine, one of the world’s greatest.

The menu at Roca Moo

My new for-the-moment friend had chosen the full experience: the Joan Roca Menu at €110 + €44 for matching wines. Looking to stretch my Euros, I had chosen the amazing-value Moo Lunch Menu, including a glass of wine, water & coffee, or in my case hoji-cha (Japanese rice tea), for €49 (£35 or US$54)… a snip for a Londoner.

The Moo Lunch Menu was made up an appetiser, then 3 different courses, followed by ‘tea-time’. Each course offered a combination of tastes, flavours & textures introduced by the chef in gastronomic terms that sounded like poetry. I started to write them down, but soon gave up… just enjoy, I thought!

For my glass of wine, I chose a white… Can Feixes Blanc Selecció 2012, made in the hills of the nearby denominació d’origen of Penedès. Like so many Catalan whites, it was slightly pétillant… to give character & zest, just like the Catalans themselves. 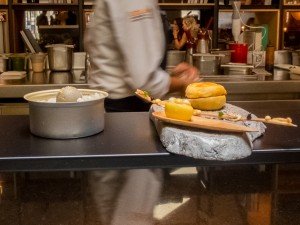 To excite the palate… 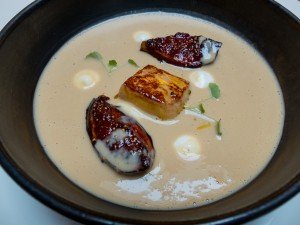 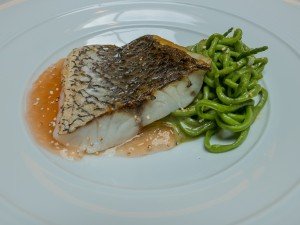 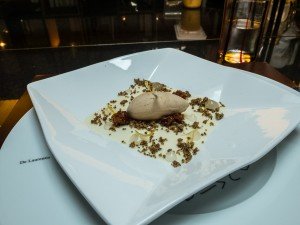 The view from the bar.

Visiting the district of Gràcia

I was tempted to go for a second glass of wine at Roca Moo, but no, I thought, I want to pace myself, as my next visit was to Viblioteca Wine & Cheese Bar, recommended to me by local wine blogger Zoltan Nagy & which offered a different, more intimate experience, in the ‘popular’ district of Gràcia.

My post-lunch walk took me past my first flat in Barcelona, in Mozart street. The front door had, er, been decorated… with graffiti. I had only lived there for a few months, & then realised that in those days, as a foreign, freelance journalist, I needed a better address – on the other side of Gràcia – if I were to hobnob with the glitterati of Barcelona.

With the passing of 20 years since I was last in Barcelona, I had forgotten a key rule… opening hours are baffling in Spain, so always check first. I arrived at Viblioteca to find that it only opened in the evening …

to the Barcelona beach….

To drown my disappointment, I headed for the beach. Six stops on the city’s metro, and I was in Barceloneta, the old district by the sea, and where the fishermen used to live. I had redrawn my plans to take in one of the addresses of the culinary empire of another Catalan, Carles Abellán.

Ex-El Bulli, like so many of the great chefs in Barcelona, Abellán came to fame with Comerç 24, where he gained a Michelin star and a reputation for creative tapas.

For me, the Abellán experience was a zumo energético at La Guingueta, with a view over to the sail-shaped W Barcelona Hotel, home to another Abellán restaurant – Bravo.

My juice was designed to stimulate the circulation and pump me with antioxidants…  a blend of stevia, banana, pineapple, spinach & wheat grass. It definitely did fill me with energy.

W Barcelona looks uncannily like a half-sized Bourj Al Arab, the 7-star hotel in Dubai.  One Barcelona resident told me that the W should have been ready first, but planning hiccups meant it took a while to get built. Barcelona is a city that thinks big, especially for its size.

People of all ages & nationalities were out enjoying the seafront… eating, drinking, jogging, surfing (too rough for swimming that afternoon), walking, looking at the sea… living and breathing life. The sun was beginning to edge down. It was time to move on.

I had this idea of staying in Barcelona for an early (9pm) evening meal, and then catching the last train back to Sitges.

My next quest was to find Yauarcan, the Mexican restaurant of Albert Adrià, the younger brother of Ferran Adrià, the name behind the home of molecular cuisine, El Bulli, & who is now busy with El Bulli Foundation.

The address I had was in a street whose name sounded like a rock band, Doctor Dou, in El Raval, a once dodgy district where, all those years ago, I had done a report for The Sun tabloid newspaper on a vicar’s daughter working in a strip club.

I never found the restaurant.  As my son is always telling me, the world changes very quickly nowadays: fashions come and go, and restaurants come and go.

Albert Adrià, together with his brother Ferran, has meanwhile put his heart in his ‘el Barri neighbourhood’ – a one-stop global culinary destination in the nearby Paral.lel area near Montjuic, and in my day only famous for El Molino cabaret hall.

El Barri offers six Adrià restaurants: Tickets, where my Chicago chef friend was eating that night, Pakta, Bodega 1900, and Hoja Santa and Nino Viejo, both with a Mexican influence, and next year (2016) 41° reopens as Enigma.

In the meantime, earlier this year, Albert Adrià was awarded the title of World’s Best Pastry Chef, while Tickets entered into the ranks of the Top 50 of the World’s Best Restaurants. And this summer the Adrià brothers opened Heart in Palma de Mallorca, a ‘gastrofiesta‘ concept, in partnership with Guy Laliberté, the creator of Cirque du Soleil. There is no stopping the Adrià empire!

A stroll through El Raval

With so many different restaurants, and a central reservation number to ring, it was all too much for me.  I prefer to check out a restaurant by sauntering by… and Paral.lel was that bit further to walk. Instead, I wandered around the streets of El Raval, near the Barcelona Museum of Contemporary Art (MACBA).

The locals had pointed me in the direction of the Dos Palillos restaurant, part of the Hotel Camper, as in the eponymous shoe brand from Mallorca. A relaxed, informal looking restaurant presided over by Albert Raurich, also ex-El Bulli, and his Japanese sommelier/wife Tamae Imachi.

But by that time, I was deciding instead to return to Sitges. My evening meal of fine dining morphed into eating a bag of sun-packed Moscatel grapes that I had bought that morning from the Ninot food market near the Barcelona-Sants station. They were good, very good, from Teulada, down on Alicante’s Costa Blanca.

In the meantime, I won’t be waiting another 20 years to visit Barcelona.

Nuts. Yes, nuts. There are lots of shops in Barcelona, but my best buy was nuts from Casa Gispert. Roasted almonds to be precise. Casa Gispert, a Barcelona institution, also sells coffee, spices, olive oil & lots of other amazing foodie things.

I also bought a warming ‘winter’ tea of thyme, sage, mallow and liquorice which turns a beautiful cornflower blue once infused; and Cavaloca olive oil from the Priorat area, also known for its red wines.

And my blue-sky thoughts as I took the train back to Sitges:

You may like to read my other posts on Catalonia, which include a return visit to Barcelona, as well as visits to Girona, Sitges, Les Cols Restaurant near Olot and the Dalí Museum near Cadaques.