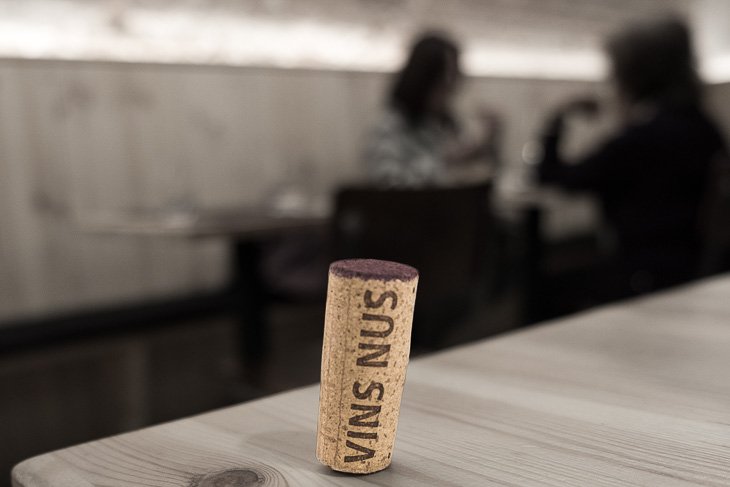 I found out about Teoric while at the picture framer’s in Barcelona. This was in the same block as where my son was born 22 years ago, in the district of Gràcia. I knew Teoric was my kind of place instantly – I had a gut sense. What was more, the picture framer’s daughter worked at Spring, one of my favourite London restaurants.

Teoric, or Teoric Taberna Gastronomica, did not disappoint. The desire to eat there became such an urge, like an itch that I needed to scratch, that we went straight there, to arrive 45 minutes before the shutters went up for lunch service at 1h30. We waited on a park bench in the busy Passeig de San Joan. What I do to eat well!

The restaurant is located in Carrer Bailèn, almost where the street meets Avinguda Diagonal; ten minutes’ walk to the Sagrada Familia and also, in the other direction, to Passeig de Gràcia, the city’s main upmarket shopping street. This part of Bailèn is not touristland. It’s in the Eixample district, near the grittier part of Gràcia, traditionally a working class area.

My link with Barcelona

A bit of background. I lived in Barcelona for 5 years. I studied at the Universitat Politècnica de Catalunya (in Catalan) and did an internship at Catalan TV station TV3. As a result, I put words in Catalan rather than Spanish, so I talk about the street being the carrer rather than the  calle. This November was the first time I’d stayed overnight in the city since I’d left more than 20 years ago. Yes, I’d been back to Barcelona in the meantime, but only for a day trip in 2015, staying in the nearby seaside town of Sitges.

Back to Teòric. If anyone asks me about Catalan cuisine, I recall the classic mar i muntanya combination, ‘sea and mountain‘. In particular, I love the traditional dish of chicken with langoustine, which came from the days when cheap and plentiful langoustine was added to the expensive delicacy of chicken, making the dish go further.

Catalonia offers everything – mountains, sea, sun, olives, wine, cheese, fruit, fish, vegetables. It truly is the land of sea and mountains. As a friend once said to me: “Here, you put a seed in the soil and it grows.” Whenever I plant seeds in my London garden, three times out of five they never emerge.

And this is at the heart of Teoric – that wicked combination of sea and mountain, brought to you with a sustainable approach, working directly with small, local producers. The experience is affordable, in a relaxed environment, serving ‘experiential’ dishes, small dishes for sharing, with culinary combinations and styles sufficient to keep the table conversation going all evening.

Oriol Casals, the chef, and Teo Rubio, front of house, opened Teoric in autumn 2016 – a year ago. Both are under 30 and are barcelonès pura cepa, from Barcelona to the bone, having met at school when they were 12 years old.

Casals went on to study Gastronomy and Culinary Art at the Basque Culinary Center in San Sebastian. For those who don’t know this centre, its international council reads like a top 13 of world chefs. To name a few: Joan Roca, Ferran Adrià, Gastón Acurio, Heston Blumenthal, Massimo Bottura and Rene Redzepi.

Oriol honed his trade with Andalusian chef Daní García, famed for his eponymous two Michelin-starred restaurant in Marbella, and at Pangea Restaurant in Monterrey, Mexico, one of Latin America’s top 20 restaurants. Nearer to home, he worked at the one Michelin-starred Lluerna in nearby Santa Coloma de Gramanet, and at Gat Blau in Barcelona, renowned for its sustainable ethos.

Teo, meanwhile, studied restaurant management at the Escola Hoteleria i Turisme de Barcelona. He went on to work at Comerç 24 (now closed) of Carles Abellan, who leads one of Barcelona’s most famous gastronomic empires, and at Tapas Brindisa, where he was head manager, in London’s Shoreditch district… he wanted to practise his English with me, but I wanted to practise my Catalan, and we were in Catalonia.

We ordered 8 dishes for two people. And it was a feast. In Barcelona, lunchtime usually starts at 2pm, so we had the restaurant to ourselves for a while.

It all started with the bread and the olive oil – so good that we just had to track them down, for more (see the end of the blog post – we found the bread).

What we ate at Teoric

More and more, I only drink natural wine. The mass-market wine industry is killing itself with the use of chemicals, and my body is protesting. The legal requirements to explain what’s in a bottle are minimal – this is better in France than in the UK, and in the UK I am reluctantly turning into a whisky drinker. And I only drink about natural wine or minimum intervention wine.

So when I know it’s natural wine and it’s good quality natural wine, I drink and when it isn’t I don’t drink. So at Teòric I drank. I even drank with a friend of mine who doesn’t drink at all. And we got through a whole bottle.

We went for the SiurAlta Antic 2012 of Alfredo Arribas‘ Vins Nus (naked wines). It is my best red wine ever (with a few others), especially for the price. It’s mainly Samsó, or Carignan, with a dash of Sumoll. We are talking 14°, and black cherries, blackberries, and a touch of pepper – nothing too harsh.

Now I found out when I got back to London that Alfredo Arribas used to be one of Barcelona’s most famous architects. And he gave it all up for wine. You can tell by his photos on Instagram, though, that he has an artistic streak.

His SiurAlta wines come from the high hills of Montsant, 700-800 metres high, and with twice the rain of the neighbouring wine region of Priorat. He is not so much into natural wines but into producing wines in a non-interventionist way, with the rhythm of the local conditions.

The quality of the food was so good at Teoric that we could not help but ask for a few local directions.

First up was 12 graus (12 degrees) cheese shop, where we stocked up to take home…

Then to make sandwiches for the flight (I never eat on planes), we stopped of at nearby Forn Sant Josep for some bread made using natural yeast.

That’s my kind of way to spend a day … hunting, eating well, drinking well, and socialising.