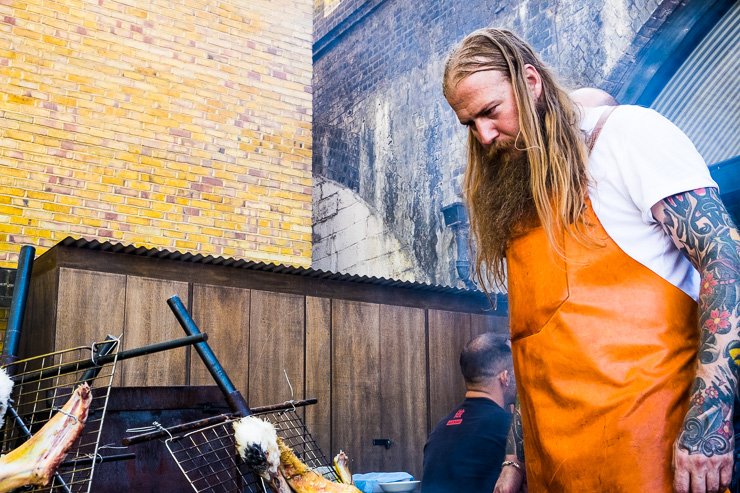 A wood-fired BBQ and a menu inspired by Gascony, the south-west region at the heart of French gastronomy, lends to a pretty powerful experience; especially with Andrew Clarke of up-coming restaurant concept Bastien as chef.

Andrew cuts a memorable figure, as if he had stepped straight out of the Vikings TV series. He has a broad chest, long beard, tied-back (sometimes) blond hair and vividly tattooed arms. I never got to see his legs.

Andrew hosted a pop-up Bastien, together with partner William Leigh, at Sager & Wilde last Sunday, an East End restaurant favoured by top chefs. If you think it’s far away, it isn’t… just one stop after Liverpool Street and a few minutes’ walk from Bethnal Green station.

His speciality is duck. And not any old duck: duck from Challans, a town south of the Loire, close enough to the Atlantic to feel the sea breeze. Challans duck is renowned for its succulent flavour, and for having less fat and a softer skin… ideal for the spit.

Neither was it any old wood. The wood that Sunday was sustainably sourced British oak. It needs to be hardwood.

People like wood fires. There is something primordial about them, since the days when our ancestors first discovered that spark. They are mesmerising; the flames, the sparks, the sizzling of the fat, the glowing embers. They’re about summer evenings, winter nights, laughter, story-telling, rituals, having fun, drinking, eating, feeling warm, contact with nature, our roots … as everyone gathers round in a soul-filling circle.

For Charles Darwin, the man behind the story of evolution, fire was one of the most significant achievements of humanity: cooking our food with fire allowed our ancestors to divert energy from chewing and digesting to developing their brains.

What I ate chez Bastien

I loved these gougères, made from choux pastry and filled with cep and bone marrow. They were small enough to pop in your mouth whole, and big enough to wrap your tongue round in a meaningful way.

The duck hearts below looked pretty phallic to me. I ordered them to prove my friends in France wrong as they tease me that I don’t eat offal.  The flavour was full, the texture soft & consistent, and I liked them.

With the salted mirabelle sauce, the slices of milky cobnuts and the whole roasted onions, the dish was divinely balanced. They were so good that I went on to order chicken’s hearts several times during my trip to Peru in October 2016.

For the wine, I took a glass of the biodynamic Château Bellevue, Lussac St-Emilion 2009. The wine was too good not to also take home a bottle.

What I missed out on was the Half a BBQ Challans Duck with Green Olives, Chicory & Mint. It was a plate for 2. I’ll just have to order it when Andrew opens Bastien.

Also on offer was Slow-grilled Leg of Lamb with Coco Beans, Girolles & Pecan Aillade – a twist on this classic French sauce made with garlic.

To spin out the afternoon, I went for a Hijiri Hojicha, a roasted green tea from Japan with a sweet tobacco taste. This was from one of my favourite suppliers, Postcard Teas. The tea came with a canelé, so typical of the Bordeaux area. (In the photo, I have bitten off the top.) I have tried other canelé since, and I’ve never found one so good, so moist and full of flavour.

I’ll be first in the queue when Bastien opens, hopefully some time soon.