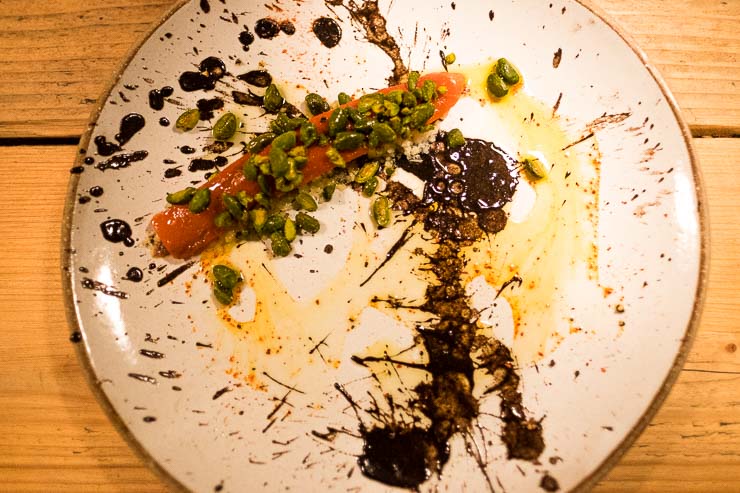 For all those fintech and startup workers moving to Berlin, you’re going to be OK. I know of a restaurant and bar where you can “share and destroy” small plates, and which provides “natural wines” and “spirited spirits”.

That’s the manifesto of Industry Standard, which opened last year in Neukölln, Berlin’s new capital of hip. This week they’ve popped up in London at Carousel, in Marylebone, which offers its diners a kaleidoscopic roster of guest chefs from around the world.

First a bit about Carousel. It’s a fascinating, fun concept, right up my street. Located on three floors, it’s like a magical den welcoming in the curious and wide-eyed of London and beyond.

Together with the restaurant, this creative space offers morning yoga, classes in life drawing, comedy and perfume making, and so the list goes on… and the founders are four cousins, all in their 20s.

My neighbour on the communal table said this had been 12 times to sample the food of one of a guest chef. He was particularly excited about Industry Standard.

Well me, I just feel like moving to Marylebone.

Industry Standard finds its inspiration from the sunny, southern parts of Europe. The reality, though, is that it’s just plain innovative while maintaining the emphasis on good quality ingredients… those produced with passion. I mean, come on, who’s ever heard of bone marrow combined with Marmite and Bourbon!

One of the main figures behind Industry Standard is Ramses Manneck, credited with having brought Mexican food to Berlin with the opening of the iconic Maria Bonita and Santa Maria restaurants. Now he’s doing his own thing. Below I have snapped him at Carousel with fellow Industry Standard chef, Finbar. 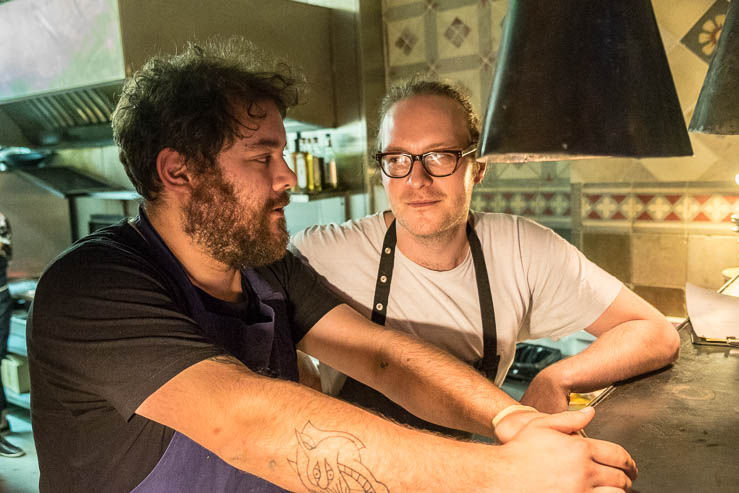 Usually with menus, I work through them in my blog chronologically. With Industry Standard, I just had to put the third course first … Bone Marrow & Marmite, as shown below, with a shot of Woodford Reserve Bourbon smoked with bone marrow juices.

The idea is that you eat the bone marrow, sprinkled with walnuts, and then pour the shot into the empty bones and suck it all in. The best Bourbon I’ve ever had! And even for a non-Marmite lover like me, the dish definitely wowed. 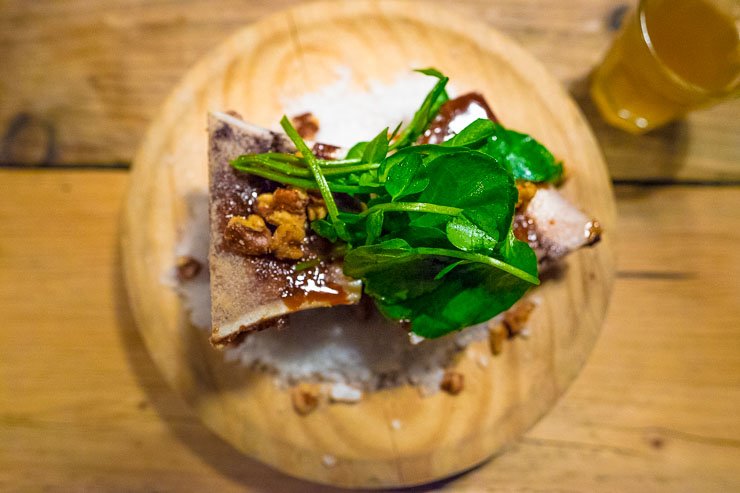 In reality the first dish was Paprika and Anchovies, as in the main featured picture… a classic mix and a lovely opening statement, visually more like a piece of modern art – good for Instagram… not enough chefs think of this.

And when it came to drinks, Cornish Gin, Angostura bitters, Feverfew tonic & orange, followed by a glass of  ‘natural’ Marcillac from France, made from Fer Servadou grapes.

I had hoped for some German natural wine, especially with RAW Wine fair coming up in Berlin on 27 November, but a few logistical problems meant the wine was arriving for the second day of the pop-up and I had come along on the first. 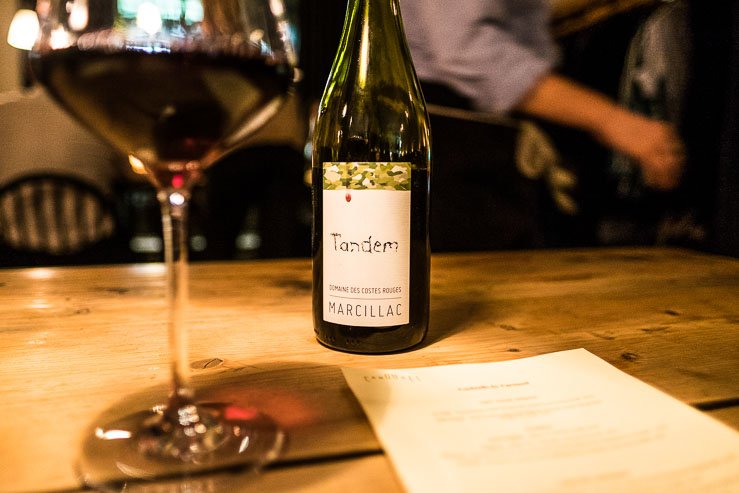 Then came Beef Tartare with Chanterelles and Egg Yolk – one of the best beef tartars ever. 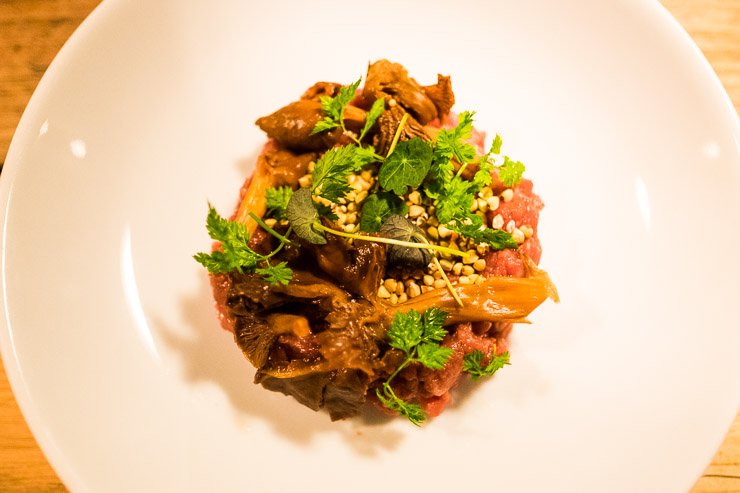 The Bone Marrow & Marmite was followed by Lamb Rump, Hispi Cabbage, a sweeter, pointy shaped cabbage, with Gentleman’s Relish, a a very British condiment, a highly seasoned anchovy paste, and a brilliant reflection of how Ramses had adapted the styles and ingredients to reflect the location of where they were cooking.

By this time, I had had an Indi Goose cocktail (Grey Goose Vodka, Del Maguey Mezcal and Cocchi Americano Bergamot Juice), the gin & tonic, the wine and the Bourbon. I had lost focus on the pictures and started to focus more on the eating …. the photo below was after I’d eaten half the lamb dish. 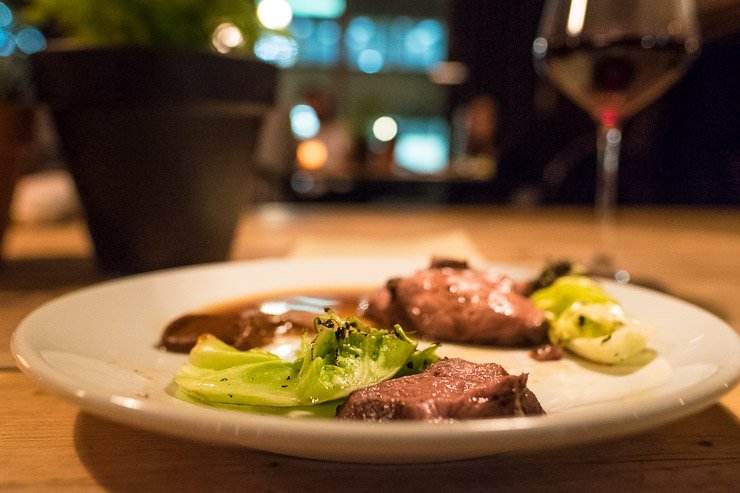 To round up came Chocolate, Cardamon & Olive Oil. I’d never had that chocolate and olive oil combo… a very soothing end to a meal. 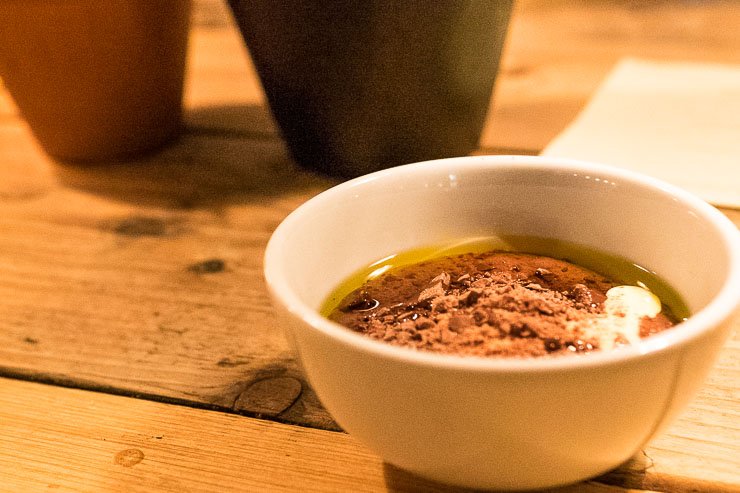 And then a quick journey on the bus back to my suburban part of London… a far cry from the hip streets of Neukölln.

Industry Standard is at Carousel 8-12 November. Otherwise you can find them in Berlin.