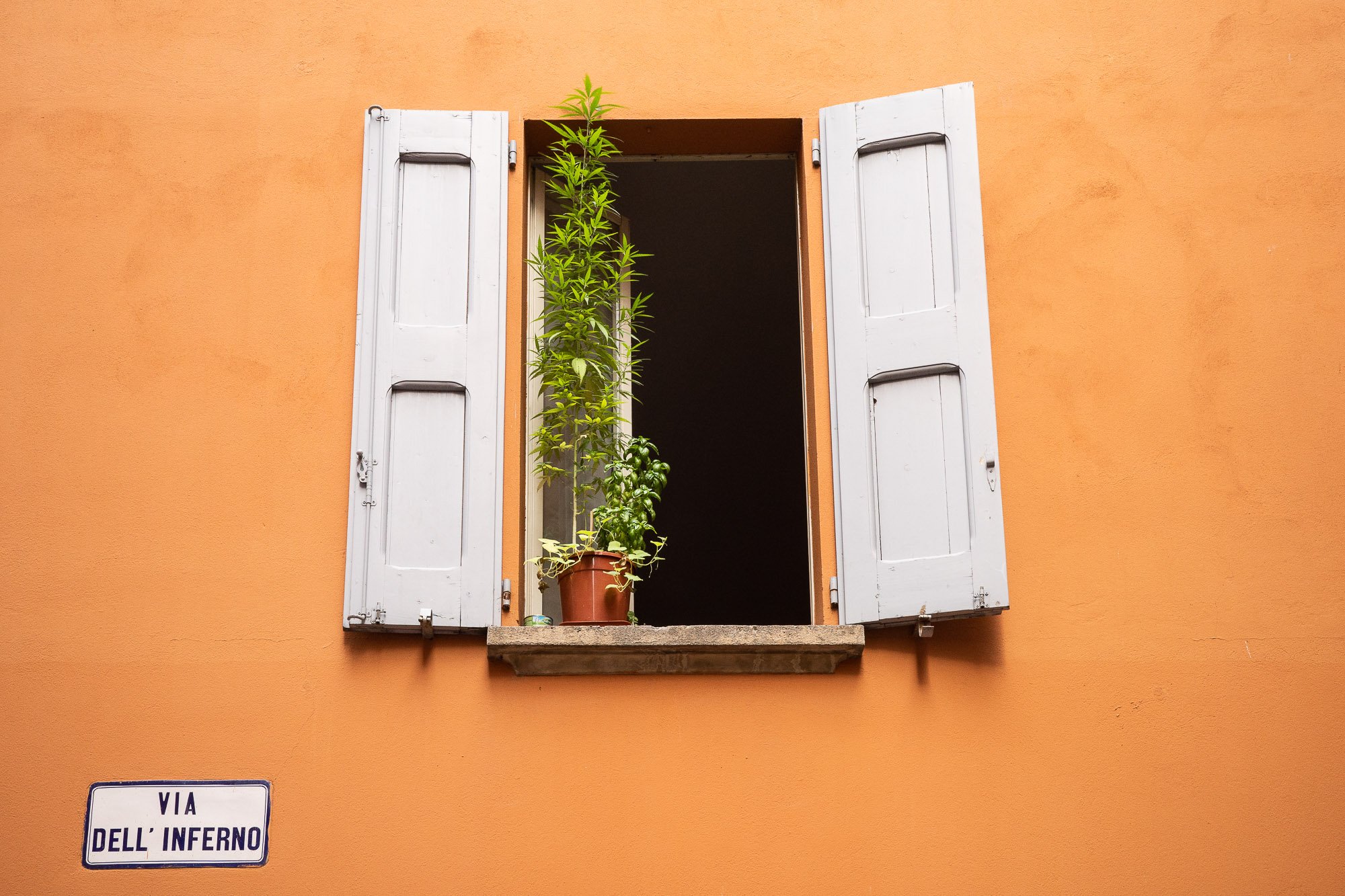 09 Sep I see red in Bologna

The shady arcades, or portici, of the Italian city of Bologna came as a welcome relief, first from the torrid sun and then, when I returned to the city four weeks later, the torrential rain.

I was passing through Bologna on my way to and from Southern Tuscany. To be more exact, to Castell’Azarra, an hour’s drive southwest from Chiusi train station.

Bologna is a small city – just a bit smaller than Florence. The central train station is an eight-minute monorail ride from the airport and an 18-minute walk to my hotel, the three-star Hotel Accademia, on the edge of the university district.

Just like Bordeaux, you can walk the whole town. And, like Bordeaux, the cobbled streets are unfriendly to the wheelie suitcase, especially when, on my return, I was trawling 23 kilos (500 pounds) behind me.

La Rossa, the red one, is one of Bologna’s three nicknames. It refers to the red hue of the buildings, made from local clay. Local politics are traditionally red as well. The other two nicknames for the city are: La Dotta – the learned one… Bologna is home to Europe’s first university; and La Grassa – the fat one… given the fame of its cuisine.

Bologna is capital of the Emilia-Romagna region, famous for its Parmegiano-Reggiano (aka Parmesan), Parma ham and Modena balsamic vinegar.

Food is good in La Grassa. But finding memorable places that focus on local , seasonal produce is surprisingly hard, especially given that Italy is the birthplace of the Slow Food movement,

Instead, the city’s eateries focus on traditional, Bolognese fare – probably because that’s what the tourists want. So lots of mortadella (that bright pink cold sausage with white chunks of fat in it), tagliatelle al ragu (the origin of spaghetti bolognese) and lasagne. This is meat country.

I found my way around the city orienting around two historic locations. The first was Piazza Maggiore. The square is home to the Basilica de San Petroni, where, when I was there, they were holding a festival in honour of Pier Paolo Pasolini. The festival marked the 100th anniversary since the controversial filmmaker, who was murdered mysteriously in 1975, was born in Bologna.

My second point of orientation in Bologna were the two towers, le due torri, of Asinelli and Garisenda, marking the entrance to the city. A five-minute walk east of Piazza Maggiore, along the Via Rizzoli arcaded shopping street, the towers are two of some 20 mediaeval towers that still pierce through the city’s horizon.

One of the world’s top 25 places for ice cream, according to The Financial Times, is Il Gelatauro, founded by Calabrian-born Gianni Figliomeni in 1998. It was closed for the August holidays when I was in Bologna. I was so disappointed that I had no ice cream when I was in Italy.

Coffee is good in Italy, Full stop. I always go for a caffè normale – small and black. My favourite place to frequent in Bologna was Bar Pasticceria Santo Stefano – nothing special, a basic bar on the quiet Santo Stefano street, with well-healed locals scattered among the tourists at the outdoor tables.

Also in Santo Stefano street is Vineria Favalli, which specialises in ‘artisanal’ wines. Rather than a bottle of wine, I bought a jar of olives to take home. as I knew that I was already heading for the 23-kilo limit of my baggage allowance.

For an aperitivo, I went to Enoteca Historico Faccioli, for a glass of local, red Sangiovese produced by Noelia Ricci . It’s a friendly place that also serves lunch on some days of the week. Round the corner is one of my favourite Bolognese fashion stores, Otto B – for men and women.

The city is full of restaurants… pasta, mortadella, and so on, with not that many vegetables. On my first night I ate at Via Con Me, named after the famous 1980s song by singer-songwriter Paolo Conte. Here, I had a glass of Vite In Fiore by Francesconi Paolo, made from the white Albana grape, said to have been grown in the local region for over 2,500 years, at least.

For a classic Bolognese lunch, I went to Caminetto d’Oro, a trattoria in an arcade off the Via dell’Indipendenza, which runs from the PIazza Maggiore to the central train station. Here I had an excellent tagliatelle al ragu, the ground beef sauce that most people mistakingly call Bolognese sauce.

For my last lunch in Bologna I went to Diana. The restaurant, an old stalwart, is considered the ‘temple’ of Bolognese cuisine. It was far less touristy, and more formal, than the popular foodie area around the Tamburini deli, where you buy your mortadella and bread and then take it for a glass of wine at Trattoria del Sole.

The prices were also higher, but then the service was good and the table cloths were white. “Why the name?” I asked. The waiter did not know. Diana was the goddess of the hunter in Roman mythology. And it was here that I hunted dow the local sparkling wine – Pignoletto frizzante dei Colli Bolognesi. And it was well worth the wait.

The same well-heeled woman who I met on the terrace at the Bar Pasticerria Santo Stefano, who told me about Ristorante Diana, also suggested Osteria Bartollini, near the Basilica di San Francesco, where the menu centres on fried and grilled fish, and ice cream.

Oops, I nearly forgot the art scene in Bologne. On my last morning, I dropped into the Pinacoteca Nazionale Bologna. Along with the frescoes, here I caught up on the 16th century Mannerist movement for which Bologna is so famous.

For next time… the student run in Bologna

Next time I am in Bologna I will follow the culinary run of the city’s 85,000 students, to places such as Osteria dell’Orsa, just round the corner from my hotel. The queues were always long, the tourists few and the vibe was energetic.