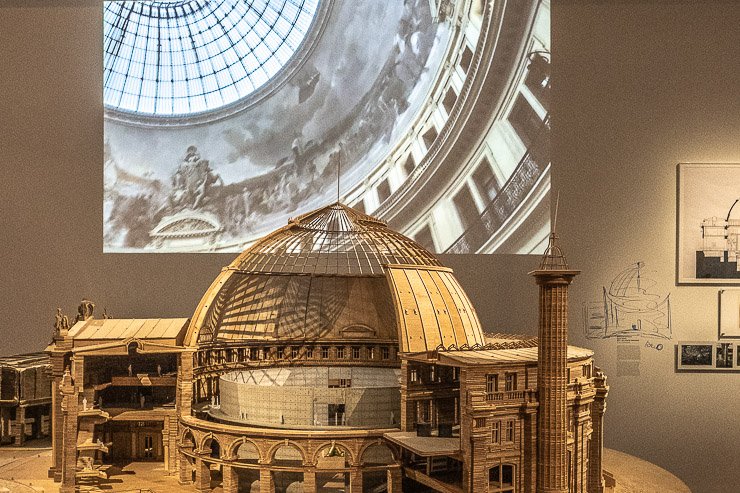 “Beauty is the promise of happiness,” wrote French writer Stendhal in 1822.  I went along to the Bourse de Commerce, in Paris’ 1st arrondissement, this November (2021). I wanted to marvel at the beauty of this historic building – and to find some happiness.

The Bourse de Commerce reopened this May. It has finally been restored and redesigned by Tadao Ando, a self-taught architect from Japan. His most famous works include the Church of Light, just outside Osaka. (I took the main blog image at the 2018 Tadao Ando retrospective at the Pompidou Centre).

What I like about the Bourse de Commerce is its circular form, the grandiosity of its neo-classical style, the huge 19th century wrought-iron dome, and its multi-layered history, which goes back some 400 years. The vast concrete rotunda imagined by Tadao adds just one more layer to this history

A heritage building has come together with contemporary artworks. For me, this creates complementarity, and hence beauty and happiness. (France’s other big luxury group, LVMH, has got their own museum too.)

The three things that most struck me during my visit were old, new and not so new:

The restaurant at the Bourse de Commerce, Les Halle aux Grains, is run by Michel Bras and his son Sébastien, from Aveyron, in the southwest of France. The Bras family is most famous for Le Suquet restaurant & hotel in Laguiole, a town famous for its knives, and near the Norman Foster-deigned Millau viaduct.

On an axis with Les Halles

The Bourse de Commerce is on an axis which runs through a public park, with the Church of Saint-Eustache to the left (and the E Dehillerin cookware shop) to Les Halles shopping centre and then on to the Pompidou Centre.

For coffee & croissant: Bar du Moulin, in the quiet Place des Petits Pères, opposite the Basilica of Notre-Dame-des-Victoires. It has its own bakery next door, Le Moulin de la Vierge. I stopped off here a lot in 2018, on my way to work at Le Grand Palais. Remember to say ‘bonjour’ with a happy face, as you’ll get better service.

For lunch midweek: Fleur de Pavé is a one Michelin star restaurant just off the rue Montmartre where the vegetable-inspired set-lunch menu is well worth it at €45.

For afternoon cakes: slightly further away is La Patisserie du Meurice par Cédric Grolet. It’s worth the walk, especially if you’re heading to the Tuileries Gardens. I had the ‘black lemon’ on the far right. An experience to remember, despite the price. Cédric has also opened a shop at Opèra.

My favourite shops in the neighbourhood

Epices Roellinger, in the quiet street of Sainte-Anne near the Palais-Royal, is founded by three Michelin stars chef and spice hunter Olivier Roellinger, from their family base in Brittany. The world’s finest treasure trove of spices.  They no longer export to the UK, so it’s my go-to spot each time I visit Paris.

La Bouche Rouge in the arcades of the Palais-Royal. The best lipstick ever, and ‘clean’. You can find them as well at nearby La Samaritaine – the department store newly restored by the LVMH group.

Maison Bonnet for bespoke glasses. They operate out of a workshop off the main Palais-Royal. I bought my glasses here over ten years ago, making the trip to Paris especially. I’ve never looked back, and bought another pair since. An investment. They also have a shop in London. The last luxury I’d ever give up.

More to visit next time