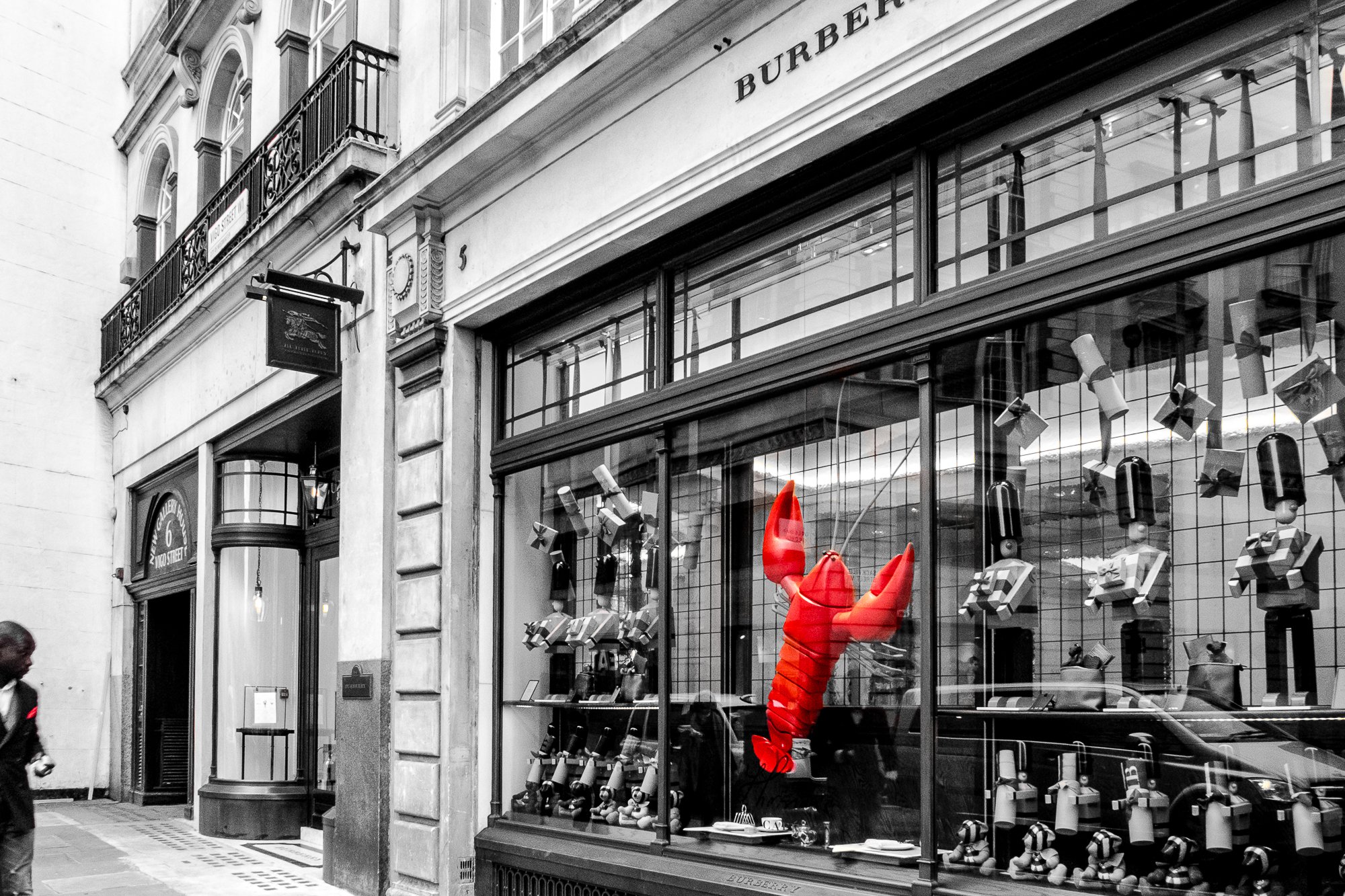 16 Dec Food & fashion: in memory of Thomas’s of Burberry

Christmas is about creating light amid the winter darkness. It’s about slowing down, slowing right down, until you start to feel – an experience that can be joyous, painful, or both.

At the start of the festive season in 2015, my ‘light’ came in the form of a lobster lunch at Thomas’s of Burberry, just off Regent Street. The restaurant, on the ground floor of Burberry’s flagship store, was reached by a ‘secret’ entrance from Vigo Street.

I say ‘was’ as the restaurant has since closed. Burberry is swinging to a new tune: more towards the digital and the ‘social’. Meanwhile, my ‘joyous’ memories of the lobster lunch linger on.

So why the link between food and fashion? Both are about the senses, the spectacle, the story-telling. They’re also about the experience of feeling; and to feel you need to slow down … slow food, slow fashion.

Food is about feeling inwards and fashion outwards, but then the ‘in’ is always linked to the ‘out’, in the same way that ‘light’ never comes without ‘dark’.

Both food and fashion can take you to another level of consciousness, even if it’s about no more than the well-balanced acidity of a wine or the touch of a fabric … No need for incense, chanting or a mung-bean diet.

Slow food, slow fashion ­is when durability replaces disposability. Both are about the spectator becoming the participant, as well as about:

Often I eat out in the search of slowing down – whether on my own or with friends – to create a deeper connection.

That winter lunchtime five years ago, I was on my own at Thomas’s – apart from the friendly waiting staff.

Even the menu, emblazoned with the golden swirl of the signature of Thomas Burberry, the founder of one of Britain’s most famous names in luxury, read like a book of fairy tales, full of heroic figures and beautiful etchings.

The space was as quintessentially British as a Burberry trench coat made in Yorkshire – even though the brand was founded in the less romantic town of Basingstoke.

The inspiration was Victoriana: marble flooring with geometric patterns; colours inspired by purple damsons, the hues of walnuts and the pale golds of wheat fields; and wooden cabinets full of curiosities – British-made crafts for sale.

Echoing from the next door room were the reassuring sounds of the cutting of ribbon and the crinkling of paper, as Christmas gifts were wrapped.

The sounds chimed with the clinking of wine glasses and the background music from Burberry Acoustics, in celebration of British musicians.

The menu read like a road trip across Britain: produce gathered from coast and countryside.  I ordered British lobster with chips made from Cornish potatoes. I also had my eye on the Scottish girolles.

Even Thomas’s bubbly was from British vineyards – a Nyetimber Classic Cuvée. You could also imbibe a pre-lunch Thomas’s Gin & Tonic by the fireside, itself crowned by a large, gilt-edged mirror set above the festively decorated mantelpiece.

Of the time: Mrs Beeton & Alice in Wonderland

Burberry was founded in 1856. Four years later, Isabella Beeton published Mrs Beeton’s Book of Household Management, a staple in many a Victorian home.

Like Thomas’s, Mrs Beeton was an advocate of eating local and seasonally.  She also saw cooking as an art, requiring skill and ingenuity.

About lobster, Mrs Beeton wrote that they are “palatable” and “enjoyable” and can be “eaten with impunity by the majority”. Recipes include lobster salad, potted lobster and lobster soup.

Then, shortly after, in the tailwind of the time known as the ‘golden age’ of the Victorian era, came the release by Lewis Carroll of Alice’s Adventures in Wonderland: all about rabbit holes, fantasy worlds and tea parties.

In one chapter, Alice learns of a dance called the Lobster-Quadrille, with one of the steps made up of throwing the “lobster as far as you can out to sea”!

Burberry runs deep in my family history. My grandfather writes about his Burberry trench coat in his diaries, as he and his men prepared for the Battle of Ypres in the First World War.

And my fashion designer mother bequeathed me her 1950s Burberry trench coat, which went on to save me from the severe cold as I slept under the stars in the Sahara desert in Niger.

I could have done with some British lobster on that trip – and a glass of Nyetimber.

All pictures taken in November 2015.

As you wait for restaurants to reopen across Europe, discover some of my ‘Conscious How To’s’ – a look at life with a more conscious gaze.