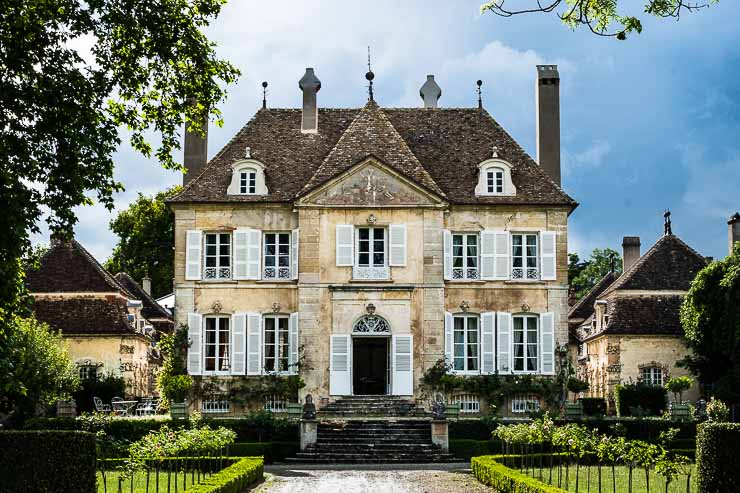 I’m a descendent of the Dukes of Burgundy according to my aunt, née Cynthia Power. True or not true, I’m happy with this tale. Burgundy has a majestic style unique to the region. Domaine Chandon de Briailles, for example, sells its wine from the estate’s 18th century chapel.

Many Burgundian vineyards have monastic origins. The monks had the cellars and the store rooms, and the organisation and the time needed to experiment, record and compare wine-making methods, vintages and terroirs. They have also left a legacy of medieval style, colour and flourish. 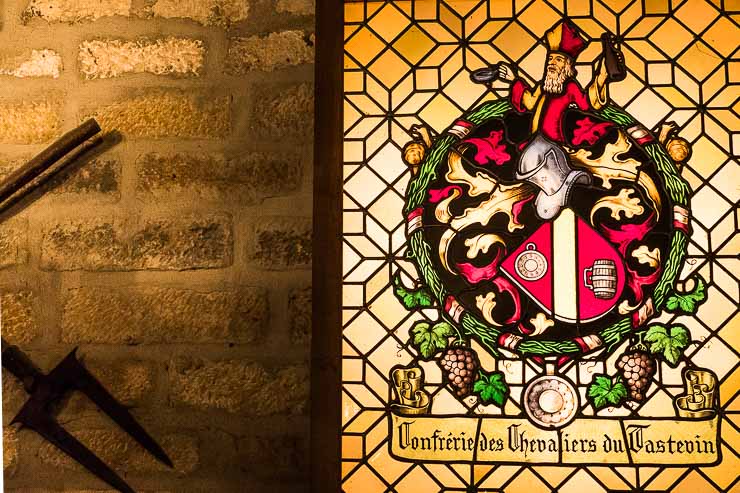 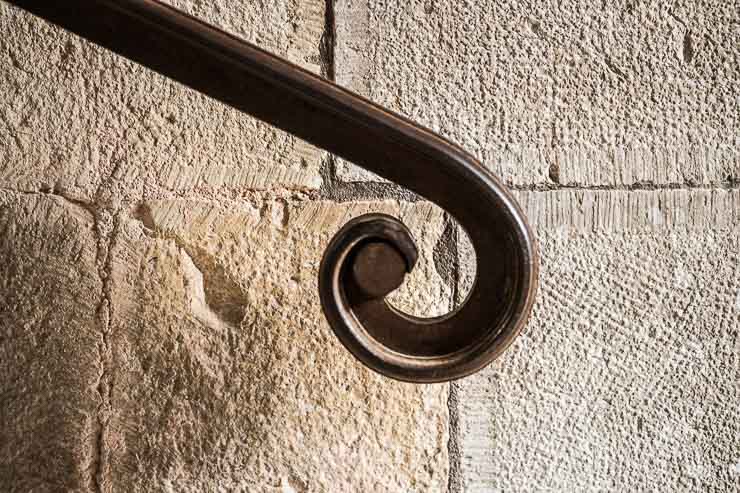 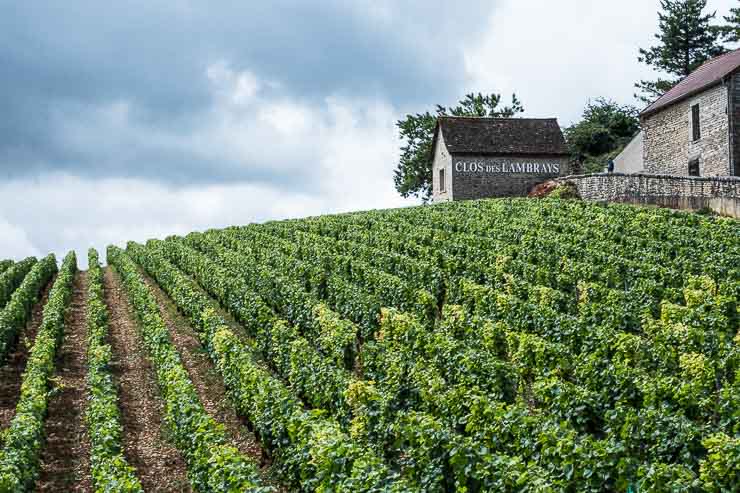 A vineyard in Burgundy

Nearly 200 years later, the estate, in the village of Savigny-lès-Beaune, is still in the same family’s hands, and is now run by sister and brother Claude and François de Nicolay.

The domaine has nearly 14 hectares of vineyards in Savigny-lès Beaune, Pernand-Vergelesses and Aloxe-Corton. They became biodynamic in 2008, in one fell swoop – a brave step to take. Their wines are now appreciated around the world: from Daniel Boulud in New York to Le Bristol in Paris.

This is wine “as close as possible to its origin”, an expression of climate and soil.  Horses and rakes are used instead of tractors, there’s no filtering or fining, and the wine is then aged in the 14th century cellar, first built by monks, of course.

When we were there, the atmosphere was familial, as one says in French, including the family labrador wandering around, lying down to sleep now and again among the bottles.

Biodynamic methods of production may not bring riches, given the labour intensity of the work, but if that is what your heart tells you to do there’s no other way.<br\>

From chapel to Burgundy wine shop

From the domaine’s wine shop in the converted chapel – still resplendent with old masters – I bought a Pernand-Vergelesses 1er Cru Les Vergelesses 2011 for €42. My excuse was that it was a present for my son for watering the plants while I was away; to share with me of course!

This cuvée comes from a vineyard of just 1.2 hectares planted in 1954. The tasting notes state: “This wine is of intense colour, a wine that is rich, full and not very tannic. It rapidly develops aromas of fresh fruit before revealing a lightly spicy character for immediate pleasure.” 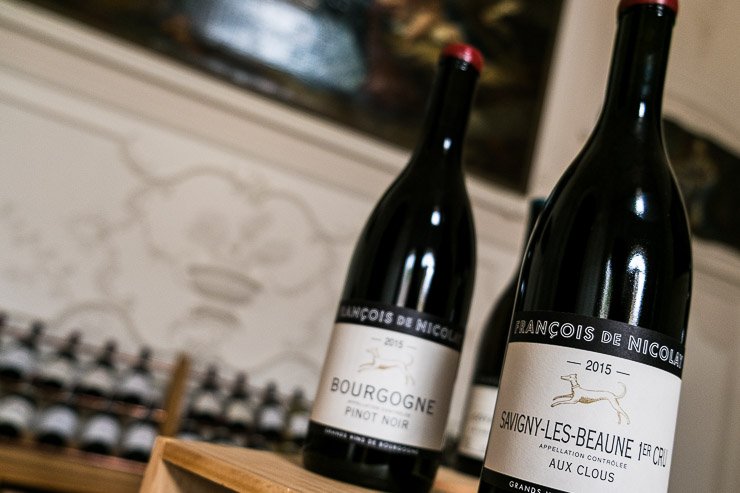 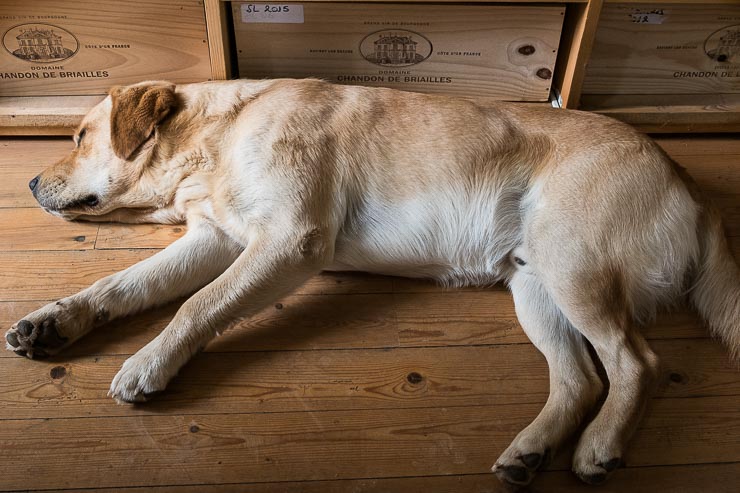 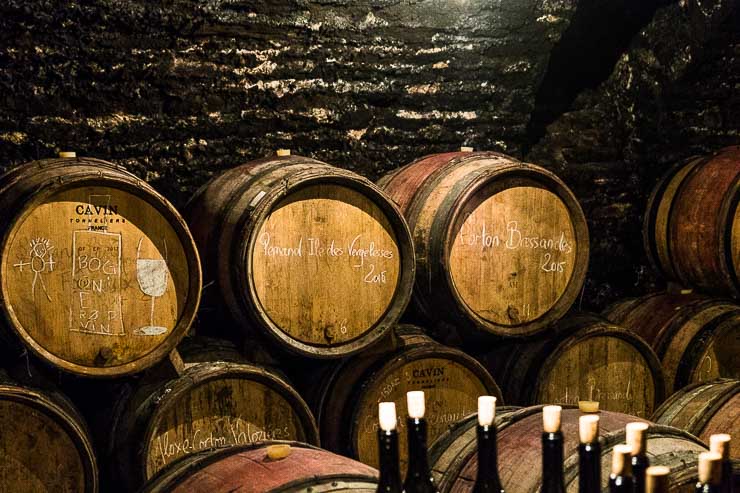 Shopping done, we visited the 18th century garden, designed in the style of André Le Nôtre, the name behind the park of the Palace of Versailles.

It was the golden hour, that ‘golden’ time before the sun sets. The feeling of history and of past energies and moments shone through in the otherwise deserted garden.

Lines and perspectives abounded, as well as box hedging, lichen-covered statues of Greek gods, rose bushes, fruit trees, water, stone walls and some of France’s oldest plane trees. There was a chambre de verdure, an ‘intimate’ green room, near the grotto at the end. I had no one to be intimate with, and, in any case, I was working.

Earlier on, we had had a different stylish experience: lunch at La Maison, the Table and Chambres d’Hôte of Domaine Trapet, in Gevrey-Chambertin, in the neighbouring Côte de Nuits wine region.

The Trapet family have vineyards and produce biodynamic wines in Alsace as well as Burgundy, but Burgundy is where their heart lies.

En route to La Maison, the heavens opened and the rain poured down. We took shelter in the La Rotîsserie du Chambertin, whose renowned restaurant supplies food to La Maison next door, in the rue du Chêne, the road of the oak tree.

La Maison is reservations only. From the outside you would never know there was a restaurant. It was like coming home, with a warm welcome from members of the Trapet family themselves.

The house was artfully decorated: plenty of rustic wood, an original open fireplace, renaissance colours and flourishes of modernity – a mix of styles in a way that only the French can do.

La Maison is a passion project, to showcase the wines of Domaine Trapet and to pair them with the very best local produce and dishes, all in a very stylish, warm environment. 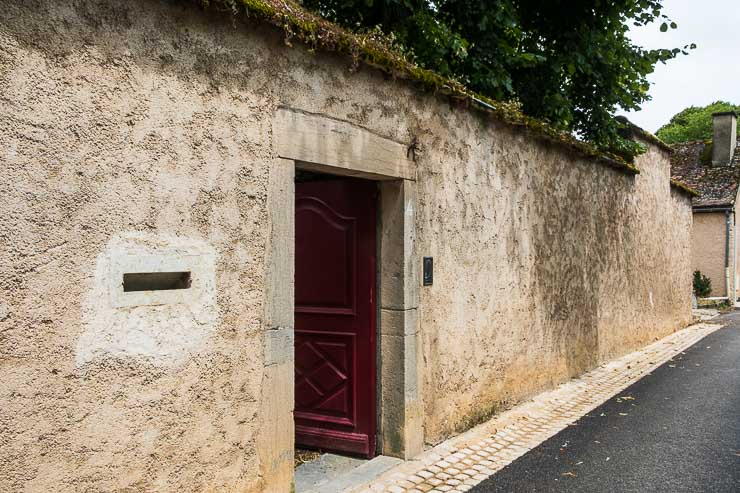 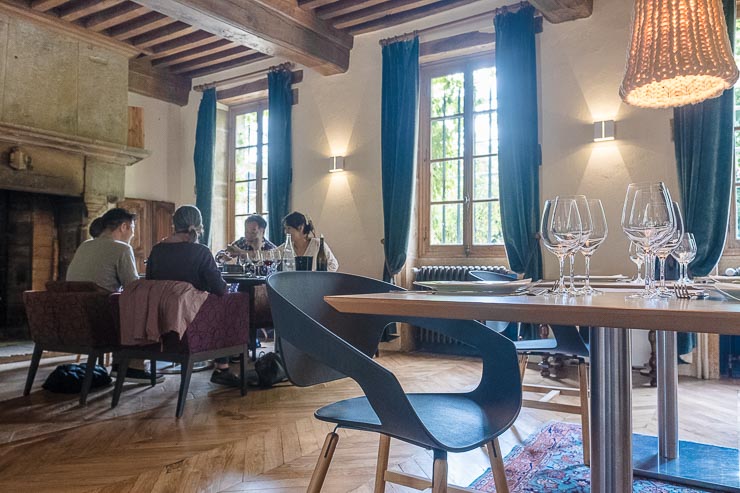 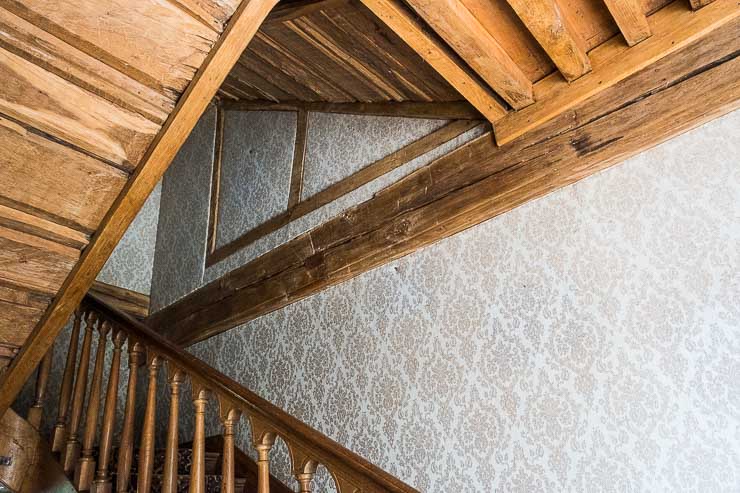 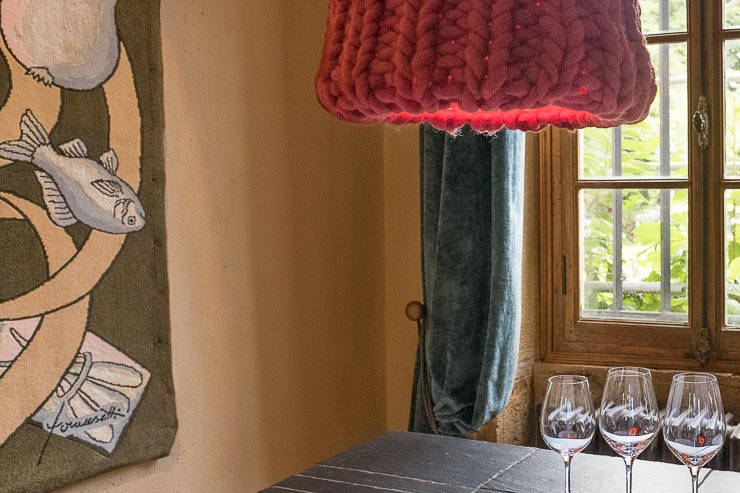 What we had for lunch at La Maison

We chose the ‘hot’ menu – comme un dimanche (like on a Sunday). There’s also a cold menu, comme dans les vignes (like in the vineyards). For €35 and an additional €45 for the wine pairing of four different Domaine Trapet wines. (We upgraded our Chambertin to a Grand Cru.)

The Domaine Trapet is on the other side of Gevry-Chambertin from La Maison.

The domaine is biodynamic, in production and in philosophy. Artworks representing the four elements of earth, wind, fire and water are placed in visually strategic points in the vaulted cellar.  It’s the combination of all four elements that produces a good wine and determines how that wine will taste, says Jean-Louis Trapet.

It was also the week before the Tour de France was due to pass through the town. I could not resist taking a photo of the bike-themed artwork installed outside the domaine.

See my other posts about Burgundy::

From the Vineyards of Burgundy to the Olympics of Rio (May 2016, updated August 2017)

And to meet an up-and-coming producer: