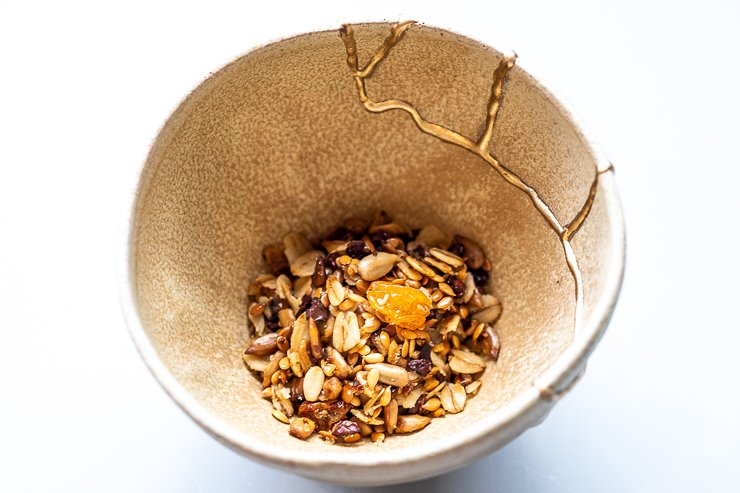 My introduction to Carters of Moseley in the southern outskirts of Birmingham came via an Instagram ‘friend’, Microcosmos, an urban winery in Marseille. I love social media. It creates a parallel cyber world that amplifies our (I focus on keeping to the good) experiences in the real world.

Arriving on the No 50 bus from Birmingham city centre, I got off at the stop for the suburb of Moseley. Carters of Moseley is then a short walk up the hill, past the medieval church of St Mary’s.

I was half expecting the restaurant to be a palatial Victorian building surrounded by gardens, given its posh-sounding name. Instead Carters of Moseley is in a mock-Tudor parade of shops, with a chemist’s on one side and a solicitor’s on the other, and LA-style parking out front.

It takes about 20 minutes to get to Moseley by bus if the traffic is flowing. The No 50 leaves from just outside the iconic Selfridges Building, at the Moor Street Station entrance. I would recommend Birmingham to any visitor… to discover the true England, rather than just a visit to London. For starters, Birmingham has more canals than Venice.

The story of Carters of Moseley

Carters of Moseley is a ‘British restaurant in Birmingham‘ – the UK’s second city. The menu reflects ‘British terroir‘ … ‘in the moment‘. It’s also about smoking, dry curing, fermenting, preserving and ageing – a unique world of experimentation.

The restaurant was opened in 2010 by chef Brad Carter and Holly Jackson, who looks after the front of house. Brad’s not into stars. When the Michelin Guide rang him up with news of his first star, he didn’t even know what it meant, he told me. He is a chef who has made the great leap into the limelight by following his gut instinct and developing his own style.

Brad tracks down the best produce… making the most of Birmingham’s position in the middle of England, and close to Wales. Much of the fruit and vegetables comes from nearby allotments.

The most difficult produce to source, he said, was the different types of wood, from oak to apple, used in the charcoal oven. He eventually tracked down a supplier in the Forest of Dean.

Being a Southerner and a Londoner, I just loved his Brummie (Birmingham) accent. Linguistics say a monotone accent with a downward inflection. 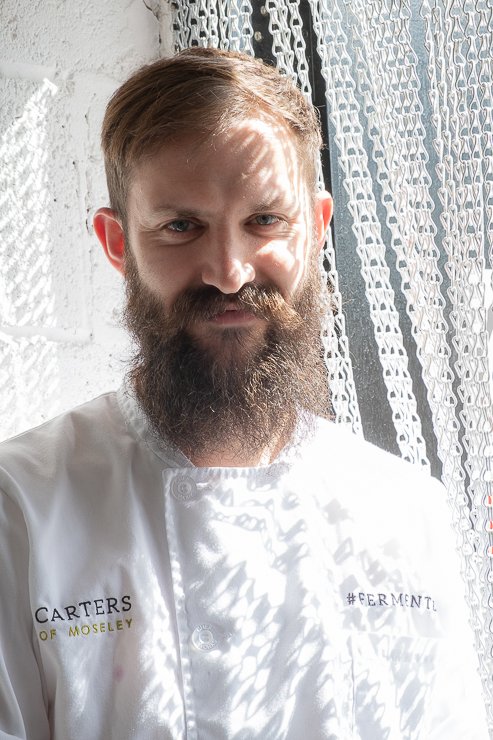 What I ate at Carters of Moseley

Porthilly Oyster (from the Camel Estuary in Cornwall) Cooked in Beef Fat (aged for 3-4 weeks) – The oyster was done up like a Christmas present. You untie the bow, lift the lid and peep inside – oh, such joy!

House Charcuturie – Tamworth pig coppa (from the neck & shoulder) cured for 4-6 weeks (resulting in 30% moisture loss) and then washed in white wine and pepper. The Tamworth pig is the only indigenous pig to the UK suited to being outdoors all year round. It produces excellent pork and cured meats. Brad makes his charcuterie out the back of the restaurant.

Raw Kohlrabi, Pine, Salad Burnet – Kohlrabi, one of England’s most underused vegetables, is a cultivar of wild cabbage. At Carters of Moseley it is compressed in pine oil and pine vinegar, and then served with salad burnet, a low-growing herb whose leaves are famed for smelling of cucumber.

A white Burgundy by Julien Altaber

The suggestion of the house was a glass of Sextant Bourgogne Chardonnay 2015 by Julien Altaber. This was perfect for a summer’s day, with temperatures of about 26°C outside… a few degrees colder than London… I was so glad I had taken my woollen scarf! There is wine pairing available, but one glass was enough … if I were to take photos and see the rest of Birmingham.

This wine for me is drinking proof that biodynamic wines, produced with minimum human intervention and maximum natural character, when well done, are the very best. They have style, personality (from the terroir) and class, and neither do they have to cost the earth.

Many of the ceramics are handmade by Jo’s Pots in St Ives.

As in the featured image of the Chicken Liver Cereal dish, and in the image below of the Evesham Tomatoes, Smoked Curd & Back Fat,  Jo uses the ancient Japanese technique of kintsugi, when broken pottery is repaired using lacquer dusted or mixed with gold. It’s about embracing the cracks, the imperfections… rather than throwing out the dishes.

The sourdough bread, which arrives in a little pouch, is made from flour from the 250-year-old Sarehole Mill, five minutes down the road. JR Tolkein lived 300 yards from the mill between the ages of four and eight. He described it as a “lost paradise”, and it became a source of inspiration for The Lord of the Rings.

To go with the sourdough bread was homemade cultured butter and ‘pig’ butter, made out of rendered pork back fat, salt and caramelised onions.

I love this… when a dish arrives, by surprise, and is not on the menu. Ceramics once again especially chosen.

Smoked Exmoor Caviar, Raw Orkney Scallops – with cream grilled on hot charcoals. Yes, the UK has its own caviar, farmed on Exmoor.

On with the menu …

Evesham Tomatoes, Smoked Curd, Back Fat –  the curd is smoked curd over apple wood and the sliced back fat is from Mangalica pig, whose ‘meat’ is up to 70% fat. The Mangelette pig wa from Austria. Yes, Carters of Moseley is about local, but the restaurant is not dogmatic about this… there’s leeway when the quality is right elsewhere.

Blonde Ray, Potato, Sea Truffle – blonde ray is a sustainable type of skate fished off the Cornish coastline, then baked in salt. The ingredients in the sauce include sea truffle, or pepper dulse, a native seaweed; Red King Edward potatoes, said to have the strongest potato taste among  potatoes; and egg white.

Cornish Lamb, English Peas, Sea Lettuce –The lamb, with a cut called ‘best end’, is smoked on hot charcoals, with seaweed powder and black garlic powder.I could have paid £10 extra to add Manjimup truffle from south of Perth, in Australia, where truffles are available from June to August, before the start of the season in Europe. The best lamb ever.

Grilled Strawberry, Green Strawberry, Cultured Cream – green strawberries have all the strawberry taste without the sweetness.

Fig leaf, Lichfield Raspberries, Fermented Rice – the eggless ice cream is made out of white rice and koji, an edible, domesticated fungi that converts starch to sugar. Koji is generally used in Japan to make soy sauce, miso and sake.

Another surprise… Single Estate Chocolate Grenache, Droitwich Salt, Shropshire Rapeseed Oil. The salt comes from the Churchfield Saltworks in the nearby Worcestershire town of Droitwich. The spa town is famed for its ancient brine springs. The Anglo-Saxons were among the first to source the salt at Droitwich.

The bar & the pantry

The area out the back is seething with activity. The likes of fermented rock samphire, pickled gooseberries and green pine cone jam fill the rows of jars

There’s a story behind that #fermentz hashtag on the chefs’ jackets. I seem to remember that it was Brad who came up with the idea. The rest is legend, with the added ‘z’ resonating the fizzing that foods do when they ferment.

Vegetarian at Carters of Moseley

All menus are set… there is no à la carte. I prefer eating like this, and then I say what I don’t eat when I book. The menus are:

Nearly four hours later, I sauntered out of the restaurant feeling mentally, physically and spiritually elated.

Next was on to the Secret Garden at the Library of Birmingham, then Ikon Gallery – one of the UK’s leading contemporary art galleries, and a quick stopover before catching the train to London at Tilt, renowned for its craft beer, coffee and pinball.

I’ll be back at Carters of Moseley – to catch a different season, with a different menu. Here, food is like fashion – seasonal, and ever-evolving.