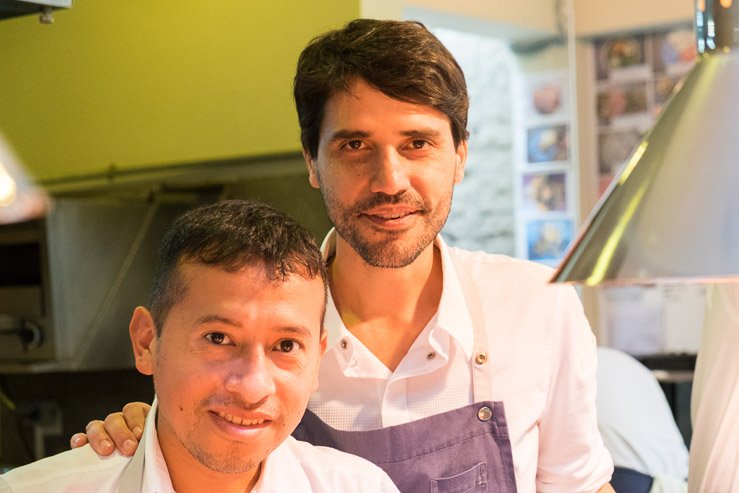 06 Nov In heaven: the tasting menu at Central in Lima

I flew across an ocean and a continent to eat at Central, one of the world’s top 4 restaurants. And the experience was worth every single penny and every single minute of my journey.

The restaurant’s world-famous chef Virgilio Martínez (right in the featured picture) takes diners on a gastronomic tour of the diverse ecosystems of his home country Peru, from Pacific coastal shores to the high Andes and the depths of the Amazon jungle.

For those interested, the other top 3 restaurants in the world are Osteria Francescana in Italy, El Celler de Can Roca in Spain and Eleven Madison Park in New York. Where’s France?

Central’s Alturas Mater Tasting Menu is made up of 16 courses. The produce is grown, foraged or raised from altitudes starting at 20 metres below sea level and rising to 4,100 metres, so that’s up to 13,500 feet. Like the Incas, Virgilio perceives land on a vertical rather than a horizontal plane.

I was so overwhelmed by the experience that, once the last course was finished and a few final chats ended, I took a taxi back to where I was staying, retreated to my bed, at 4.30 in the afternoon, and did not surface again till 8 the next morning. I needed to ‘integrate’ the experience, as my kundalini yoga teacher would say.

Central occupies a modern building in a quiet street in the Miraflores district of Lima, a few minutes’ walk from the seafront. It even has its own rooftop garden for herbs and spices.

It is from here that Virgilio leads the Mater Iniciativa, with a team of researchers travelling around Peru collecting from the country’s ecosystems, among the most diverse in the world. “The actions of Mater influence the soul of Central,” I read. This is an initiative that is not just culinary but also anthropological.

The passion at Central – and it breathes passion – is not just about the food and the produce; it’s also about getting every detail right … the service, the colours, the design, the stories, the music, the note of fun. Even the water is not left to chance: it is bottled on-site, filtered, ozonated and purified using reverse oxmosis.

What’s more, Virgilio himself was at the restaurant that day. He came to greet me at my table, I turned into a blithering mess, hardly able to talk Spanish. His looks reminded me of Mexican actor Gael García Bernal, which made me even more weak at the knees. Never have I met a chef so approachable, so open… and with such a full agenda.

Central acts as a place of pilgrimage for other chefs from around the world to come and see what the buzz is about. That day was the turn of Zaiyu Hasegawa of Tokyo’s Den restaurant, which won the One To Watch Award 2016 organised by the World’s 50 Best Restaurants.

Zaiyu is famed not only for the quality of his cuisine but also for putting “the fun into fine dining”. Below are the two from Den having a lot of fun at Central.

Now for what I ate…

The Alturas Master menu was priced at S/398 or £94/US$118. Originally I got the Peruvian sole sign muddled with the US dollar sign, and wondered whether I was mad for paying that amount – it turned out I was only mad because I confused the two signs.

I started with a Pisco Italia cocktail, with basil and tumbo, otherwise known as banana passion fruit.

Then came, each course with its own title and story … a word of warning: you don’t eat everything you see in the pictures.

River Cotton… with pacay (from the Inga feuillei or ice-cream bean tree), shrimp, nut, huito (or Genipa americana, a type of fruit from the rainforest) … all produce from 140 metres in altitude (BELOW).

Jungle Scales… river snails, gamitana (freshwater fish), turmeric, sangre de arból (a red latex from the bark of a type of tree and which is often used for medicinal purposes) 230M

Here I must say something about coca. We in Europe are funny about coca leaves. I could not bring any back to the UK, and neither can you to the US, even though coffee has more of an effect on me than coca leaves.

In my bid to fight off altitude sickness, I had chewed lots as I climbed Mount Salkantay, in the Andes. In the hotel, I had coca leaf tea in the morning. At Central, the coca bread lay on a bed of coca leaves. And, no, I did not put them in a bag and take them home.

Tree Skins… avocado, huacatay (Tagetes minuta in Latin, and sometimes called Peruvian black mint), kiwicha (otherwise known as Love-Lies-Bleeding and seen in gardens in the UK, and an ancient superfood in Peru), macre (a type of squash) 2,300M

Colors of Amazonia… paiche (type of Amazonian fish), sachapapa (a type of yam), pijuayo and ungurahui (both types of palm trees) 450M

Here I switched from my cocktail to a glass of Quebrada de Ihaunco. This is a red wine made from the Quebrada grape, brought over by the Spaniards and now hardly heard of in Europe. In Peru it is used to make pisco.

It went perfectly with the food. Usually I find in the more equatorial countries of Latin America that it is hard to find a wine that matches the vibrant tastes of the region.

Now I was offered a glass of Chirimoya (custard apple) and Maize. It tasted divine, and perfect for the food, but by this time I had stopped asking questions… I just enjoyed.

And then came some European wine… a dessert Riesling. Perfect.

Medicinals & Plant Dyes… congona (I never found out what that was), matico (spiked pepper), malva (mallow), pilipili (a pepper) 3,050M

A book could be written about these ingredients – and it has, a beautiful book, published by Central, focussing on 9 plants from Peru, with their seeds and leaves embossed into the page. A handmade book. A book to keep for life.