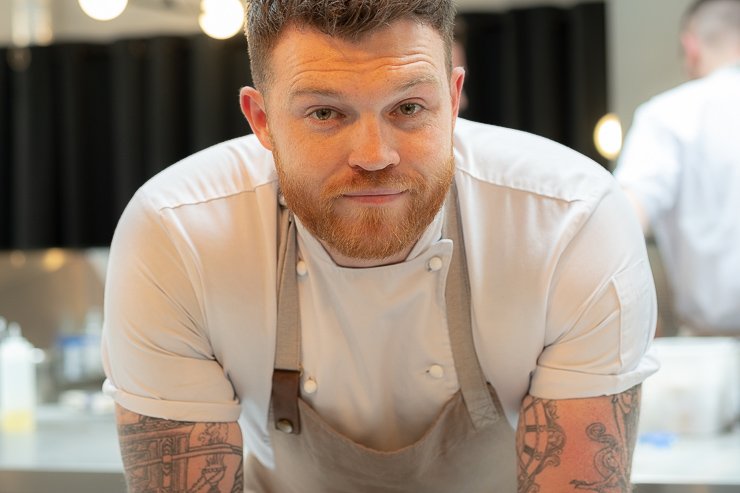 Before boarding the train to Hackney Wick for lunch at Cornerstone – the new restaurant of Tom Brown – I’d been reading Finding True Magic by Seattle-based, Buddhist-inspired Jack Elias.

The book talks about living with passion and curiosity; free from the chattering ‘egoic mind’ with its “fragmented, biased way of perceiving and thinking”.

Cornerstone opened yesterday, round the corner from Hackney Wick train station, and near the Queen Elizabeth Olympic Park. I was there for the restaurant’s first lunch on the first day – a more impressive moment in history for me than the birth of the royal baby the day before.

My ‘egoic mind’ had very nearly stopped me from going, as the restaurant is named after a song by the Arctic Monkeys. “How can I like a restaurant when I don’t like the music?” I asked myself.

I put my judgments to one side and booked my place at the bar. It was part of my practise of being open and joyful, every moment of my life, as in Finding True Magic, a text book for budding hypnotherapists – not that I’m one.

The Arctic Monkeys are from Yorkshire. It was two young Yorkshiremen who were the first diners to walk through the doors of Cornerstone that day. One lived in London and the other was a chef from Leyburn, near the Yorkshire Dales.

I am proud to say that I was the first person to use the soap in the bathroom; nettle and sage soap from Soap Co, a local East End brand. I had to pump extra hard for the first drops.  Cornerstone thinks locally. The restaurant’s minimalist interiors are designed by another local name, architects Holland Harvey.

Beckoned through from the lounge area, I took my seat at the bar, overlooking the open kitchen in the centre of the room. The skylights let in a flood of natural light. That made me happy. While looking at the menu, I found myself liking a song. I Shazamed it: When the Sun Goes Down by the Arctic Monkeys. My life was beginning to open up!

Cornerstone is the first go-it-alone restaurant of Tom Brown. Previously he worked with Nathan Outlaw, whose culinary empire includes Nathan’s eponymous 2-Michelin starred restaurant in Port Isaac, on the north coast of Cornwall, nearly five hours from London. Most recently, Tom was head chef at Outlaws at The Capital in London, which won a Michelin star in 2016.

For those of you who don’t know Cornwall, this county on the south-west tip of England is known for the Cornish language, Celtic roots, cold-water surfing, beautiful coastline and for the warmest weather in Britain. It is also famed for its afternoon teas of scones with clotted cream & jam, with the jam first and then the cream, unlike the neighbouring county of Devon where they do it the other way round.

Tom is born and bred in Cornwall. His tattoos are inspired by Roman and Greek mythology. He’s also a chilled, nice guy. The whole experience that day at Cornerstone made me want to move to Cornwall… despite having spent all my (very boring) childhood holidays at my aunt’s house on the Roseland Peninsula.

Let it be known that Cornerstone is a British rather than Cornish restaurant. However, a lot of the produce comes from Cornwall, in particular the fish. Produce is king here, and menus are flexible accordingly. White sprouting broccoli was on the menu for opening day, done with breadcrumbs, egg and lemon. That’s because it was in its prime at that time, that day, that moment. Tom works very closely with his producers… that is the secret of a good restaurant in 2018. 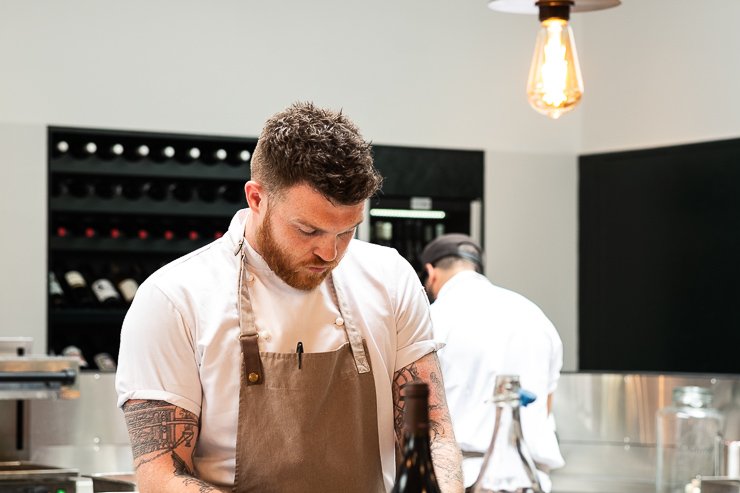 I’m a wine lover. I spotted Fanny Sabre on the wine list at Cornerstone. Next come the judgments. Work still needs to be done on my egoic mind.

I judge a restaurant’s wine list by whether I’ve taken photographs of any of the producers listed. If I have, so my judgment goes – like in the case of Cornerstone – then I know the wine list is good; and that it favours wines produced with maximum passion and craftsmanship, and minimum chemical intervention. That’s thanks to my trips with Clos Driver Wine Tours, who I know and trust.

In all, Cornerstone lists 33 wines, with around half available by the glass.

The new me, looking to be open to every moment without judgment and prejudice, meant I started with a Cornerstone gin and tonic… distilled in Cornwall with apple, sea herbs and herbal tonic.  This was THE best. I’m a convert… only to Cornerstone G&T, but then that is a judgment, so I mustn’t say that. Bar Agrikultur in Stockholm, who will be at the Wilderness Festival, comes second.

For two people, the best option is the £35 menu (each) of nine sharing dishes.

I was one person. Friends and blog posts don’t go together… I need to focus on everything but them.

My preference was for fish, even though there were three meat courses on the menu.  I went for…

Pickled Oyster (pickled in gherkin brine) with Celery, Horseradish and Dill… so creamy and tasty.

Roast Monkfish with Spiced Aubergine Purée, and Basil & Ginger … all the fish is caught from Cornish day boats (boats which go out for the day rather than fishing far from the shore). The time between boat to plate is within 48 hours.

The monkfish is rubbed with the North African ras el hanout spice mix, a blend of around 12 different spices, adding warmth and depth. The same spice is in the aubergine purée, together with harissa hot chilli paste and nutmeg.

I once heard a story that the Berbers of North Africa during the Middle Ages sailed to Cornwall to trade and take slaves… but maybe that’s hersay.

Rhubarb Crumble with Ginger Bread & Clotted Cream … sprinkled with lime zest, minimum sugar (makes me feel so much better) and some apple.

In front of me at the bar was a huge plate of empty oyster shells – awaiting for the actual oysters to come out of their pickling process in gherkin brine. The oysters served that day were Porthilly Oysters. This is a Pacific, or rock oyster, available all year round and introduced to Britain in the last century.

Native British oysters are dredged only with the months of ‘r’ in their name, so the season has just ended … and starts again in September. This is to let the oysters spawn in peace and to multiply. You can tell a native oyster, Tom told me, as the shell is smoother and rounder.

Oysters used to be big in London, hence the Pearly Kings and Queens, a tradition started in the 19th-century Victorian era. Billingsgate sold 500 million oysters in the year of 1851. It was a food eaten by all, rich and poor alike.

Cornerstone, in Prince Edward Road, is a few minutes’ walk from Hackney Wick Overground station. It’s on the line that goes from Richmond or Clapham in the west and south of London, up through west London, across north London and ends one stop after Hackney Wick at Stratford.

My tip is not to be judgmental about how to get there… live for the moment, book your table and then find out how best to arrive.  This is the new ‘in’ part of London … the artists moved here a while ago; now the developers are setting up shop and the kombucha cafés multiplying.

My plan yesterday was also to visit Jarr Kombucha round the corner – my favourite kombucha – and then to have a stroll in the Olympic Park. I’ll do that another time. My lagom mode is still with me from Stockholm, and eating at Cornerstone was just right in terms of excitement, pleasure and novelty… not too much, and no need for more.

I’ll be back… with my son, who, being half Galician, loves oysters and seafood. Maybe the Arctic Monkeys will pay a visit as well?

Cornerstone is open for lunch and dinner Tuesdays till Saturdays.