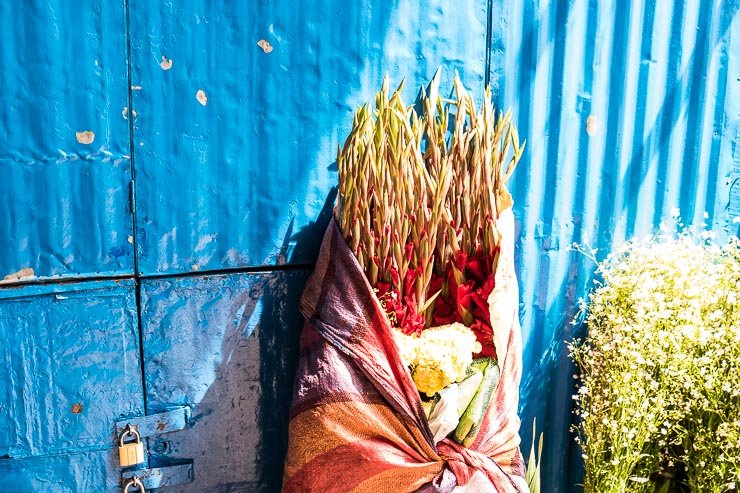 31 Oct Falling under the spell of Cusco

The Peruvian city of Cusco is magical. Set at an altitude of 3,400 metres, it is the ancient capital of the mighty Incan Empire that once stretched from Quito to Santiago de Chile. The local people say Cusco is protected by the mountain spirits, or apus. It is hard not to believe them.

The Empire fell when the Spanish conquistadores invaded the city in the 1530s. They stripped it of its gold and silver (the only materials to rival the stars), raised it (almost) to the ground, and beat its 150,000 citizens into submission. “They did not succeed in killing us off,” said one local Indian to me.

I spent 2 nights in Cusco on my way to walk the Salkantay Trail in the Andes. It’s a city easy to get around on foot, even though the high altitude can make you breathless.

The city has a certain stillness, a living on-the-edge feel, that I associate with areas prone to earthquakes or volcanic eruptions. In 1950, more than half the city’s buildings were destroyed in an earthquake. The last big one was in 1986.

The Incas ruled for only 150 of the 10,000 years or so of civilization recorded in Peru. Their legacy, though, has been lasting.

They live close to nature… I use the present on purpose as the culture is still very much alive. Above all, they worship the Sun God Inti, Mother Earth Pachamama and the Moon Goddess Mama Killa.

For them, there are 3 worlds, or Pachas: Hanan Pacha, where the sun & the moon live; Kai Pacha, where we live; & Uku Pacha, the under world. The 3 Inca worlds are represented, respectively, by the condor, the puma and the snake.

Cusco was originally built in the form of a puma. More recently, rural poverty has driven many Indians to flock to the outskirts of the city, with their makeshift houses sprawling across the mountain sides, so destroying the puma shape.

As part of the Incan rituals, llamas and guinea pigs were sacrificed, chicha (maize) beer was poured into the ground, while quinoa was considered a sacred grain. Coca leaves are still used in ceremonies… and, I can tell you, I chewed enough coca leaves on my ascent of the Salkantay mountain to win lots of favour with the Gods.

My food tour of Cusco started at the San Pedro market. Here, can be found some of the 3,000 varieties of potato that grow in Peru. And it is where I stocked up on red, black and white quinoa, as well as chia seeds.

The market is a good stop for a fresh fruit juice or a chicken soup – make sure it is gallina (older, yellower meat, from the farm) rather than the mass-produced whiter meat of pollo.

I had one restaurant reservation made before I arrived in Cusco and that was at Chicha, part of the gastronomic empire of Peruvian celebrity chef Gastón Acurio, an empire that spreads further than that of the Incas.

His flagship restaurant is Astrid y Gastón in Lima, ranked as No 7 in Latin America. Chicha is a more casual dining affair, with the bill for my two starters, glass of wine and water setting me back the equivalent of US$34 (Peru is a dollar-centric economy).

I had to go for the Alpaca Carpaccio,  in honour of my cousin who now lives in Uku Pacha (the Incas would not say ‘unfortunately’) & who used to have an alpaca farm in Dorset. I once asked her whether you could eat alpaca; she was horrified. At Chicha, it was prepared with turnip flowers, chestnut vinaigrette, crisps and Andean pesto. The meat was tasty, but I found slightly tougher than a beef carpaccio.

Then came Grilled Octopus with a juice made from Anticucho, a popular Peruvian street food of beef hearts, chimichurri, the Incan vegetable of tarwi (Lupinus mutabilis), and a warm salad of two tubers, both new to me, oca (Oxalis tuberosa) and mashua (Tropaeolum tuberosum). 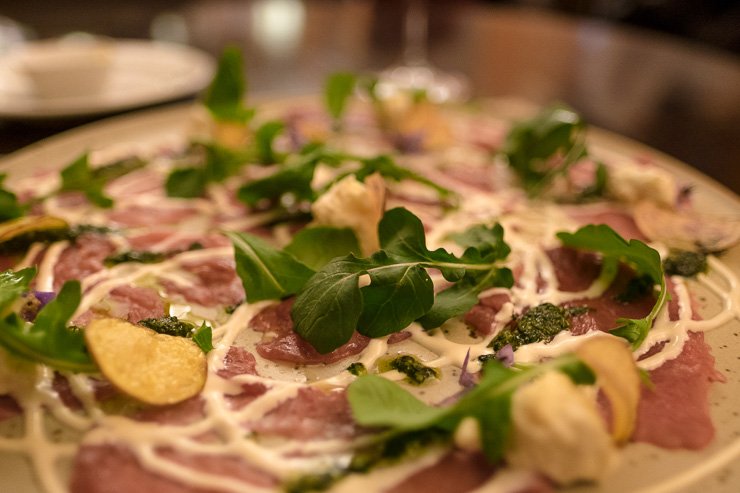 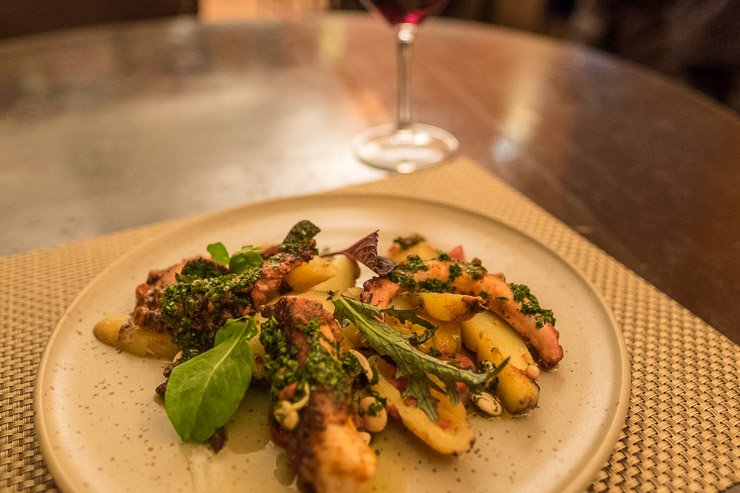 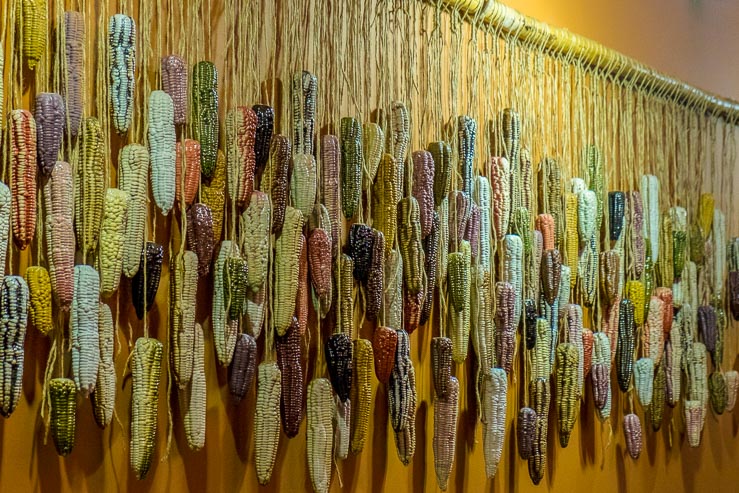 To drink, I had a glass of 2014 Vittoria Syrah from Bodegas Tabernero, produced in the Chincha valley, just north of Pisco, from where the Pisco of Pisco sours comes from. It was a bit too ‘full’ for my taste but I was keen to try a Peruvian wine.

The other restaurant where I had hoped to go, and time was just too short, was Cicciolina. Everyone seems to rave about Cicciolina. It’s on the second floor overlooking a courtyard in the road leading up to the bohemian district of San Blas.

I did manage to make it for breakfast – one of the best breakfasts ever, with homemade croissants and saúco, or elderberry, jam. So good that I must go out picking elderberries next autumn. 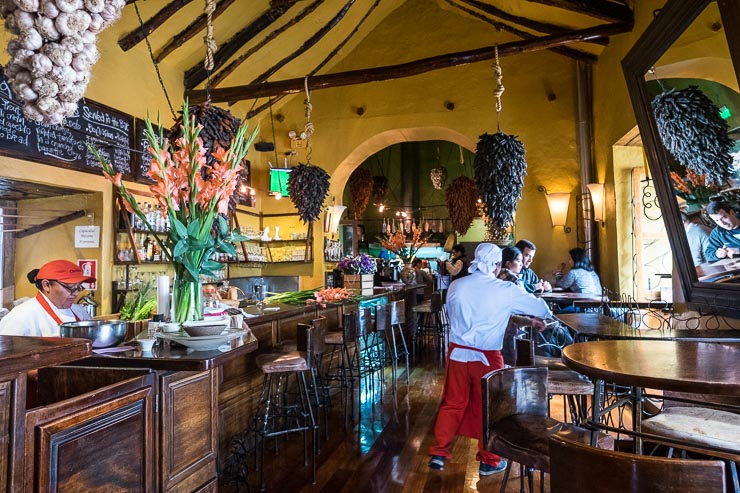 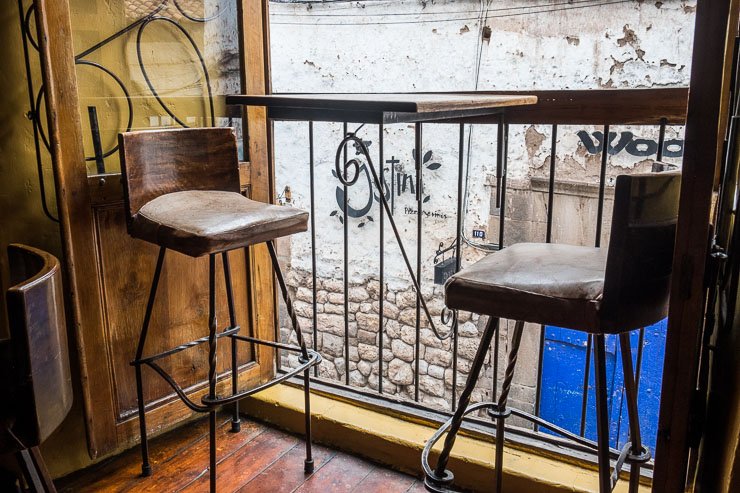 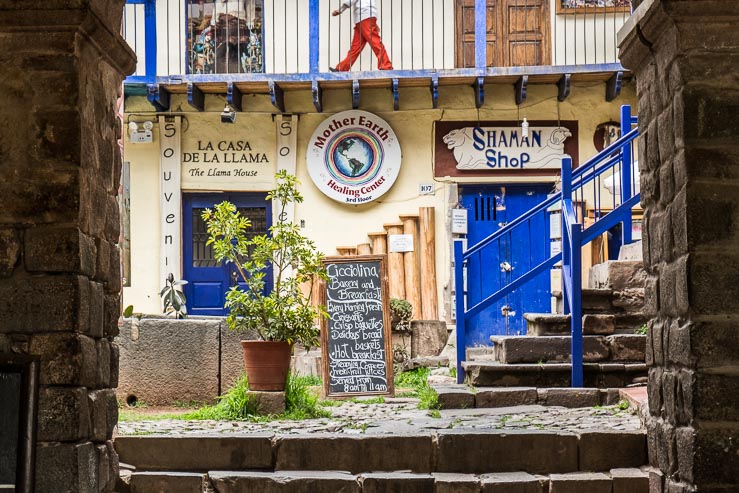 Where else to go

Other travellers I met also mentioned Barrio Ceviche, set up by an Australian who settled in Cusco. Cusco is that kind of place. You arrive. You’re captured by the spell. You don’t want to leave.

Ceviche may be a coastal dish, but there’s plenty to be found in Cusco, usually made from local trout. Another popular dish, especially among the tourists, is cuy, or guinea pig. Jesus and his disciples are even depicted eating cuy and drinking chicha in the Last Supper painting by Marcos Zapata in Cusco Cathedral. The locals nowadays prefer chicken or beef, and keep cuy for special occasions. 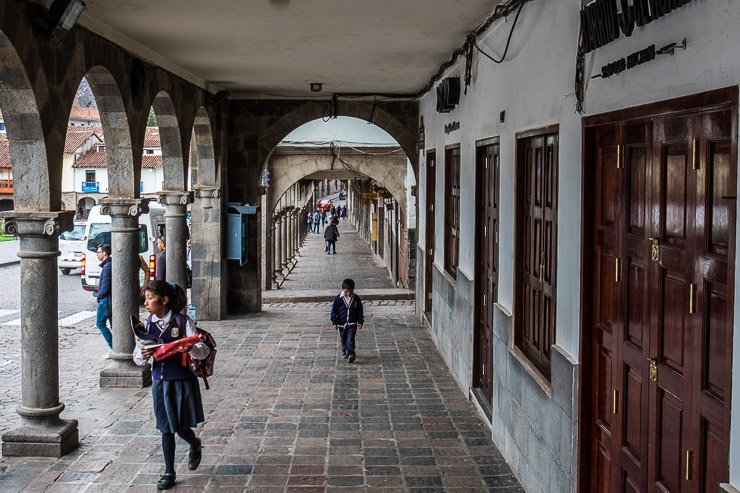 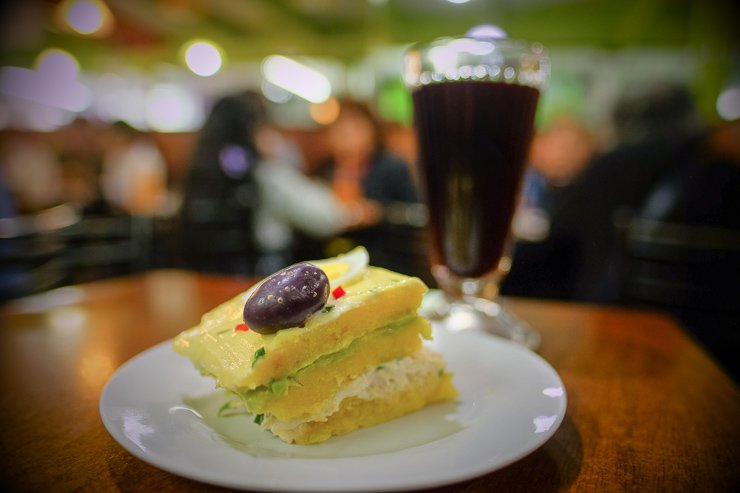 Chicha morada in a local cafe 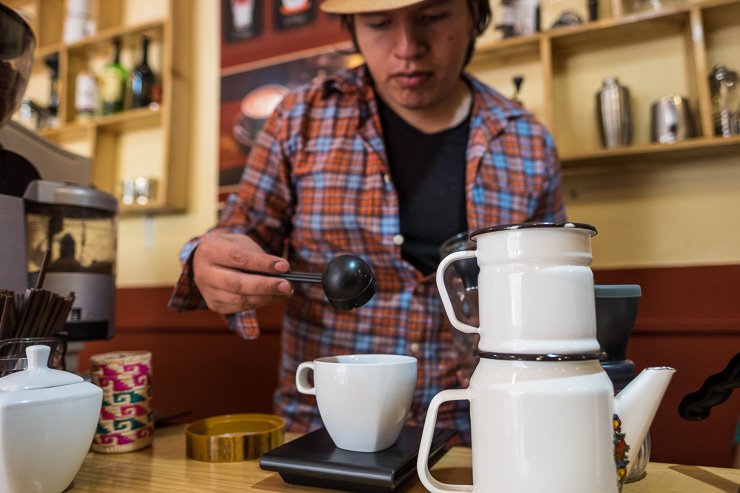 For a cheap eat with the locals, I ducked into La Causita de Marquez and had causa, a layered potato dish with tuna, mayonnaise and avocado (much tastier than it sounds) with a glass of chicha morada, a drink made from black corn. This was also where I bought my empanadas for the return flight to Lima… I never eat on planes.

Looking to try the local Peruvian coffee, I stumbled across D’Wasi, in the same street as Chicha. Wasi means ‘home’ in Quechua. They made me a traditional cup of filtered Peruvian coffee, rather than the more easily found espresso or Americano. The cakes looked good, but I resisted.

Where I stayed – El Mercado

The Hotel Mercado was brilliantly located, a short walk away from the main Plaza de las Armas square, and two blocks from Gastón Acurios’ Chicha. 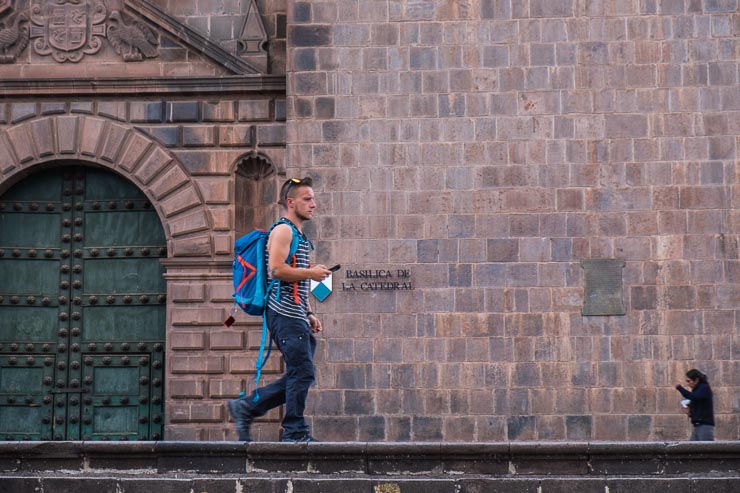 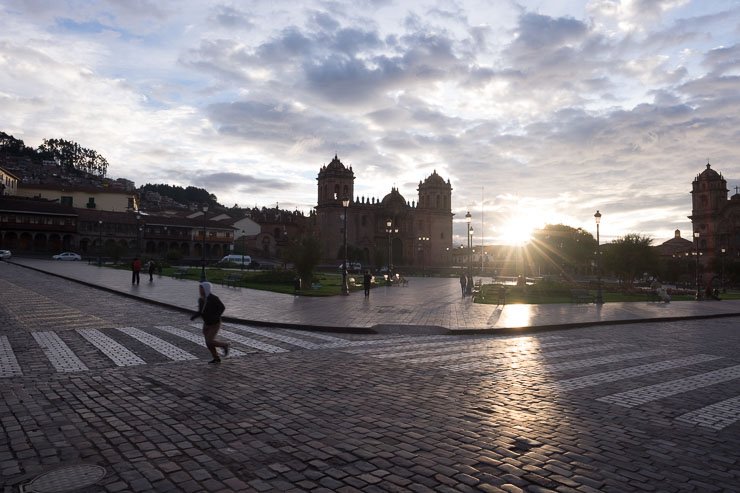 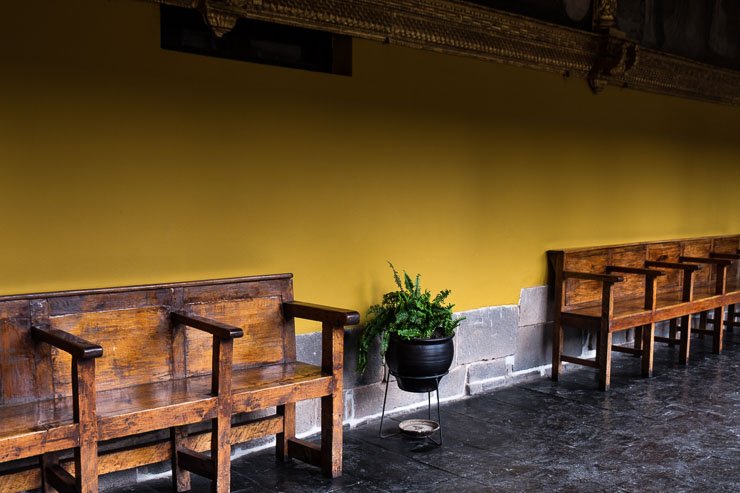 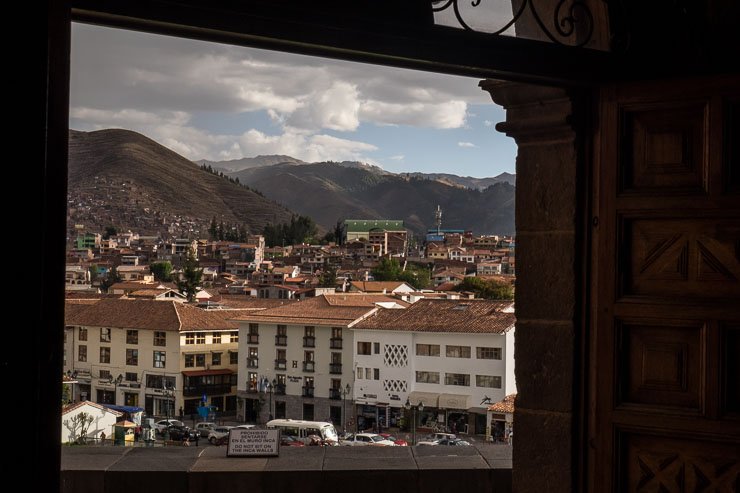 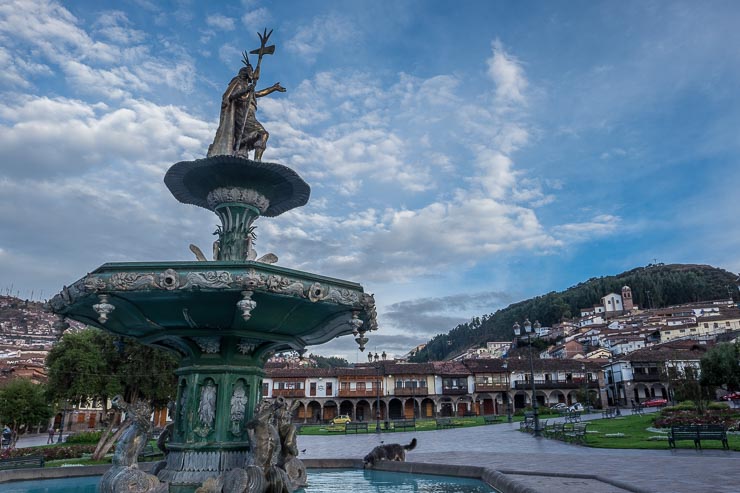