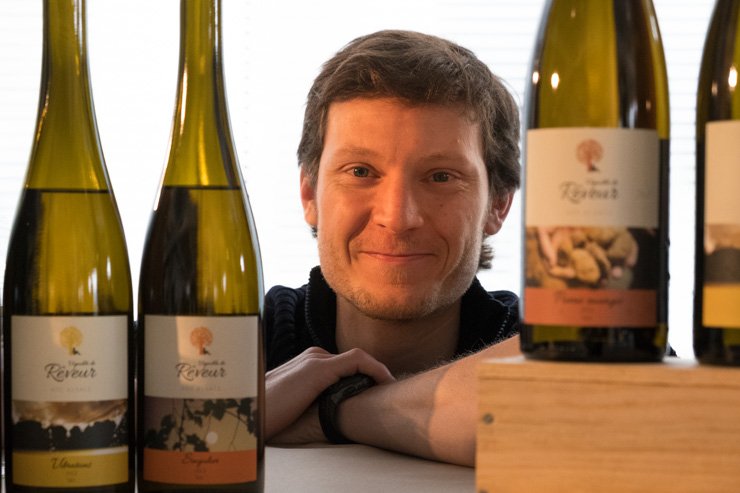 13 Mar The steady roll of the Deiss family in Alsace

I was planning to write about Domaine Marcel Deiss, one of Alsace’s most famous wine dynasties. I still am. But then I bumped into Mathieu Deiss at London’s RAW WINE fair this weekend, so I’m going to write about his ‘passion project’ as well – his Vignoble du Rêveur natural wines.

Mathieu’s main job is at the family domaine, where his father Jean-Michel is slowly handing over the day-to-day reins to his son. I never met Jean-Michel, but I’d like to. He appears a force de nature.

Until 2005, Alsace’s 50 or so Grand Crus had by law to list the grape varieties used. (Grand Crus are the parcels of vineyards officially classified as the best.) That was until Jean-Michel convinced the Institut National des Appellations d’Origine to do otherwise. It’s about going beyond the limits of the grape variety, is the Deiss way of thinking. And Jean-Michel has no plans to stop campaigning.

The story of Marcel Deiss

The Deiss family has been growing grapes in the countryside surrounding the picturesque town of Bergheim (see photos below) since the 18th century. After the Second World War, Marcel Deiss, Jean-Michel’s father, set up Domaine Marcel Deiss, which now has 26 hectares of vineyards.

In all, the Domaine produces 23 biodynamic cuvées, including 3 Grand Crus, a range of Crus d’Alsace (their own classification) and AOCs (Appellations d’Origine Controlée).

I visited Domaine Marcel Weiss last month during my 3-day, 2-night trip with Clos Driver Wine Tours. During the tasting in Bergheim, little reference had been made to grape varieties. Instead, it was about geology, soil and microclimates … the 3 key ingredients to create a sense of terroir, a sense of place, which in turn is reflected in the taste of the wine.

That’s why the Domaine was one of the first in France to turn biodynamic, in the 1980s. Our guide that day was Florian Mercandelli, Marcel Deiss’s Sommelier Conseil. He explained that if you don’t use pesticides and herbicides, then you didn’t need the added amounts of fertiliser. By not artificially feeding the soil, the vines’ roots then grew down towards the bedrock and the ‘essence’ of the soil.

In our tasting, we were given a lump of rock for each wine. This was to explain the local geology, which, as it’s Alsace, is very varied. Grand Cru Mambourg was referred to as being produced from grapes grown on Oligocene limestone; Grand Cru Altenberg de Bergheim on hard limestone & Jurassic Lias marls; and Grand Cru Schoenenbourg on Keuper marls with a subsoil of gypsum.

“It’s about growing the right grape variety for the terroir,” said Florian.”If you’re one metre 50, it’s better to be a jockey than a basketball player.”

It’s all about the mouth

Now at Marcel Deiss, they don’t talk so much about the nose and aroma, but about the experience of the wine in the mouth.  As Florian explained, a whiff of peach for one person can be a nectarine or an apricot for another. Smell is personal. When it comes to taste, we all have the same experience.

That made me happy. I had spent many months a few years ago developing my sense of smell for wine tasting with the use of Le Nez du Vin kit of 54 different vials. I then had an accident and lost my sense of smell. Since then, I have felt in my heart that my ‘nose’ for a good wine is more sensitive and acute than ever.

Origin of the word ‘gourmet’

The word ‘gourmet’ was originally derived from the English word ‘groom’. A gourmet was a wine merchant’s valet. He, as they were always men, would taste wines according to the experience in the mouth, in the bouche. This makes sense as we talk about wine ‘tasting’ rather than wine ‘smelling’.

Somehow, as Florian rolled out ways of describing a wine in French, ‘trenchant’, ‘fin’, ‘rond’, ‘une flêche qui part’, I thought, like words of love, these words just did not sound so fine and noble in English… ‘cutting’, ‘fine’, ’round’, a ‘parting arrow’.

I made a beeline to taste Mathieu Deiss’s Vignoble du Rêveur cuvées when the RAW WINE fair opened in London yesterday. All 3 were dry. All 3 were good. And all 3 were natural… with the Singulier having no added sulphur.

Following in the Deiss family footsteps, each of Mathieu’s cuvées is linked to a colour – that’s how Jean-Michel experiences wine, as a colour.

The orangey-brown label of Pierres Sauvages reflected the taste of this blend of Riesling and Pinot Gris; the yellow label of Vibrations the wine’s lemony acidity (Riesling); and the orange of Singulier the apricot notes… I got pineapple as well (Riesling). But the colours were more than just a reflection of the notes; they went deeper in a way that I cannot describe.  And the soil? Seven hectares of light alluvium.

Mathieu, who I managed to snap at RAW WINE, uses glass corks to help with keeping sulphur levels to a minimum. I’m not technical so I did not ask why; I just accepted this as truth.

As I went to get out my camera, he explained how he had an interest in photography and that he had taken the photos for the labels  – the stones from the vineyards, the juice dripping from the press and the moon shining through the vines.

Once again, evidence that wine is more than about just wine, but about a whole culture – one linked to art, to nature, to people, to lots of things. Wine opens up an experience that allows you to dream, to be a rêveur.

For me other posts on Alsace: