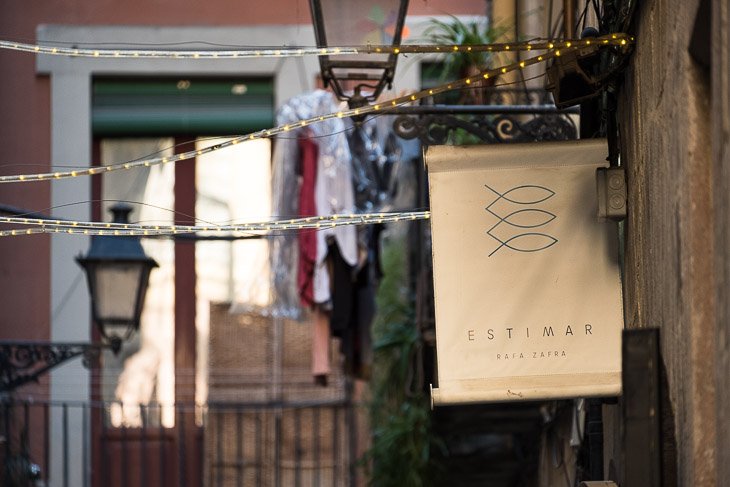 Good seafood is a luxury. I found it at Estimar, an intimate little restaurant, with Andalusian-born Rafa Zarfa at the helm. You can find Estimar in a side alleyway in the old city of Barcelona.

Look at the Estimar website, and you’ll hear, see and feel the sea. ‘Estimar‘ is ‘to love‘ in Catalan. ‘Mar‘ is ‘the sea’ and ‘est‘ are the three little letters found in many conjugations of the verb ‘to be’ in Romance languages.

Blue is the predominant ‘note’ colour at Estimar. The sea is blue, and blue is the colour of the sky. It’s a colour that gives energy. Party goers in a ‘blue’ bar stay longer than those in a space painted any other colour, says the BBC’s Horizon programme.

Where to find Estimar

Estimar is in one of Barcelona’s smallest streets: Carrer de Sant Antoni del Sombrerers, the Street of Saint Anthony of the Hatmakers. That’s what they used to do in this area, once upon a time: make hats. No longer. Now, it’s more about cafés and bars, and little designer stores.

If you’re coming from the main entrance to the Basilica of Santa Maria del Mar, turn first left after arriving at Casa Gispert, a shop famous for its treasure trove of nuts, spices and dried fruits. This is El Borne, an historic district and home to Senyor Parellada, where we had eaten the day before. Tourists abound in El Borne, although less so in November. Estimar is so hidden that only the cognoscenti find it.

I dropped into Estimar on my first morning in Barcelona. I was on the hunt for a table that evening. By chance, I arrived at the same time as Rafa Zarfa, the chef and owner. I knew it was him. He had a je-ne-sais-quoi star quality. I was lucky, as he was not there for my second and third visits. He had gone back home to Andalusia.

You can feel Rafa’s Andalusian roots in the vibe of Estimar. Andalusia is about fiestas, sun, merriment. The Catalans are known as the Swiss of Spain. I won’t go into stereotypes, so I will say no more. I’m British but I don’t eat pork pies. Everyone is an exception to the generalisation.

Before Rafa reached 25 years old, he had worked in restaurants with a total of 14 Michelin stars, all in Spain. He then returned to his native Seville and became head chef at La Hacienda Benazuza, the Andalusian outpost of Ferrán Adrian’s El Bullí, the world’s top restaurant for six years running until it closed in 2011 to make way for the elBullifoundation.

Rafa is married to Ana Gotanegro, Catalan born and bred. Ana has five generations of fish merchants in her family, all from the Gulf of Roses, on the Costa Brava. The sea is in her veins.

Our oceans at risk – an aside

I wonder for how much longer we will be able to eat wild seafood. Our seas are contaminated with plastic and microscopic pieces are entering the food chain.

An equivalent in plastic of the weight of around 1,500 elephants is dumped in our oceans each year (8 million metric tons).

The devastating effect is highlighted by the work of British photographer Mandy Barker, shortlisted this year for the prestigious Prix Pictet Awards with Beyond Drifting: Imperfectly Known Animals and now showing her series Plastic Sea in the newly opened East Wing Gallery in Dubai.

Hopefully we will continue to eat wild fish. Dutch-based organisation, Ocean Cleanup, is looking next year to start clearing the Great Pacific Garbage Patch, as it is called between Hawaii and California. They are aiming to clear all the world’s oceans of plastic debris. Still, we must stop putting plastic in the oceans in the first place.

One lunch at Estimar

Back to Estimar. I ate three times at Estimar in five days. I never do that usually. My policy is to eat once everywhere. I went back as Estimar made me feel content, body, mind and soul.

Dishes are simply done, with a resulting exquisite taste and the quality of the produce shining through. There was no dumbing down of the ingredients by disguising them with a plethora of taste. The decor is wood, glass, blue, white, to give a natural look. The buzz is electric and casual… with the waitresses wearing white shirts, blue jeans and white trainers. Oh, and the bread and olive oil were really good.

An aside on percebes

In Spain, percebes (goose barnacles) come from Galicia. They stick to the rocks in parts where the waves are strongest. The art of the percebeiro, the person who collects percebes, is passed down generation to generation. It’s a dangerous art, and I love this short little video (12 minutes) by David Berlain, released in 2012, on how the percebeiros live.

I was slightly disappointed that there was no natural wine. Natural wine is like marmite, you either love it or you don’t get it. I love it. I was tempted by the Vora La Mar from Alta Alella, a white wine from just north of Barcelona, made from Pansa Blanca, but I was put off by the ‘BARCELONA’ and ‘ORGANIC WINE 2016’ on the bottle.

In the end we stayed with water. I didn’t care. I can eat seriously good seafood without wine. In the meantime, I just keep on going back to the Estimar website to watch the swell of the blue sea, the white waves crashing and the spume frothing.