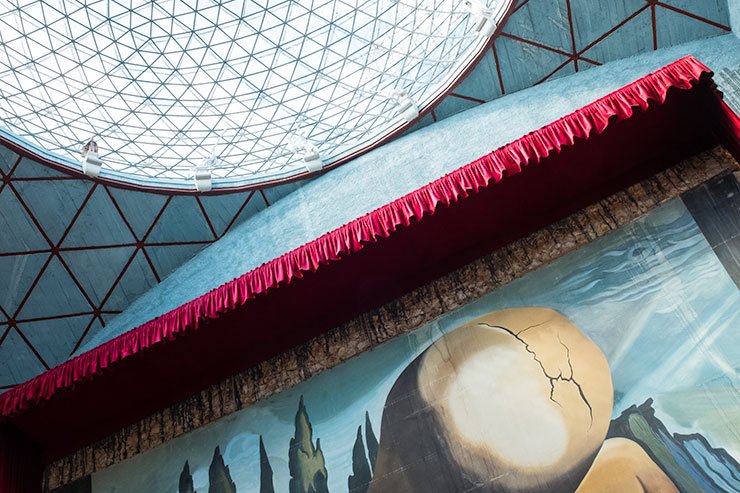 The Catalan town of Figueres is home to the Salvador Dali museum and half an hour from El Celler de Can Roca, the world’s ‘best’ restaurant… two good reasons for a day trip from Barcelona.

My journey to Figueres earlier this October took me a smooth 50 minutes by high-speed train from the Catalan capital to Figueres-Vilafant, & then a short taxi ride to the town centre.

With around 45,000 inhabitants, it’s not a big town. The museum is easily recognisable by its giant rooftop eggs and its bread rolls systematically placed on the terracotta-coloured exterior walls. The maestro himself, born in Figueres, gave the museum the name ‘Theatre-Museum’ – a place designed to entertain, exhibit & share.

Shall I or shan’t I visit the museum? I am not a lover of crowds, and this shrine to Dali is one of the most popular tourist destinations in Spain.

I’m glad I did. Apart from the eggs & bread on the outside, there wasn’t much to do with food inside. But I saw some beautiful works, and it underlined for me Dali ‘s versatility and creativity. As a person, that’s another matter: he openly sympathised with Franco’s fascist regime. (Read about my visit to Dalí’s house at Cadaqués, on the Costa Brava, in September 2018).

Figueres is the capital of the Upper Emporda comarca, part of the province of Girona. The town and the region have strong culinary traditions.

Renowned for its dishes of mar i muntanya, or sea and mountain … langoustine with chicken is a local classic … the region is also one of the richest in Spain, and includes the beautiful Costa Brava and town of Cadaqués, home to another renowned Spanish artist… Picasso.

Food wise in the Emporda, the seaside town of Palamos is famous for its prawns and L’Escala for its anchovies. It was in L’Escala 23 years ago, dare I say, as a journalist, I reported on the arrival of the flame from Athens of the 1992 Barcelona Olympic Games.

To name just a few other local specialities that spring to mind: wine (DO Emporda), apples (from Girona), rice (in Lower Emporda), onions (Figueres), olive oil and pa de tramontana, a bread made from historic, local grains and named after the cold winter wind that blows down from the nearby Pyrenees.

A few snacks before lunch

The benefit of not eating lunch till 2 or 3 in Spain is that there is room for a little morning snack. In my search for local cakes … and these abound in Catalonia … I stumbled across Pastisseria Sierra Lacasa between the Dali museum and La Rambla – whether it is La Rambla or Las Ramblas, this is always the hangout place in any Spanish town.

My philosophy when travelling is that it never hurts to ask to take a picture. This time it was of the cakes in the window … & then, it was my turn to be asked… a picture of me inside the cake shop.

Why is it that it’s more difficult to lie to the camera than the mirror? Oh, my trousers! Why didn’t I roll up the sleeves of my shirt, it looks so baggy? My bag looks like a saddle bag, despite coming from Robert Clergerie. And why am I propped up against the counter? But that is why I am not a model.

I had bought my trousers years ago from the luxury Italian brand Brunello Cucinello. Being British, I will admit I bought them in the sale. Given that they were well worn, I had put them into the ‘for-walking-in-hot-climes-with-mosquitoes’ part of my wardrobe. Just too shabby for Spain! I’ve learnt my lesson.

In the cake shop, I could not resist the Figueres’ speciality: flaones, shortcrust pastry shaped into half moons & filled with custard cream. Delicious! And the thinness of the crunchy pastry made them light enough not to interfere with lunch, although probably not good for vegetarians, as I am sure they were made using lard.

A little walk around the few streets that made up the historic part of town was followed by a quick visit to Antaviana, a 0Km Slow Food restaurant across the road from the Dali museum. With lunch approaching, I ordered a tapa (in fact it was a half portion) of sardines escabetxades (fried & pickled sardines, a local speciality) matched with a glass of Verd Albera 2014, an Emporda wine made from a blend of local variety lledoner blanc, Muscat & Chardonnay. A nice, light entry to lunch.

Meeting a friend in Figueres for work – the real purpose of my visit to the town – we were too late to lunch at Antaviana, so we strolled down to La Rambla to Sentits Gastrobar.

This was a gastrobar, not a tapas bar, my friend explained; half portions of high-quality food, served at the table. We chose one of my favourites … patatas bravas (chips with a spicy sauce), together with local olives, an egg & potato dish with butifarra del perol (a local, uncured sausage), and croquetes made with carn d’olla, the soup part of the hearty, traditional Catalan meat & vegetable stew dish escudella i carn d’olla.

The perfect match for our tapas came in the form of what must be one of my favourite everyday wines for 2015, also an ‘ecological’ wine, as the Spanish call such wines.  Camino 2012, by Emporda winery Terra Remota, which translates as ‘remote land’, given that it is produced at one of the highest levels in Spain, up near the French border.

Some of Terra Remota’s top wines are to be found at El Celler de Can Roca, as well as at the many Michelin-starred restaurants in Catalonia. But if you think you can roll up for lunch or dinner at El Celler de Can Roca, think again! The 11-month booking system sees reservations released at midnight on the 1st day of every month. Instead, we took the high-speed train back to Barcelona, after a good day out.

Figueres restaurants for next time

A ride through medieval Girona

A visit to Cadaques on the Costa Brava

The vegetable garden at Les Cols in the Garrotxa