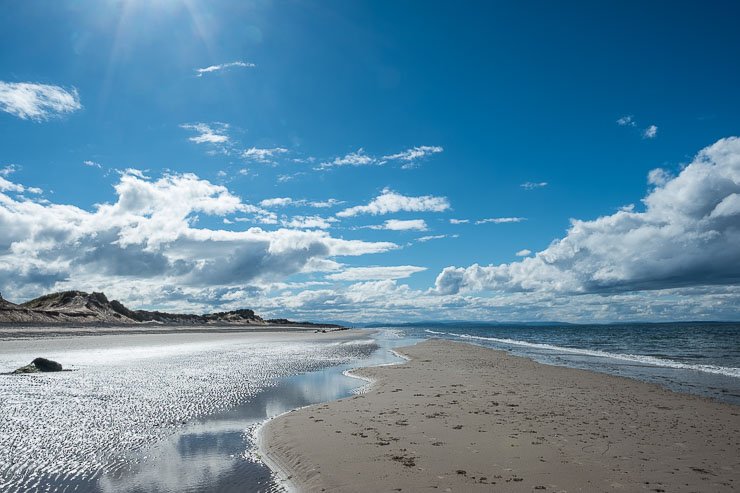 I knew I was in a special place when I spotted Tilda Swinton in her Mercedes-Benz driving through the centre of the Scottish town of Forres.

Tilda, who stars in the soon-to-be-released South Korean film Okja, is an icon for me; she’s stylish, striking, multi-talented and mature. She also lives near Forres, although I don’t know where.

Even though I am only a quarter Scottish, I’m tempted to follow her to live in an area across from the peaks of the Scottish Highlands, on the southern shores of the North Sea inlet of the Moray Firth, drawn by the lure of the sea and the wildness of the mountains.

I was in Forres for a wedding, a beautiful and unique occasion. The reception was held at Brodie Castle, one of an estimated 3,000 castles to have existed in Scotland.

The wedding was a Scottish affair, and one not to forget: men in kilts, bagpipes, whisky, haggis-stuffed chicken, Gay Gordon dancing and tables named after Scottish bands – mine was the rock band Travis.

It was cold, though, with daytime temperatures maxing at 15ºC while down south in London they were more like 30ºC. I had to dance a lot before I took off my alpaca layer. Now I know why the men wear kilts; probably very warm.

We stayed in the village of Findhorn, a 15-minute drive from Forres, at the mouth of the river Findhorn. Mention Findhorn, and most people think of the Findhorn Foundation, a hippy-dippy place with an eco-village visited by people from around the world. I never quite got to the Foundation… and neither did I make it to the European Pipe Band Championships, to be held the following weekend in Forres.

I was too distracted by the sea, by nature… and by The Bakehouse.

The Bakehouse Cafe is in the heart of Findhorn, next to the village store and the Post Office. They bake their own bread, including gluten-free, and use only organic and/or local ingredients. The vibe is one of local community. When I wanted to sit outside, and there was no table, the waiter said: “You can share with the man with the checked shirt, we know him, he won’t mind.”

The prices were reasonable. The coffee was good. It was open every day 10-4, and I could stock up for my evening meal with local produce. Not all but many of the dishes were Scottish, such as Cullen Skink, which comes from the nearby seaside village of Cullen. This soup is made from offcuts of smoked haddock, onions, potatoes and milk – originally a poor person’s food, and a great pick-me-up.

The Dundee Cake was perfect before my three-hour walk along the beach. This traditional Scottish cake is said to have been made originally for Mary Queen of Scots as she didn’t like candied cherries, so whole almonds were used as a decoration on top instead. Then, in the 19th century, the marmalade makers Keiller’s in Dundee started to make the Dundee Cake using surplus Seville orange peel and adding a dose of whisky. 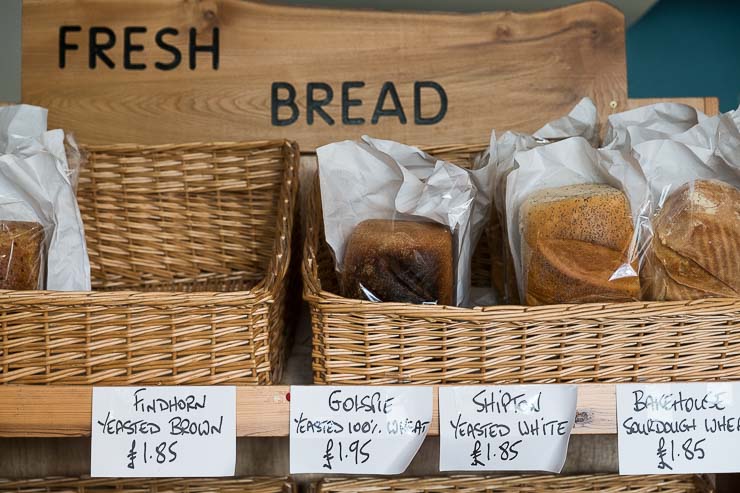 Bread from The Bakehouse 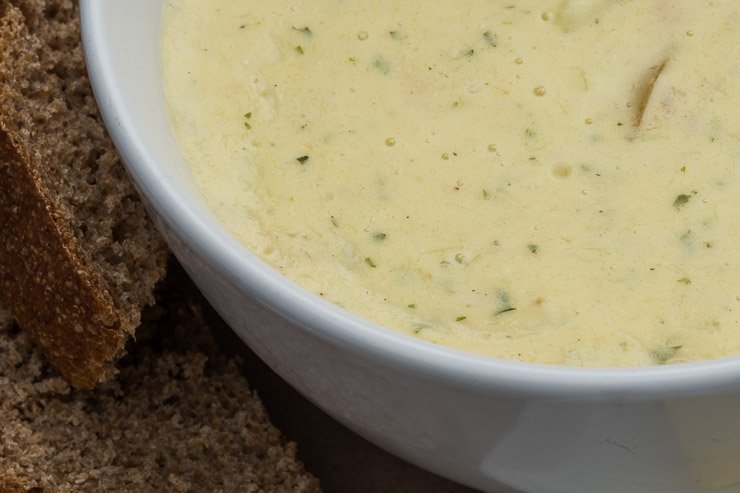 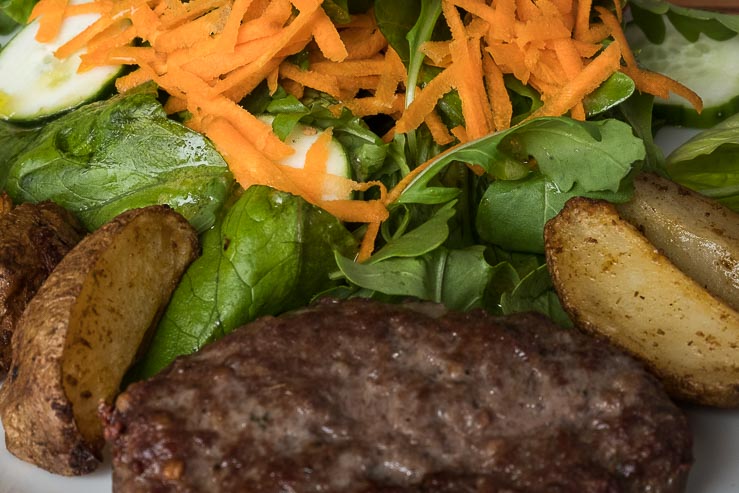 Recharged by nature at Findhorn

This was the best recharging by nature – I am a water lover – that I had experienced since being on the beach at the Sen Wellness Centre in Rekawa, Sri Lanka.

The attraction of Findhorn, apart from The Bakehouse, and the quaint little houses and paths, was the sandy shore … all seven miles of it, along to Burghead, looking directly out across the North Sea. It is also a dog’s paradise, as they leap in and out of the water and scamper down the beach. And with so few people around, when you do pass someone, there’s always a ‘good day’.

There was sun, quite a bit of sun, but because of the ‘fresh’ temperatures, the beach was almost empty. Many a time I looked one way down the beach and the other way, and there was no one. That, for me, is luxury, with the sea, the sand and the mountains.

Findhorn was once home to a thriving salmon processing plant. Then fish farming arrived. Now the Findhorn fisheries have gone. Across the Moray Firth is Cromarty Firth; here there’s big business in decommissioning oil rigs – the oil capital Aberdeen has been hit hard by the slump in oil prices – while nearby Inverness, I was told by locals, was doing well thanks to tourism and tech companies. 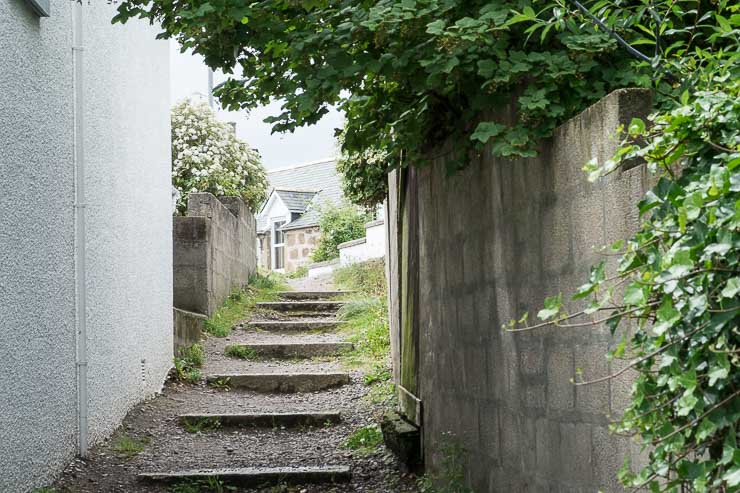 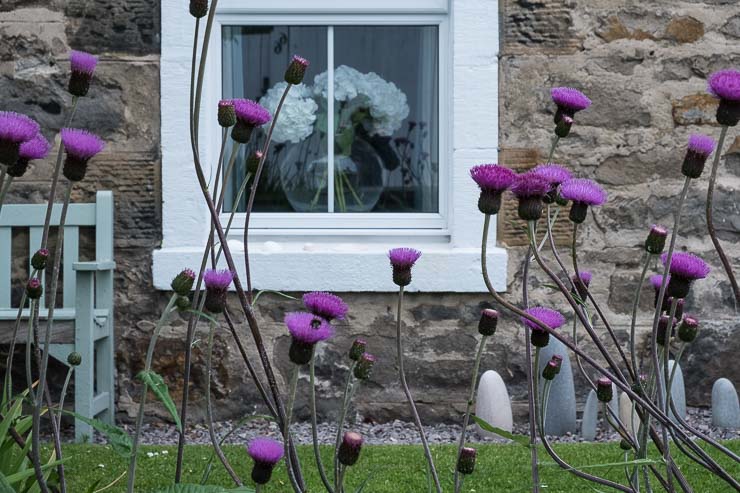 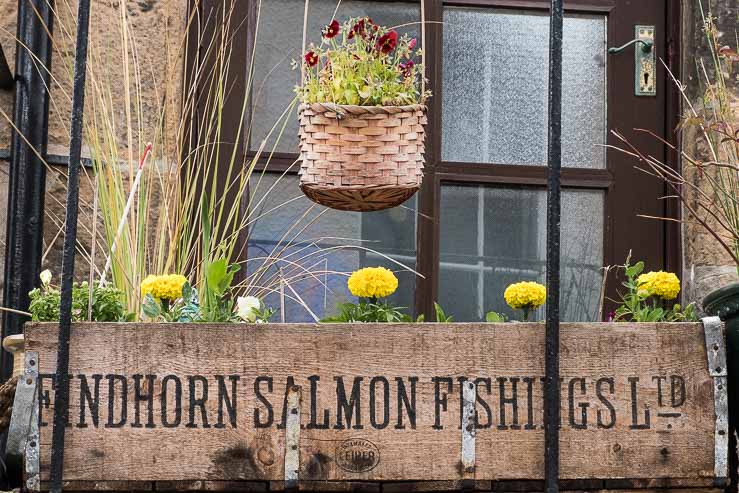 Findhorn is not far from the whisky trails along the River Spey, but I had no car and I was happy to stay on the beach at Findhorn. There’s even a Michelin-starred restaurant nearby, The Boath House, but getting around by taxi is expensive here, and I was too lazy to catch two buses to get there. For next time. 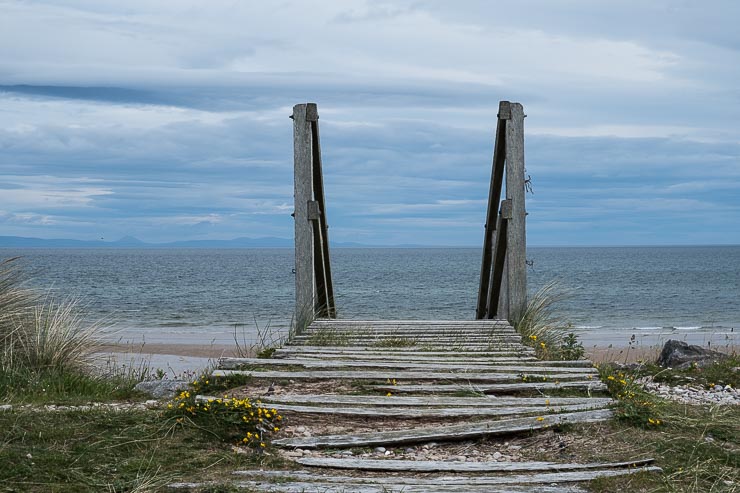 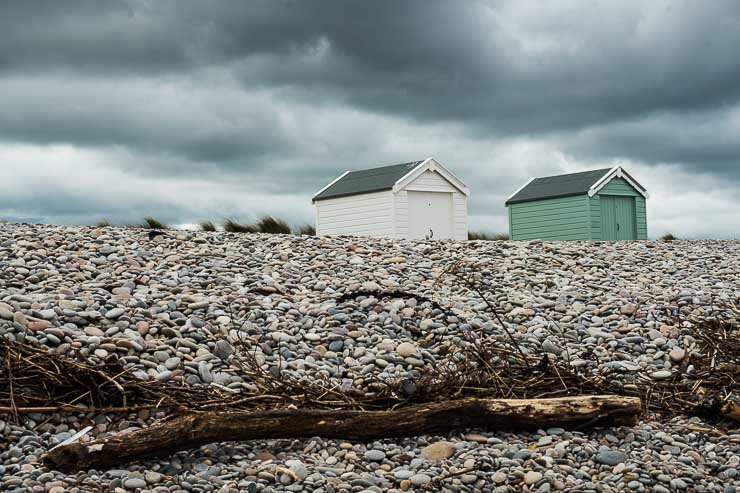 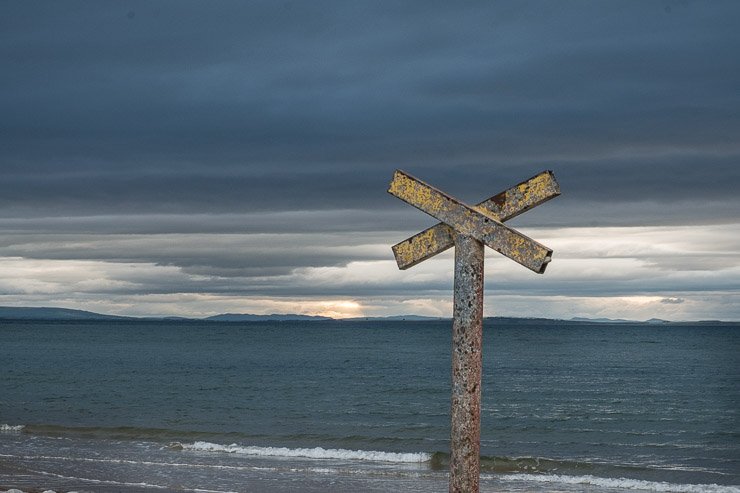 We stayed at a beach apartment booked through Airbnb. It was a real home, and the view from the flat was spectacular, especially when it came to the sunsets.

Sunsets across the Moray Firth

Sunsets are special in Findhorn. Given that it was a few days before Midsummer, the sun set at just before 10.30pm and rose at about 4.15am. To be on the beach late in the evening watching the setting sun, with a slight wind, and usually alone is a phenomenal experience.

One evening, about an hour before the sun set, I walked to the mouth of the River Findhorn to watch the seals, their heads bobbing up and down in the water – a special moment.

My last three blog posts (Timberyard in Edinburgh, Mac & Wild in London and Daniel Morgan as Guest Chef at Carousel) have made me more and more focussed on the benefits of foraging. There’s something primordial about eating wild things directly from the land. It also makes you more aware of what might be edible – whether heather for honey, cockles, pine needles for tinctures or seaweed.

One thing is for sure if I move to Findhorn, or the Scottish Highlands, I want a decent shower, to cover all of myself with warm water, to heat myself up, as well as having a well-insulated home. Together with a few whiskies, I should be OK.

Tomorrow, five days after coming back from Scotland, I’m travelling as far south as I went north – to Lyons, in France.

In the meantime, I leave you with track my favourite track from Travis, with memories of the special wedding and the magic of seashores and Highlands of Scotland