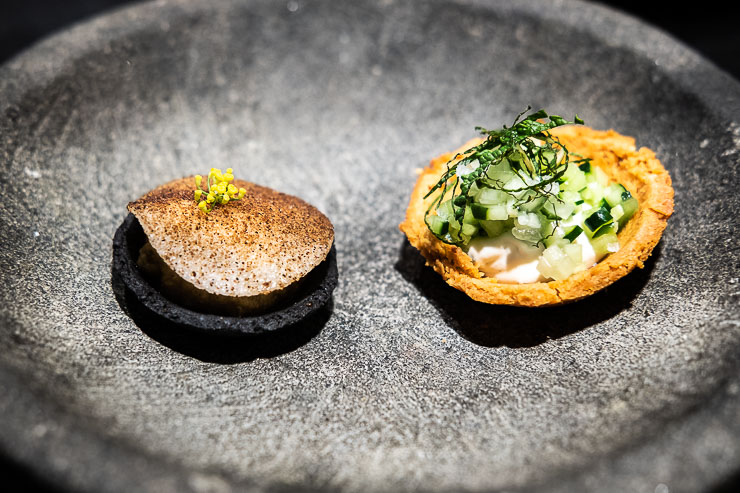 Familiarity is comforting. It creates a warm feeling. That’s why I returned to Fleur de Pavé this autumn (2021). The one-Michelin starred restaurant of Sylvain Sendra’s is less than ten minutes’ walk from the Bourse de Commerce, in the first arrondissement of Paris. It’s also open Monday to Friday, lunch and dinner – useful to know in Paris, where so much is closed on a Monday.

Life goes round in circles. This was the third time that I had visited a restaurant run by Sylvain Sendra. The first was Les Itinéraires. Sylvain had got to the end of the road at Les Itinéraires, closing its doors back in 2017, to travel and find culinary inspiration in Lebanon and Thailand.

He came back to Paris and opened Fleur de Pavé in 2019, on the left bank rather than the right. When I visited his new restaurant the same year, my mind was focussed on the new kind of luxury emerging at the time – one more connected with nature, less pretentious.

This time, in November, the same month as before, my visit was purely to enjoy a good meal and a glass of wine, before taking the Eurostar back to London on a Monday afternoon.

Sylvain still works closely with Asafumi Yamashita, the Japanese vegetable whisperer, who grows his vegetables in Chapet, northwest of Paris. You can read more about him in my blog post on Les Itinéraires, as well as in The New York Times.

In short, Asafumi only supplies vegetables to chefs who know how to cook them, namely to Sylvain, and to the likes of Pierre Gagnaire, Pascal Barbot at L’Astrance and Christian Le Squer at Le Cinq. All of a sudden that €95 tasting menu (still the same price two years later) at Fleur de Pavé seemed extremely good value compared with the €350 (now€380) for Le Cinq’s ‘Epicurean Escape’.

The origins of the name

Mixing my pavés, I had thought that Fleur de Pavé was named after a cheese, as some square-shaped cheeses do have pavé at the start of their name. In fact, it means a ‘flower of the cobblestone‘, a lady of the night – a reflection of what used to happen in this small side street, rue Paul Lelong, just off rue Montmartre.

For my first visit: BBH vin nature – a white Bordeaux, a blend of Colombard and Semillon from Château l’Hospital in the Côtes de Bourg, where Christine and Bruno Duhamel are the vignerons; and Côte-de-Nuits-Villages 2014 Jane Eyre – made by Jane Eyre, an Australian-born vigneron who lives in Burgundy.

For my second visit, a white Saint-Joseph by Aurélien Chatagnier. In the photo, you can just see to the left the ‘Scottish’ bread served – a brioche-type bread to dip in olive oil, first baked by Jean-Luc Poujaran, in the 7th arrondissement, or so I read in L’Express magazine.

Both times I went for the déjeuner parfum végetal, the vegetable-focussed lunch menu, with four courses at €45. Given that my second visit was in the same month, if not week, of the year, the dishes were similar, but still just as exciting.

The main picture shows the amuse-bouches: tzatziki on a parmesan sablé and a black rice tartelette (which took me back to Les Itinéraires) with caviar of aubergine, smoked labneh (a soft curd cheese originally from Lebanon), daikon (the white winter radish popular in Japan) and Roscoff onion flowers.

Fine-tuning with a mandolin

The chefs use a mandolin to finely slice the vegetables. I have one of these at home. They make it look so easy.

Reflections on the mignardises

The coffee is from Coutume, who have an eponymous café near Le Bon Marché department store, The mignardises (the bite-sized deserts that go with the coffee) were white marshmallows, raspberry jellied fruit and small tarts with chocolate and dried capers – a mix made in heaven, and so much so that I forgot to take a picture.

I caught the Eurostar later that afternoon, feeling relaxed, well fed, well looked after and happy. What more can you want in life.

For more of my stories about Paris.