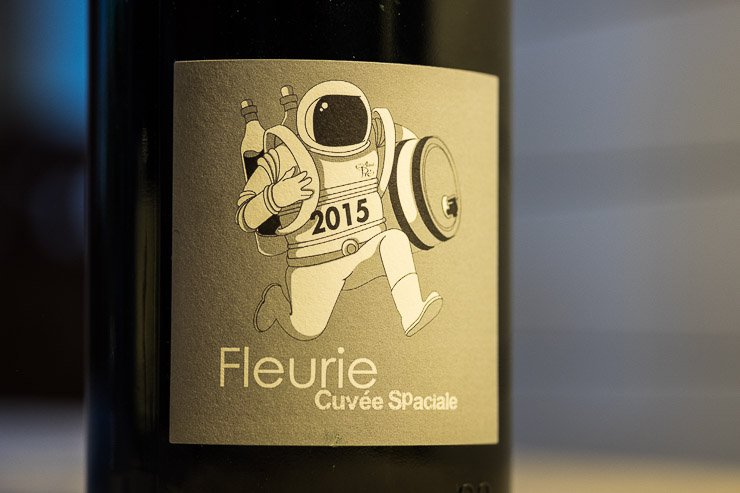 03 Jan 2017 takes off with a Fleurie from Beaujolais

My first wine in 2017 was a Fleurie, a Cuvée SPaciale 2015. With the dawning of a new year, I was searching for the safety of warm memories from my last trip, to Fleurie, in the wine-growing region of Beaujolais, an hour’s drive north of Lyon.

I chose Cuvée SPaciale to kick start the New Year. I was in a ‘one giant step for mankind’ mode; and this time the astronaut is equipped with a barrel of wine. Take note: (one of) my New Year’s Resolutions is to drink more good wine & eat more good food.

“What will 2017 be like?” I was asking myself. Whatever happens, it’s going to be about change, and change can always be inched round to become a force for positivity. Or that’s what I like to believe.

Back to wine, and my trip to Fleurie in December. Cuvée SPaciale is made by Romain Zordan. Romain and his cousin Yann Bertrand are two young winemakers whose families have been producing wine at Château de Grand Pré in Fleurie since the 1970s.

They each have 8 hectares, or 20 acres, of vineyards, with vines planted 60 years ago, if not more; they share the same cellar, and a lot of the same equipment; and they are both starting to make waves in the wine world, with their high-quality, natural wine. Yet they produce their own very distinct cuvées.

This was my first visit to Beaujolais, and the landscape was beautiful. Below is the view towards Fleurie from the Chapel of the Madonna, a 19th century chapel surrounding by Cru vineyards. I was there with Clos Driver Tours, the Lyon-based luxury wine tour company.

Now Fleurie is one of 10 Cru Beaujolais. This is the title given to the top-ranked communes for wine production in the region. The two AOC (Appellation d’Origine Côntroléee) in Beaujolais without this status are Beaujolais AOC and Beaujolais Villages AOC, which have vineyards on the lower, flatter lands.

About 98% of Beaujolais wines are red and all Beaujolais reds are made from one grape variety – Gamay… a variety almost, if not, unique to Beaujolais. That’s enough facts for the moment, given that we are now in a ‘post-truth’ society.

I don’t see myself as a wine expert, and to be honest I’ve always avoided Beaujolais wines… too much bad Beaujolais Nouveau in the past. Romain and Yann have converted me: their wines are made with passion, care and expertise, and as ‘naturally’ as possible, and the taste is my kind of taste.

Taking Cuvéee SPaciale as an example. This is a wine that is light when compared with the Bordeaux I normally drink. It has an appetising acidity, and is full of fruity flavour… hints of cherry, for me. It will go with any meat, charcuterie, lots of things, as well as vegetarian dishes.

I go through bottles slowly, sometimes, and I enjoyed Cuvéee SPaciale with a tomato & herb pasta dish with touches of anchovy & black olives; then with a lardon and mushroom omelette with a green salad; and finally, with my son, traditional roast lamb.

Now I have always thought that being a small producer must be pretty lonely. This is why I like to work in an open-plan office, as you have plenty of people to bounce ideas off. The best of anything is always produced through teamwork, is my theory, rather than by sole strivers. So Château de Grand Pré was my kind of place. And the two cousins seemed to enjoy the company of each other. No awards for guessing who’s the youngest.

Romain and Yann’s wines can be found at all the “bonne tables” of Lyon, as a friend in the industry told me, as well as across France, where Yann sells his biodynamic wines to 25 Michelin-starred restaurants. Key markets outside their home country are the US, Denmark (very important for natural wines), Belgium and, for Romain, the UK… I bought my Cuvée SPaciale for £25.90 at The Sampler in South Kensington, well worth every penny.

Like other producers in Beaujolais, to be AOC the grapes are harvested by hand and the whole bunches are vatted. In addition, given that these are natural wines, only minimum sulphites, if necessary, are added; the yeast is natural, from the grapes themselves; and there’s no filtering.

Before arriving at Château de Grand Pré, we stopped off at the Café des Sports for a coffee and a slice of homemade Tarte aux Pralines, a typical lyonnais tart made with pink pralines. This gave me some much-needed energy; I was still jet-lagged as I had returned from Los Angeles not even two days before.

I liked the Café des Sports. A typical French café. Smiles are only made when genuine, and the coffee and the tart was good. This is where the wine producers hang out, to talk about wine, the weather, sport, or whatever wine producers talk about… local gossip, as well, I presume. The other popular café is La Bascule, next door. Both are opposite the church, in true Catholic tradition… and I was brought up a Catholic.

Chapel of the Madonna

After our visit to Château de Grand Pré, we drove up to the Chapel of the Madonna, with views across Fleurie, just as the mist was lifting and the blue skies appeared. The view is not to be missed.

So that’s about my first drink of 2017. And my last drink of 2016? Champagne RH Coutier… but that’s a story from last year, when I was in Champagne in sub-zero temperatures.