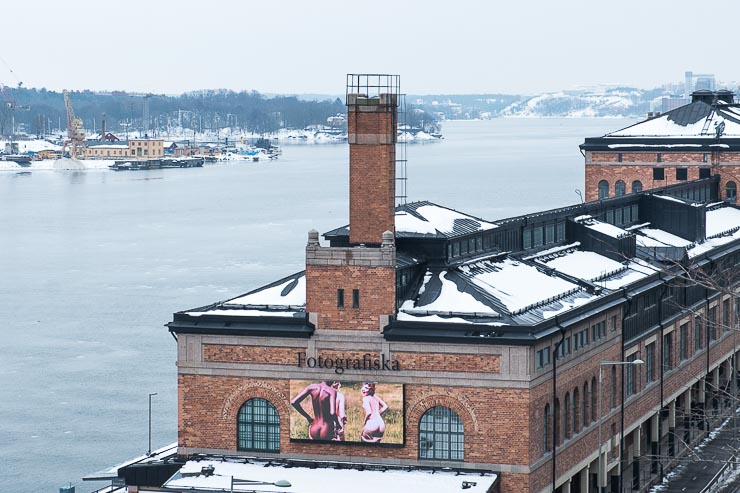 21 Mar Fotografiska: a new frame on the world

Sweden is a small country with a big punch. It’s revolutionised our lives in terms of music (Spotify), design (IKEA), crime fiction (Nordic noir) and food (foraging). The latest Swedish revolution comes from Fotografiska, the Stockholm Museum of Photography – a ‘museum for the future’.

UPDATE July 2020: Fotografiska opened Fotografiska New York in December 2019. I can’t wait to get on a plane and visit. I was due to be there, for Paris Photo New York. But the pandemic stopped that!

This private museum looks to inspire a more ‘conscious’ world, to create an ‘international melting pot‘ through ‘world-class photography … an avant-garde restaurant with a buzzing bar scene, a learning academy and modern conversation hub‘.

I look for museums to engage my senses with the present and to inspire me for the future. When I visited Stockholm in March, Fotografiska’s museum did just that.

Founded by brothers Jan and Per Broman, Fotografiska opened in Stockholm in a converted customs’ building in 2010. There’s only one space … that you pay (once) to enter, giving you access to the three exhibition spaces, restaurant, bar, cloakrooms, event rooms. That one space is open from 9am till late (till after midnight towards the end of the week), every day of the year apart from Midsummer’s Eve and Christmas Eve. That gives the ‘guest’ a lot of freedom to come and go, and wander.

Both brothers, Jan and Per, have their roots in photography. They started off developing their own pictures in their father’s darkroom. Their father was a printer for daily newspaper Dagens Nyhter. I used to work in print. I love print. Per went on to become a professional photographer.

My visit on International Women’s Day

I was in Stockholm for a brief visit. I wanted a break from London and to experience Restaurant Frantzén, hot on the heels of its being awarded a third Michelin star. I was also inquisitive to see what Fotografiska would be offering London and New York.

My visit fell on a day when it snowed and snowed, and the temperature never edged above zero. It was also International Women’s Day. Two exhibitions were showing: one of works by German-born Ellen von Unwerth and the other by South African visual activist Zanele Muholi.

To raise awareness on International Women’s Day, and as part of the museum’s vision of inspiring a more conscious world, men were charged 13% above the regular day ticket price of SEK145 (£12 or US$17) that day – that’s the difference in the gender pay gap in Sweden. The extra money raised went to charity.

Fotografiska looks to question what we eat and drink as well as how we see the world through photography. It looks to ‘nudge’ us, the guest, to a more sustainable future. Don’t panic. It IS about ‘sustainable’ pleasure – the bar has visiting DJs and champagne evenings, and the atmosphere is full of vibrant energy… Swedish people like to celebrate.

The menu for the restaurant and cafe is ‘plant’ based. Perfect for vegans and vegetarians. With a touch of meat for those who can’t do without it. And fish, of course. This is Sweden. It’s about eating local, seasonal produce, with a minimum of waste.

For lunch I had the typical Swedish dish of Skagen on Rye, with shrimps, mayonnaise and dill on a slice of rye bread. The manager told me that they would take it off the menu the next day. Instead they would offer Shrimp Sandwich, with fewer shrimps, and with cabbage, fennel and horseradish. That was to avoid the “unsustainable” process of sending Swedish-fished shrimps to Asia to be shelled and returned for eating in Sweden. I like that.

In Stockholm, the exhibition space is on the first two floors, and the restaurant, café and bar area runs the length of the top floor. The whole top floor area, with its big open windows, overlooks the water, towards the island of Skeppsholmen. It is one of the best views in Stockholm.

The layout was great for yo-yoing up and down, to and from, the exhibitions.

I had my morning fika (that Swedish habit of coffee and a pastry), then went to the Ellen von Unwerth exhibition, followed by lunch, then down again to see Zanele Muholi‘s self-portraits. I returned two days later for the opening of the Christian Tagliavini exhibition and for the weekend brunch.  I would have also liked to have gone along for evening dinner… another time.

My visit… starting with fika

My visit started with fika… a bryggkaffe (brewed coffee – smooth, black, self-service from an urn) and a cardamom bun … one of the best in Stockholm!

Down to Ellen von Unwerth

I then went down a couple of flights to the Ellen von Unwerth exhibition: Devotion! 30 Years of Photographing Women.

The exhibition took us on a journey through the feminine themes of Power, Play, Drama, Gender, Passion, Love and Lust – described by von Unwerth as “facets of a prism through which I love to look at women”. Swedes don’t flinch when it comes to sex and all its different guises.  If only other cities, such as London, had such open views.

Up the stairs for lunch

For lunch, it was the Skagen on Rye. The music was so good, I couldn’t stop Shazaming. Meanwhile, I was surrounded by different groups of people – some working on their laptops, one discretely on a conference call, others there to meet with friends, and many guests for the exhibitions… Swedish, American, Asian, other Europeans. It’s one of most visited attractions in Stockholm… but without that frenetic touristy feel.

Then it was down again via the other staircase, past the Wall of Fame, with images of internationally famous photographers taken by Swedish photographer Knut Koivisto, to the Zanele Muholi exhibition.

This was a first for Sweden, a solo exhibition of the work of visual activist Zanele Muholi… her ongoing self-portrait series Somnyama Ngonyama (Zulu for ‘Hail the Dark Lioness’). It posed critical questions about social justice, human rights, homophobia and how the black body is represented, accompanied by a very good, comprehensive video about her and her work. Again, the music was key.

Earlier in the year I had taken a course in ‘queer photography’ at the Photographers’ Gallery in London. The more we study a subject the more empathy, understanding and openness, this allows us to have.

Christian Tagliavini – at the weekend

I returned to Fotografiska for the opening day of  The Extraordinary World of Christian Tagliavini.  A self-taught photographer, Tagliavini is also a graphic designer and a draughtsman. And his works reflect that. He was born in Switzerland and raised in Italy.

Included were works from his most recent 1406 series as well as from 1503, which creatively redesign pictures from the Italian Renaissance period. Also showing were his Carte series, based on playing cards, and Voyages Extraordinaires, inspired by the adventure books of Jules Verne.

I don’t do brunch. I like a simple breakfast and then lunch. Brunch at Fotografiska is different. It’s also a sell-out event. It’s buffet style, with waiting staff to seat you on round, communal tables and to serve drinks. Several of my very friendly neighbours were drinking champagne.

There were four tables of food – breakfast, cold, hot and dessert.  I didn’t do it justice. My energy levels were still high from the 20-course menu at Frantzén. However, this was the last meal before I caught the plane back to London. A perfect ending. It has also made me change my diet at home – to be more plant based.

A note about travelling to Fotografiska

I stayed on the island of Skeppsholmen, and walked everywhere. Nowhere took longer than 40 minutes.

To get to Fotografiska by foot, you cross over to the island of Södermalm from Gamla Stan. You can then either walk along the main road by the water, or, once on Södermalm, walk up the steps to NoFo – so called as it is the area north of Folkungagatan street – and along the top of the ridge, with views across the city.

If you take the NoFo route, you can pass the very beautiful Katarina Church and then walk along the neighbouring streets with their old wooden building, and down the cliff again to the museum.  I would recommend the detour via NoFo, at least once.

On a final note, Fotografiska is about making the world a better, more sustainable place through the power of photography. It’s about Inspiration, Innovation, Sustainability and Innovation. Lofty values. It has my vote. I’ll be becoming a member in London.