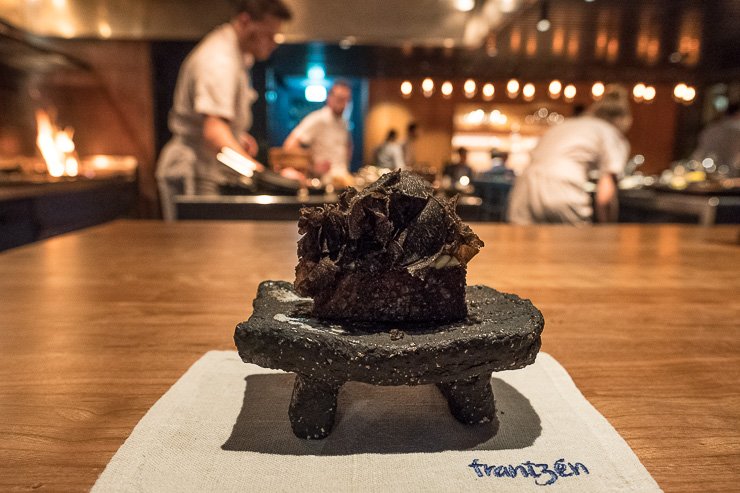 2021 is set to be quite a year for Bjorg Frantzén and his eponymous Swedish restaurant group. With three restaurants in Stockholm, a two-Michelin star restaurant in Singapore (Zén), Frantzén Kitchen in Hong Kong, the group is now due to open in Shanghai, Bangkok and Singapore.

The top star in the crown will still be Restaurant Frantzén in Stockholm. I went there in March 2018, and wow, what an experience. That was one month after Michelin awarded Frantzén 3 stars – a first for Sweden, and a third for the Nordic region, to join Geranium in Copenhagen and Maaemo in Oslo.

The opening of Frantzén in Norrmalm

With the opening of Restaurant Frantzén in the Norrmalm district of Stockholm in 2017. Björn Frantzén, head chef & founder of Frantzén, reset the world’s culinary compass towards Sweden – a relatively underpopulated country renowned for crime drama, cool design, tech start-ups, foraging and skinny-dipping.

That snowy day in March in a BC (before Covid) world, I’d walked around the city for 15 km/10 miles in the falling snow. Even the ducks looked cold. I was hungry. Very hungry. I had made my reservation for 5.30pm. You don’t have to eat that early, but many Swedes do. Travellers from the US will feel at home.

Frantzén sits 23 guests at a time, around an L-shaped bar made of solid walnut and overlooking the kitchen, with some individual tables. That equates to 500 covers a month. With news out of the third Michelin star, around 95,500 people took to the internet to unsuccessfully try to reserve for April.

Nothing feeds the emotional appetite like scarcity; the sense of something being very special, very unique, very precious.

Frantzén first opened in 2008 as Frantzén/Lindeberg on the Old Town island of Gamla Stan. It was a partnership between Björn and pastry chef Daniel Lindeberg. The restaurant took its second Michelin star in 2010. With the departure of Daniel in 2013, Björn changed the name to Restaurant Frantzén. He then closed in 2016 to prepare for last September’s opening in downtown Norrmalm, not far from the Central Station.

The new Frantzén is in the quiet street of Klara Norra kyrkogata, at No 26, in a 19th-century labyrinth of a town house. The restaurant spreads up and over three floors: the ‘Living Room’, the kitchen & dining space and the reception.

The designer Joyn Studio look to ‘put people in the right mood’.  And they sure do. At Frantzén, it’s all about ‘casual elegance’ with a Nordic/Japanese influence.

When I meet great chefs, I feel star struck; like when I met Virgilio Martínez of Central in Lima. It was no less so in the moment when I met Björn. He greets all the guests personally; a greeting that is genuine and sincere. Great leaders make you feel seen and listened to. Björn does just that. He radiates charisma, in an understated, Swedish way. But then he used to be a professional football player.

I wanted to take a portrait of him, but the light was set for dining rather than photography. It wasn’t in me to take a so-so photograph of a man who was all about creating the perfect experience.

The late Franca Sozzani, Editor of Vogue Italia, defined luxury as having an “exclusiveness, nearly [sic] uniqueness … because it is special.”

There is only one menu at Frantzén, the fixed menu, which set me back the price of the sweater that I wanted to buy from the Acne Studios store in Norrmalmstorg street, in a building that was once home to the bank made famous for a robbery in 1973 that coined the term ‘Stockholm syndrome’.  That sweater was not unique, and is sold around the world.

Dining at Frantzén, meanwhile, is unique. When I go back to Frantzén, it won’t be the same – with new menu, new music, different guests, and I would have changed as a person. In any case, I would have ruined the Acne Studios sweater in the wash, like I usually do.

Once I had pressed the buzzer and entered through the hardwood door at Klara Norra kyrkogata, No 26, I was greeted in person and by name. For this was to be a very personal experience. My gaze, meanwhile, was distracted by the dry-aged meat cabinets in the reception area. They were hung with pork from Frantzén’s own farm and quail from France.

I was then guided through a sliding glass door, along a dark corridor lined by two rills with floating orchids, to the lift, where the tunes of ACDC‘s Back in Black took over as I went up to the second floor – a moment on my own to reflect on how the evening might unfurl.

The General Manager, Carl Frosterud greeted me on my arrival at the second floor, escorting me down a corridor lined with jars of pickles and conserves, past the door to the terrace – it was far too cold to go outside – to arrive at the Living Room, tucked under the eves, with its log stove warming the heart as well as the room.

Carl led me to a comfy chair in front of the fire and with a view towards the open kitchen, where the chefs were preparing the appetisers.

Calm music flowed with the rhythm of the room. This was food as art, as performance, as connection between mind, body, soul. 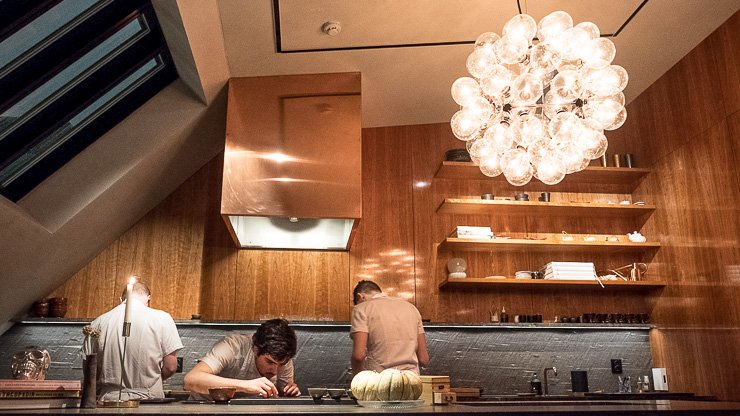 Appetisers by the fire

As if by magic, the appetisers started to sweep their way in, as the snow continued to fall in the darkness outside and the logs in the Frantzén fire glowed hot. The first one was a macaron of pumpkin, foie gras, orange, sea buckthorn and toasted oats, which I accompanied with a gooseberry and lilac syrup-infused fruit juice.

The sommelier, Lukas, invited me to the kitchen area. He slid back a cover on the kitchen counter to reveal some of the ingredients we were going to eat that evening.

Each ingredient had a story. Many were Nordic. Some were not: like the myoga, Japanese ginger, of which only the flower buds are eaten, while Frantzén’s own-label caviar was sustainable caviar from France.

A paring with fruit juice

A fruit-juice rather than the wine pairing seemed more Swedish to me. The chefs, working with the sommeliers, had created ten different juices,. I did not taste all of them. Each one I did blew my mind in the same way that a good wine does, with the sommelier paying as much reverence to the juices as to the wine.

Needless to say, Swedes are big drinkers of good champagne and wine.

Looking at the wine list, I saw a few names of domaines that I knew from working with Clos Driver Wine Tours: in particular Dhondt-Grellet (at 26 years old , Adrien was named Champagne Producer of the Year 2017) and Domaine Weinbach (Alsace) to name two.

The secret in life is to know when to get off your ride, as well as when to get on it. Just when the moment peaked (the time to get off), I was accompanied along the corridor, down one flight of narrow stairs to the kitchen. It was here that I was personally greeted by Björn. I then took my seat at the end of the L-shaped bar, ready for the performance.

As I began to watch the chefs prepare our meal, their synchronisation started to mesmerise me, to the beat of the music. I last recalled such a synchronisation between  the Kodo drummers from Japan who had performed in London the year before.

The 3-star menu begins… with fish

Then on to the meat…

And finally the dessert…

Retiring to the Living Room

We returned to the Living Room for some more delights and a few surprises..

Touches that mattered at Frantzén

Frantzén is part of the Frantzén Group. Co-owner Jeanette Mix is also the founder and CEO of Ett Hem hotel. In Stockholm, the group has also opened Bobergs Matsal and Brasserie Astoria.

Discover where else to eat in Stockholm.