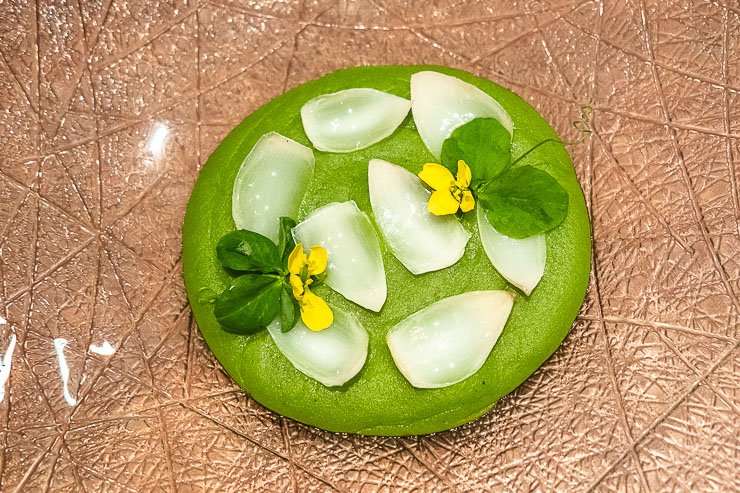 05 May Fu He Hui: a vegetarian temple in Shanghai

The Chinese characters for Fu He Hui, Shanghai’s one Michelin-starred temple to vegetarian food, represent Fortune, Harmony and Wisdom. What more do you need in life!

This discrete restaurant stretches across three floors. The building overlooks a tree-lined street near Jiangsu Road metro station. This part of town is in the French Concession, the former French settlement now referred to as ‘the Concession’.

A Zen approach to booking

Fu He Hui has no website and no email address for booking. Only a phone number. I asked a Mandarin-speaking friend living in Shanghai to book for me by phone. “Ah you don’t need to book,” he said. “Shanghai is a village.”

A village! Shanghai is the world’s largest city, with over 25 million people. But for the latte-drinking Shanghainese, the city is a village, as they don’t go outside the Concession much – maybe just to the ‘commercial’ district, towards The Bund and the more arty ones to the West Bund.

Not being Zen enough myself, I didn’t want to chance fate. I rang Fu He Hui from London to find that the person who picked up the phone spoke perfect English. Reservation made. At least I had one less worry in the world.

One stop from Jing’An Temple

Buddhism is alive in China … it just doesn’t run the country. It also has strong influences from Taoism, but more about that later.

All three are named after their street number. No 4s, I noticed – four is an unlucky number according to Chinese numerology. They are all in the same district.

Having arrived at Fu He Hui, I checked in at the reception – like a hotel – went up in the modern lift, and was then ushered into a big room with dark wood panelling, low lights, with no windows and two long wooden tables.

Artworks are placed to display them at their best … screens, vases, tables. They are, I read later, from the Ming dynasty (1368 –1644 … the last Han Chinese dynasty, with the Han Chinese being the dominant Chinese in China) and the Qing dynasty (1644 – 1912 … the imperial clan of Manchu emperors).

The whole setting was about earthing you into a sense of grounded, meditative preparation for the carefully prepared food, designed to bring out the essences of each ingredient, with little if no oil and little salt.

I sat at one table, surrounded by five wooden chairs with horse-shoe shape arms typical of the Ming dynasty – the golden age of furniture design in China. Yet I did not feel alone or awkward.

A couple sat at the other table, but they were so far away I could not ‘feel’ their presence. My amazing maître d’ introduced himself: he spoke English as if I were royalty, and patiently explained and translated, writing in my notebook, and always with a genuine, courteous smile.

Now and again, one of the waiting staff came in, dressed in discrete black, to pour the tea, mix the rice… like extras playing their part in a spectacle, a ceremony.

Turning to my book, 101 Stories for Foreigners to Understand Chinese People, Yi and Bryan Ellis explain: “It is very common in China for families and groups of people to eat in private rooms, so that they are not bothered by other diners.”

This makes sense. Why be in a crowded restaurant – which in Europe we call ‘atmosphere’ – when in fact the whole idea is to spend time with a specific group of people, or to be alone.

Music made in heaven

The music took me into a trance-like heaven. It was as calming as the ‘mountain river water sounds’ that I listen to on YouTube and a hundred times more celestial.

I only have the Chinese characters for the musician, who plucks and scrapes the strings of the instrument he is playing with a majestic twang.  I sense that so much of the rich essence of Chinese culture remains hidden in Chinese characters.

The Indian monk Bodhidharma brought Cha’n Buddhism to China in the 5th century. It then spread to Japan as Zen Buddhism.

Cha’n Buddhism is about living in the here and the now, and achieving spiritual awakening through meditation – about feeling and finding the meaning of life directly, rather than through logical thought and language.

The ancient philosophical and religious traditions of Taoism, which has been around in China since the 4th century BCE, is the influence behind most Buddhism in China.

Taoism is more about living in harmony with nature, and being on a path … think Tai Chi, Qijong, Feng Shui.

The whole setting of Fu He Hui is about being earthed  into a sense of grounded, meditative preparation for the carefully prepared food, designed to bring out the essences of each ingredient, with little if no oil and little salt.

All sorts of legends surround the spiritual roots of tea drinking. The French Art of Tea by Mariage Frères refers to Bodhidharma, the founder of Ch’an Buddhism, who chewing leaves from an unknown tree – a tea tree – which then gave him the zap to finish his vow to meditate for seven years without falling asleep.

I had read reports of 20gr of tea from Chinese Wuyi tea being sold for 24 ounces of gold, so that for me justified the price.

Finally, to what I ate… each course is named after a key ingredient. Fu He Hui is all about the ingredients.

After a few amuse-bouches (below left) and an Oolong tea from Taiwan (below middle) was served, came the first course – WHITE ASPARAGUS (below right) with yacon (the root of a type of perennial daisy originally found in the Andes and which tastes a bit like pear), lime, lemongrass & chilli.

The next tea was Longjing tea, or Dragon Well tea, as it is translated, with jasmin. Longjing tea is a pan roasted green tea from Hangzhou, a high-speed train ride away from Shanghai, and also home to Alibaba – the Amazon and more of China.

Here, I was presented with a tray of cups of different colours, with different hues of pink, and I was asked to choose which one. My most difficult choice for the whole week. The porcelain came from Jingdezhen, in Jiangxi province, west of Shanghai, where they have been making pottery since the sixth century.

Next came TOFU: bean curd sheets in soybean milk and fermented tofu… once you’ve eaten sheets of bean curd, you never want to go back to the chunks. The sheet is the skin that forms when the soy milk is boiled. The Chinese have eaten tofu sheets since the 16th century.

Lots of mushrooms at Fu He Hui

SNOW FUNGUS (bottom left): also known as white fungus, and which grows on tree, was served in a ‘soup’ of shepherd’s purse, a member of the mustard family – seen by many as a weed, and which I find in my garden!

PORCINI (middle): porcini mushrooms with soy and choy sum – a leafy green that is a member of the mustard family.

BAMBOO SHOOT (right): served in a bamboo leaf on a bed of sea salt, with black truffle – from Italy! Only the best will do here.

Then came the yellow tea, the rarest of all tea types, and the height of my tea experience.

Yellow teas, traditionally made as gifts for emperors, are processed like green teas. Then the last step is to wrap the tea in paper and gently warm it. This softens the flavours, replacing any vegetal taste with a mellow sweetness.

Dongbei rice + the ‘truffle of Asia’

MATSUTAKE: clay-pot rice, fried shallots, hazelnuts – mixed at the table. Matsutake is called the truffle of Asia. The short round pearly rice was from Dongbei, formerly Manchuria, and which stretches up from Beijing to Siberia.

Dessert at Fu He Hui

An iced tea from Hubei…

I finished with a few small sweet things based on the likes of green apple and red beans.

This was the highlight of my trip to Shanghai – a ‘money-can’t-buy’ experience… the tastes, the feast for the eyes, the stories, the sounds, the contact, the history, the beauty… all taking place in a very unique ‘sphere’… no wonder they like private dining in China, as the one thing you cannot control is who else is in the dining room with you.

As for the price, well everything as an opportunity cost… I often stay in youth hostels, and then I go and eat in the best restaurants in town.

For tips on travelling in Shanghai. For my other blog posts on China.