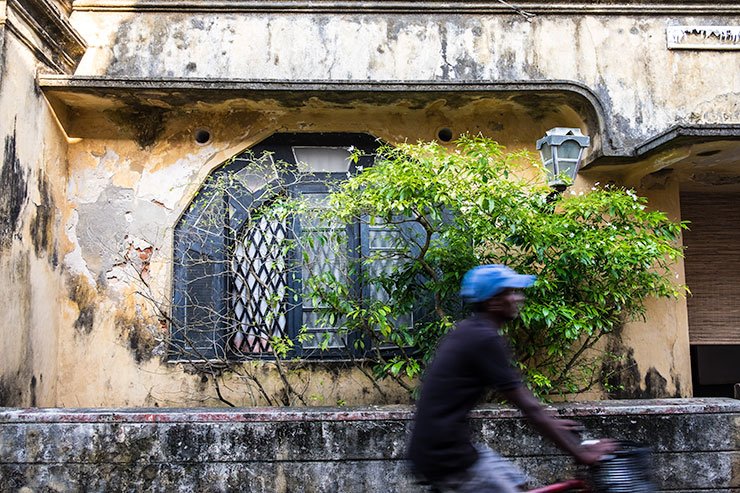 The Sri Lankan town of Galle is very popular with the boho-chic set of London’s Notting Hill and its cricket ground was destroyed by the 1998 tsunami.

These were the two things that I knew about Galle when I arrived there just after New Year.

I was still swooning following my 9-day holistic retreat at the Sen Wellness Sanctuary in Rekawa, two hours’ drive further along the coast, with the two hours sometimes extending to four, given the traffic.

Galle was to be my stop-over to help me adjust back to the real world, having come from the one of chanting, meditating, holding poses with names such as the ‘Puppy Stretch’ and an Ayurvedic diet.

Cricket was the first thing I saw on arriving in the town. The newly built ground is across from the entrance to the historic Galle Fort, built by the Dutch and now a UNESCO World Heritage Site.

I crossed the road to take a peep through the oleander bushes. The taxi driver had told me that the match was against an English team. But I didn’t stay long. Luckily, my time in Galle was more exciting.

Galle Fort is beaten on both sides by the Indian Ocean. Its ramparts are ideal for watching the sunrise and the sunset, while its history is rooted in the spice trade of old.  First, the Arab traders arrived, then the Portuguese.

The Dutch started the cultivation of the native cinnamon plant. They were followed by the British, who introduced tea & cricket. Initially the British had grown coffee, but coffee is now seen as a medicinal drink.

Galle is located 4 hours from Colombo’s international airport, on the south-western tip of Sri Lanka’s 830-mile coastline. Many tourists that I met had skipped Colombo altogether, & arrived in Galle straight from the airport.

Where to stay in Galle

Decide whether you want to stay a) in the criss-cross streets in the old town, b) in the hills overlooking the Fort, or c) in the region around Galle.

Overlooking Galle, a short tuk-tuk away from the Fort, The Sun House was once owned by a Scottish spice merchant. My God, I bet he had a good life there!

There are only 7 rooms &, like so much of Sri Lanka, the hotel is still full of colonial charm. I went there for a cocktail at Dick’s Bar followed by dinner on the terrace overlooking the frangipani garden leading to the swimming pool. Very pleasant.

Across the road, for those looking for more intimacy, is The Dutch House, with four suites, more space, with a large tropical garden, an infinity pool & croquet lawn. Together with The Sun House, it is owned by Geoffrey Dobbs, the founder of the Galle Literary Festival, held this year in Kandy & Jaffna, as well as Galle.

For those looking for a ‘simpler’ option, Kikili House, owned by Henri, a very stylish boho-chic Englishwoman, & Kokila, her Sri Lankan husband, is a true home-from-home.

For breakfast, Thushara the cook makes hoppers, a kind of small pancake made out of fermented rice & coconut milk, & Harshana the tuk-tuk driver is on hand to drive you around.

The Fort area – which can be ‘done’ in a day – can be a bit frenetic. One of my yoga retreat friends stayed at 42 Lighthouse Street, so discrete that there’s not even a sign on the outside. She raved about it. I managed to pop my head in and it did look what I call luxurious.

And then there’s Amangalla, the Aman Resort, set on the edge of the Fort, in the former Dutch Governor’s house, slightly away from the hurly burly. This is THE hotel to stay in when in Galle.

Amangalla is a great place for afternoon tea. High ceilings, excellent service, colonial style & comfort, a feeling of spaciousness, & a tiled floor that reminded me of the Victorian house where I live in London.

I went twice to Amangalla, both times to refresh myself with a cup of tea and to a escape the afternoon heat. First was a Ceylon tea and then I returned for a cup of Virgin White Tea  – said to have the highest level of antioxidants of any tea – from the nearby Handunugoda Estate. “If you’re happy, I’m happy,” said the waiter. I also liked that.

For lunch,  I thoroughly enjoyed KK the Collection, where the focus was on doing a few Sri Lankan dishes with really fresh ingredients. I went for Kottu: roti cut into strips and mixed with vegetables & a bit of egg – perfect for if you have a large evening meal on the horizon!

Next door is Punnie’s Kitchen, an organic restaurant, which was closed for a private venue. Like KK Collection, the restaurant is located within a courtyard within a shop. 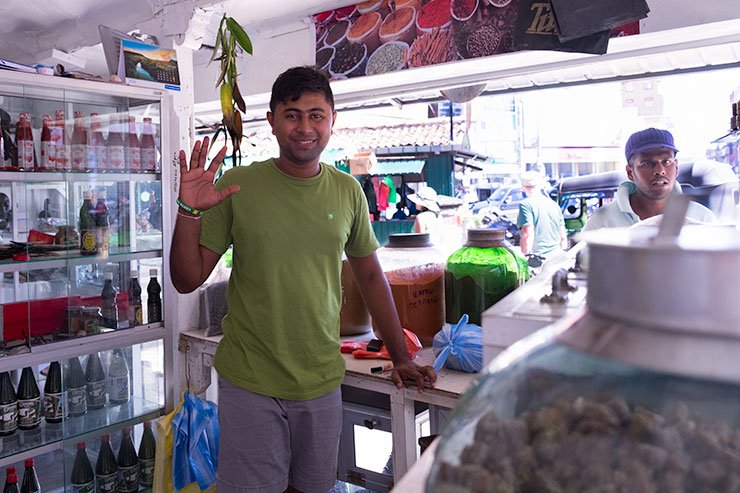 My best eating experience, was not in Galle but at Kahanda Kanda (KK) Boutique Hotel owned by British interior designer George Cooper, also the name behind KK the Collection store,which opened in Galle last year.

After a 40-minute drive along the coastal road & then inland, through the tropical forests, plantations & rice fields, I arrived for dinner at KK Villa Resorts just after sunset. The trick is to arrive before, but I got it wrong.

I could just make out the view across the plantation & down to Lake Koggal, offering an expanse & tranquility hard to find in the built up coastal areas around Galle.

The tropical rains then descended & I took refuge in the ‘Living’ Pavilion. I stretched out on a banquette, & ordered the signature KK Cocktail, listening to the sound of the down pour. Love it! Cocktails are tropical by nature, & there’s no better place to have a cocktail than in the tropics.

Then I moved to the terrace of the Dining Pavilion, with its open sides &  the magical view. Yes, it was dark by then, but you could feel the expanse across the hills & the lushness of the tropical landscape. I could have sat there all night.

All fruit, vegetables & herbs are grown on the estate, & the food is fusion, with a strong Sri Lankan & Thai influence. I had Soba Noodle Salad with Aubergine & Mango for starters, followed by Fish Tagin with Couscous Salad & Vegetables, & Homemade Ice Cream & Sorbet.

Its 10 suites, 3 with their own swimming pools, are popular with honeymooners, but that evening there was a mix of couples, family groups & groups of friends, Europeans and a few Australians.

Now I remembered a George Cooper from growing up in the New Forest … & when the man himself came to say hello, it turned out to be the one & only. As a teenager he was very cool & stylish; and I was only aspiring to be. We sat and talked, and exchanged names of people that we remembered – people we had not seen for decades.

Dinner at KK Boutique Hotel was definitely worth the Rp2,000 (€27) taxi ride there and the Rp1,500 tuk-tuk back, & the Rp6,400 (€85) for 2 cocktails & the 3-course meal. Arriving by taxi kept my curls  in place, while returning by tuk-tuk meant I arrived back at the hotel slightly windswept.

And then it was time to take the train to Colombo; a journey of a couple of hours and which cost little over an euro, or less than a pound. Still, most tourists I met prefer to take a car; I’d prefer to spend the money on a good restaurant.