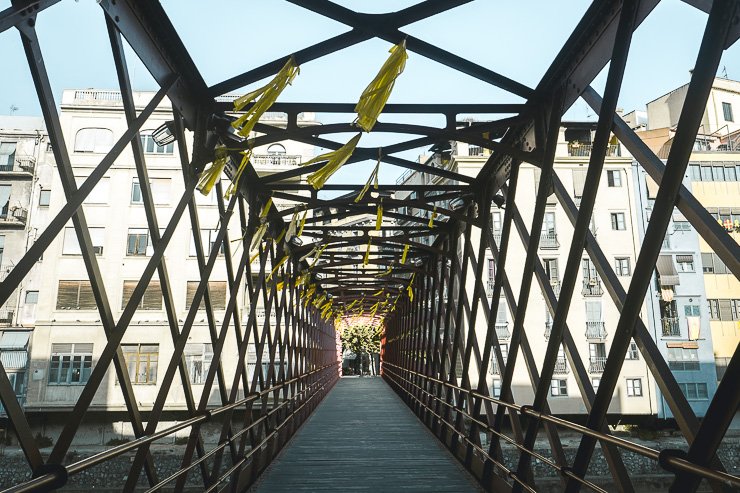 Girona once served as a passageway for the Romans on their way through ‘Hispania’. Fast forward a couple of thousand years and the city is a passageway for a different kind of visitor: the food-loving and lycra-wearing cyclist on holiday.

For me cycling is a way of getting from A to B. Girona is a destination for more serious guys… especially those heading towards the foothills of the Pyrenees.

I got chatting to a group of them outside my hotel, as I went to pick up my car from the parking to drive to Les Cols Restaurant in Olot; they joked that they were faster than me in my car… I am sure they (almost) were, such was their verve.

Before I write about men and women in lycra, let me go back to my arrival in Girona. I came straight from Girona’s international albeit small airport, left my luggage at my hotel, Hotel Nord 1901, and went straight out to discover the city. Everywhere I came across yellow ribbons… tied to bridges, to street lamps and to posts.

Yellow is a cheery colour. The ribbons were – I found out – symbols of solidarity with the nine Catalan separatist leaders held in prison for organising an independence referendum back in October 2017.

I observed; assimilated; and refrained from judging. As I wrote in my post on Silo Restaurant in Brighton, “at the end of the day it is all about respect… respect for yourself, for others (and for the environment)”.

So that is probably why the artistic whim in me has encouraged me to lower the vibrance and up the yellows in my photos of the right bank of the river Onyar in Girona – the pedestrianised medieval district of the city centre… with my first post on Girona on the left bank, the 19th century district.

For those with a phobia of MAMILs (middle-aged men in lycra), Girona is the place to go to reconcile yourself with your judgments. In September the town was full of MAMILs and a few MAWILs (women) and YPILs (young people). The MAMILs in Girona were pleasant,  respectful, dedicated; they were on holiday, and I did not see one of them jump a red light, like they do in London.

I hung out in a few of the cyclists’ corners as they were fun, good and vibrant. First on the list…

La Fabrica is an institution for visiting cyclists. It also offers some of the best coffee in Girona, a good breakfast and a good lunch. The café was set up by once-professional cyclist Christian Meier, from Canada, and his wife Amber. They also own Espresso Mafia round the corner, which doubles as the roastery.

Christian and Amber are pretty powerful people in Girona. They also run Service Course, which offers everything a cyclist might need, from massages to day trips and longer tours (including a gastro tour), to gear, kit and a newsy website. Service Course was by chance opposite my hotel, Hotel Nord 1901.

I could quite happily – if I were an ardent cyclist – live between La Fabrica, Espresso Mafia, Service Course and Hotel Nord 1901, and I would throw in Restaurant Maran and El Brots de Vi for evening meals (read on).

On the road to food

I had learnt from Girona Food Tours that many of the names of square referred to food and wine. This harked back to the days when local inhabitants could not read. So, the Plaça del Vi was given its name as that was where wine was sold. There is also the Plaça de les Castanyes (chestnuts) and the Plaça de l’Oli (oil).

When I check out a town as a food destination, one of the first things I do is to check out the quality of the bakeries. Casa Moner was a winner, as was Antiga Casa Bellsolà, in the image below. Both use natural yeast.

The importance of bread locally is symbolised by bread being a recurrent theme among the prolific artworks of Salvador Dali, who was born in nearby Figueres. The logo for Girona’s Artesenal Breadmaker’s Association is a design by Dali.

Apart from Restaurant Maran, my other favourite for eating in the evening was Brots de Vi. Here, I had some great natural wine – Cabaret Sauvignon from Casa Pardet in the neighbouring province of Lleida – a tasty beefburger made from Girona veal (famous across Spain), real potato chips and a great salad.  It’s in the same street as Espress Mafia Café, in Carrer de la Cort Reial.

A partial regret was that I had not watched Session 6 of Game of Thrones, filmed in Girona. A Game of Thrones Walking Tour – and they do exist – for next time? I don’t think so.

Want to work off all that eating? Take a stroll along the top of the city’s fortified, medieval walls. Allow around an hour.