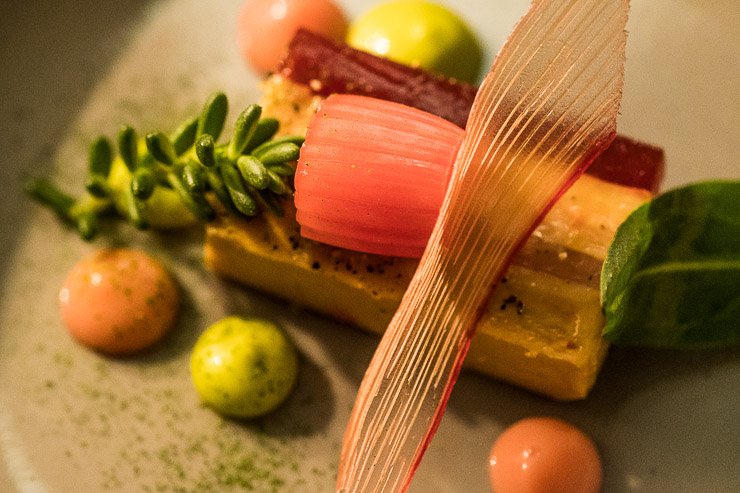 I went to Frenchie Covent Garden to celebrate the 3rd Goût de France Festival ‘Frenchie’ style. In English, the Festival is called Good France, but I like to think that in Europe at least ‘Goût de France’ is understood by everyone. When it comes to food or love, words sound so much better in French.

That evening, on 21 March, the second day of spring (in the northern hemisphere), more than 2,000 chefs around the world were cooking for France. We were all paying homage to a cuisine that is only one of two (with Mexican) listed by UNESCO as part of our world heritage.

UNESCO singled out French gastronomy as a “social custom aimed at celebrating the most important moments in the lives of individuals and groups”. So that explains why Greg Marchand, the chef & name behind Frenchie, said that his favourite ‘dish’ was “Sunday lunch with his wife and two children with roast chicken“.  Note, the food comes last.

A fellow Frenchman had to explain to me that it was not likely to be any old roast chicken, and that for him roast chicken was a chicken that had been lovingly rubbed with unsalted butter, sprinkled with a bit of lemon and is served with chips… chips with mustard, above all.

Greg used to be Head Chef at Jamie Oliver’s Fifteen, where Jamie, being a good salt-of-the-earth man, would call him ‘Frenchie’.  In London, Greg has also worked at the Savoy Grill, the Mandarin Oriental and the Electric, and in New York at Gramercy Tavern, as well as in a few other cities and countries around the world.

This was all before opening Frenchie in Paris’ Rue de Nil in 2009. Other Frenchies were then spawned… Frenchie Wine Bar, Frenchie To Go, all in the same narrow street in the 2nd arrondissement of Paris, and then Frenchie Covent Garden just over a year ago.

Restaurant of the Year Award

Earlier this year, Frenchie Covent Garden won the BMW Squaremeal Award for Best Restaurant of the Year. Congratulations!  Asked what was behind his success, Greg replied to The Standard that in London it’s not enough to serve delicious food; it’s about understanding your customers, and speaking their language. Jamie had obviously taught him well.

Apart from a love for sitting round a table with friends and family, why is French cuisine so renowned? I would say, most importantly, that it’s about the French passion for craftsmanship – only rivalled by the Japanese.

Others add that it’s because of the huge range and quality of produce available. And that it’s to do with French culinary history. Figureheads in this history include, to name a few:

If anyone had been expecting frogs’ legs or snails for the Goût de France celebrations at Frenchie Covent Garden, they would have been in for a surprise. Frenchie is about ‘New Bistro’ cooking. The word ‘bistro’ is thought to have come from the Russian cossacks who occupied Paris in 1814, and who demanded quicker service by shouting ‘bystro!’ which means ‘quick’ in Russian.

New Bistro cooking, from my experience at Frenchie’s, is about food cooked with respect for the produce and the seasons, with innovation and passion; a relaxed, informal environment, where you can prop up the bar or sit at the table, and take one course or five; all with no slack in attention paid to every detail.

There’s also something else. We were eating a meal symbolising the ‘taste’ of France, yet the soul of New Bistro cooking meant that the fish came from Scotland and the rhubarb from Yorkshire. There was a respect for where we were, London, and that those eating were from Britain or visiting Britain, or were ‘honorary’ Brits. There was a sense of place.

This new generation of chefs are global. Many having travelled around the world, adding extra layers of knowledge about techniques and ingredients to their sound base of classic French cuisine. It was in New York, for example, that Greg picked up his love for smoking (food, not cigarettes).

We are a sum of our past experiences, and these French chefs have some interesting pasts, which is reflected in the way they cook.

Enough! This was what we ate and drank…

An aperitif of pisco with sherry & rhubarb syrup topped with a purple viola… a perfect combination.

The entrée was Duck Foie Gras with Yorkshire Rhubarb, Sorrel & Lovage, as in the featured image.

As suggested by the excellent sommelier, I went on to a white wine, a skin-fermented Vermentino, Hocus Pocus, produced by Fabienne Völlmy at Microcosmos, an urban winery in Marseille.

Then we moved on to (Scottish) Smoked Arctic Char à la Parisienne. Artic char before is a fatty fish, so ideal for smoking.

A la Parisienne signified that the fish was glazed with a mix of seaweeds (including kombu) and wild garlic, and served with asparagus & smoked herring roe, with dabs of smoked yoghurt, miso and Sicilian bergamot. This sounds like the cultural mix that is Paris to me.

Then came Elwy Valley Welsh Lamb, Spiky Artichoke & Goat’s Curd. This surely must be the best lamb ever.

To go with the lamb, I switched to a glass of Terre des Chardons Bien Luné, a biodynamic Costières de Nîmes, a Syrah/Grenache blend.

And then the dessert… Meyer Lemon, Rosemary & Kalamata Olives. A Meyer Lemon is a cross between a lemon & an orange or mandarin.

The Menus at Frenchie

This was the tasting menu, at £55. For me it was worth every penny. When I eat out, I want to be excited and inspired by the food, the wine and the service… which I definitely was that evening. At lunchtime, there is also a very good value 3-course menu for £29 and two courses for £22.

And I just have to go back to Frenchie Covent Garden to sample the legendary bacon scones served with maple syrup and seasoned Cornish clotted cream. That’s what New Bistro cooking is about. Vive la France!

You may also be interested in my post on Behind the scenes at Frenchie Covent Garden as part of a photography course with the London Institute of Photography.