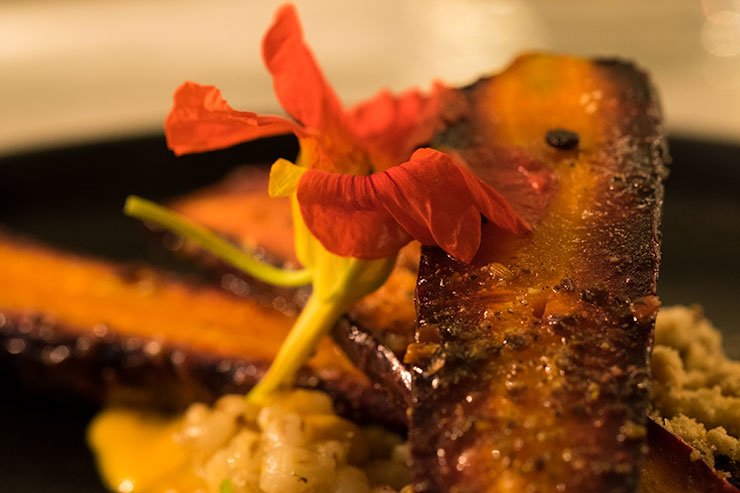 Love food, love wine, love music. I found it all at Frenchie Covent Garden, the first restaurant outside Paris of Gregory ‘Frenchie’ Marchand.  I also love sitting at the bar.

When I told my cousin that Boris, her golden retriever, was my favourite dog… she gasped & said one should never have favourites as it’s not fair on the others. So I try not to have favourite restaurants.

A few weeks ago the skies looked greyer than normal & the sun lower in the sky, so I thought to hell with everything & headed to Frenchie Covent Garden.

Now Frenchie Covent Garden, which opened in February, was so new that no menu featured on their website. Oh, I love surprises, especially from a chef such as Gregory Marchand, aka Frenchie … his nick name when he worked for Jamie Oliver’s Fifteen restaurant … he’s also worked at Gramercy Tavern in New York, as well as in Spain & Australia.

Three years ago I’d visited the Rue du Nil in Paris, home to the original Frenchie, which opened in 2009, & now joined by Frenchie Bar a Vins and Frenchie To Go. I had already eaten, at nearby Restaurant Saturne, but curiosity got the better of me to see what everyone was talking about in Paris.

The Frenchie vibe is rhythmic, colourful, fun, with an engrained sense of style … the perfect place for tossing away the blues.  And the set menu is adapted daily.

Now, I like to eat at the bar, whether alone or in the company of one or 2. It’s the perfect place for turning your back on the world & embracing the ‘experience’. I also like to eat late, which meant that I (nearly) had the whole bar to myself when I visited Frenchie Covent Garden.

What I ate at Frenchie

The daily menu offers 3 choices for each course, at £28 for 3 courses or £22 for two. With a 12.5% service charge, I still found the experience worth every penny.

Don’t ask me about the music … but at least I’ve now downloaded Shazam, so I’m already for my next visit.

Cocktail: personalised for me!

A mix of vodka, St-Germain elderflower liqueur, a touch of lemon, egg white & a purple viola for a dash of colour.

Pictured above. Vadouvan is a French-style blend of Asian spices thought to have originated from the Indian colonial city of Pondicherry, where my great-grandmother used to live.

Wine: Le Soula, Roussillon 2009 – a blend of Macabeu & Grenache, & a perfect combination, … the sommelier had joined from Michelin-starred restaurant Hibiscus, so I knew I was in good hands.

I love rabbit, but only wild rabbit… a very underestimated meat. Here it was beautifully done with  homemade pappardelle, plus a touch of sweetness and then Espellette, the Basque red pepper, to spice it up. Later I went down to the kitchen to see them making the pasta.

Too interesting to miss. Given that I have no sense of smell, the blend of bitterness, saltiness, sugar & the smokiness of the bacon gave me a real ‘ah, ah’ moment of joy.  The fattiness of the bacon added depth & roundness of taste to the ice cream, & the pastry was perfection.

Read about my behind-the-scene photo shoot of the Frenchie kitchen. The kitchen is downstairs, and this is where the real fun starts .… this is where you can experience the tasting menu with a view over the kitchen.

How many times do you have people round for dinner & everyone congregates in the kitchen? Kitchens are warm, intimate places that make you feel good… I must go back to this one.