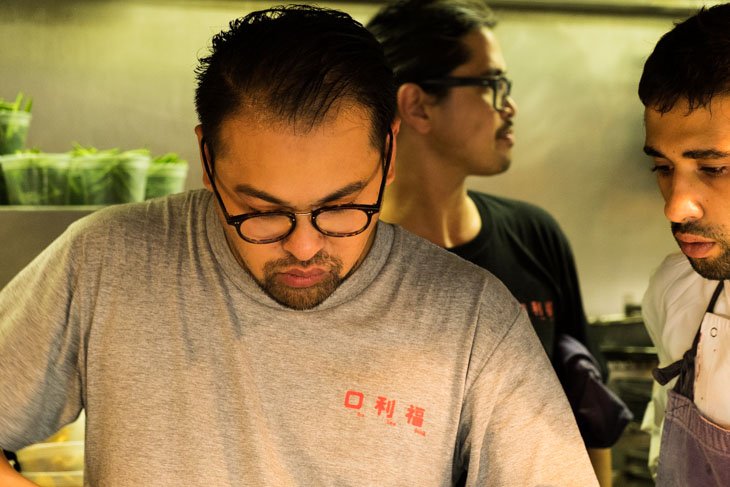 This Tuesday’s new moon in Leo heralded the perfect time to shine and to roar like a lion. I did my roaring at Lyle’s, where I sampled the 9-course menu of guest chef Jowett Yu of Ho Lee Fook, currently one of Hong Kong’s most talked-about ‘fun’ dining venues.

Lyle’s is a British restaurant in London’s Shoreditch district with James Lowe as head chef. The restaurant’s Guest Series has seen some of the world’s top chefs fly in for a few days to excite the palettes of London foodies.

As part of The Guest Series, I’d already enjoyed an evening sampling the delights of André Chiang, of Restaurant André in Singapore, & now it was the turn of a Hong Kong approach.

Like Chiang, Yu was born in Taiwan. Whereas Chiang went to Japan, Yu went to Canada when he was 10 years old. In 2005, he moved to Australia working at Tetsuya before conquering the food scene with Mr Wong and Ms G’s Asian. He moved to Hong Kong in 2014 to open Ho Lee Fook.

Like with many top chefs, Yu is imbued with childhood memories of food, making dumplings with his mother and visiting his grandparents on their rice farm, where his grandmother would cook on two giant woks over a wood fire.

Ho Lee Fook in Hong Kong looks to blend the vibe of the cha chaan teng tea cafes of Hong Kong with the hangouts of New York’s Chinatown in the 1960s. The name translates from Cantonese as ‘good fortune for your mouth’… and the good fortune that we ate on Tuesday was pretty awesome.

In London, there were no gold-plated cats raising their right paws, but there was the music, chosen by Jowett Yu himself, to create the ‘fun’ atmosphere. It was rock; I think. The Clash, Queen? I’m a music lover rather than an expert. But the music provided the right vibe to get all our table laughing and chatting away together.

Tradition with a modern twist

The food is traditional Chinese with a modern twist. A couple of the Hong Kong-born people on my table joked there was no rice. Chinese food needed to be eaten with rice, they said. But I certainly revelled in the strong tastes which I preferred to dilute with a sip of wine, a Gewürztraminer followed by a Savagnin, rather than a spoon of rice. And neither is this pure Chinese food – it’s food crafted by Jewett Yu.

In true Chinese style, the 9 dishes were shared among the 9 people on our table – the number 9 signifies ‘everlasting’ in Chinese numerology. The sharing philosophy was perfect for a fun evening with people that I’d never met before – united by food , natural wine & laughter.

The first 3 dishes were …

The Venison Tartare was the tastiest tartare ever; the okonomiyaki took me back to the street food of Dotonbori in the Japanese port city of Osaka; and I learnt that XO does not stand for ‘kisses & hugs’ but a spicy seafood sauce popular in Hong Kong.

My first glass of wine was an Alsatian Gewürztraminer ….

Meanwhile, the music put us all in the vibe. Each guest chef at Lyle’s chooses their own music. Don’t ask me for any names of songs, but the music was definitely good. I was too busy focussing on my food & chatting with my neighbours.

The whelks proved a bit of a challenge. They were BIG whelks. I just ate the ends, dipped in the wine sauce. The egg white custard with the crab, sweetened with Shaoxing (fermented Chinese rice wine), was divine, and the green beans, girolles & tofu were a  nice palette cleanser before the meat dish arrived.

It was here that I moved on to another wine perfect for drinking with spicy Asian food, the Fleur de Savagnin from the Domaine de la Tournelle in the Jura. This is the white Savagnin grape that goes to make the famous vin jaune of the Jura, while its pink version, Savagnin Rose Aromatique, is otherwise known as Gewürztraminer.

The Dexter, from Ireland, is the smallest breed of cow in Europe. It’s half the size of the Hereford. Cows in the days long gone by were always small. It’s only modern breeding methods that have made them big. I learnt that from my cousin who used to breed miniature cows.

The pudding course was ‘Breakfast 2.0’, another feature from the Ho Lee Fook menu in Hong Kong. Horlicks ice cream, Honey Joys (cornflakes with a honey/butter mixture), oats, fruits and cocoa coffee crumbs.  This, for me, was simple comfort food  – a perfect ending.

More than three years later I ate at Canton Disco in Shanghai, opened by Jowitt in The Shanghai EDITION. And, yes, I had a good time!