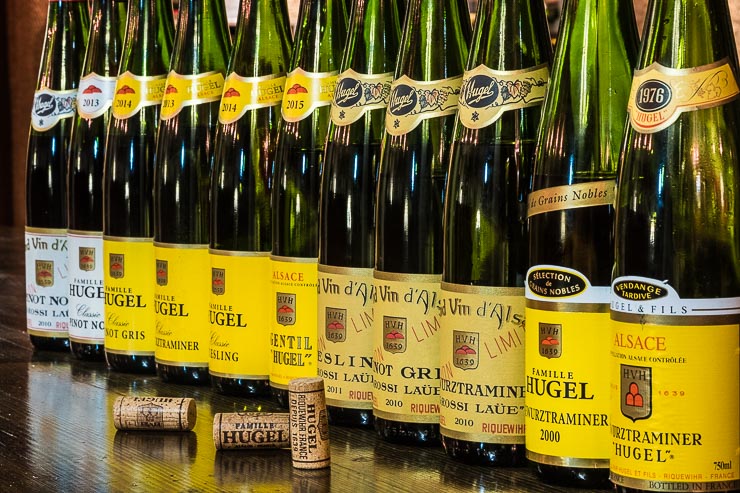 Riquewihr is one of the most picturesque towns in France. We walked through the medieval arch, along the cobbled streets, and into a half-timbered house, home of Famille Hugel, one of Alsace’s oldest wine families.

The cast-iron sign above the door was in the classic Alsatian folklore style of Hansi, a local artist who witnessed the end of the 19th and the first half of the 20th century, when Alsace yo-yoed between France and Germany.

Yes, I loved the fairy-tale feel, the bright colours and the gurgling fountain – it was too early in the year for the window boxes full of geraniums. But it was the wines that I really remembered and the warm welcome given by Famille Hugel on my 3-day tour of Alsace with Clos Driver Wine Tours.

Hans Ulrich Hugel, a Swiss refugee from the Thirty Years’ War, founded the domaine in 1639. Since then 13 generations have been making wine on the domaine. We met the 13th, Jean Frédéric Hugel.

Hugel is one of the big names in Alsace. 90% of their wine is exported to more than 100 countries. The walls of the tasting room are lined with Hugel adverts featuring famous figures from the wine world as well as a personal letter of thanks and appreciation written by Winston Churchill.

The wine labels are a characteristic yellow, with some red and a hint of gold, Jean Frédéric’s great-grandfather worked in Berlin for the Maggi brand of condiments, where he learnt that these were the colours that stood out on the shelf… and they’ve been like that ever since.

Famille Hugel offers 3 ranges of wine: the basic Classic range, made from grapes grown on the 30-hectare domaine and brought in from a further 100 hectares farmed by partner growers; the Estate range for more serious drinking; & its top range, Grossi Laüe, which means ‘finest vineyards’ in Alsatian dialect.

They use the classic grape varieties of Alsace: Gewürtztraminer, Riesling, Pinot Gris, Pinot Blanc, Muscat and the red Pinot Noir. All the wines are single variety, apart from Gentil Hugel, which also has a bit of Sylvaner.

I asked Jean Frédéric why Alsatian wines go so well with food. The salinity of the wines, he replied. This comes from the dry, semi-continental climate, with fresh nights due to the northerly latitude and the Indian Summers, giving dry, well-balanced wines.

Nearly half of the Famille Hugel vineyards are Grands Crus. These are vineyards officially classified as the best. But you won’t find the Grand Cru name on the bottle.

Hugel’s very top wine is Schoelhammer, launched in 2015, with only 30 rows of vines, on the marl slopes of the Grand Cru of Schoenenburg.

Jean Frédéric said that every time they go out in the vineyards they come across fossils. This is because the region is at the point where two faults meet. It took him 10 seconds to find me a fossilised oyster. These 2 fossils are now sitting in the dish next to the cooker where I keep my garlic and a few seashells.

The Schoelhammer vineyard overlooks Riquewihr, with its church spires & pointed roofs against the backdrop of the Vosges mountains. 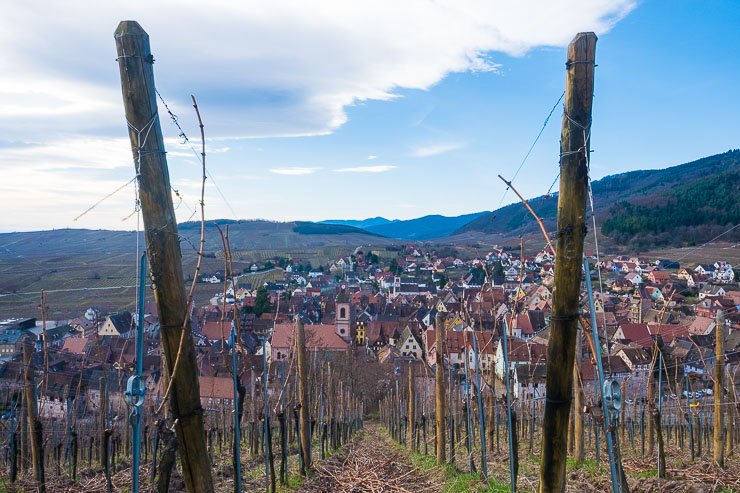 The origins of Gewürztraminer

The Hugel family were among the first to cross the Traminer grape variety from Italy with the Gewürtz (translated as ‘spicy’) from Germany to produce Gewürztraminer, which together with Riesling, is the best known grape variety in Alsace.

Gewürtztraminer is one of the easiest whites to recognise. As the Oxford Companion to Wine says: “Gewürtztraminer’s faults are only of having too much of everything.”

It is the perfect accompaniment to anything spicy, and to the strong local Munster cows’ milk cheese. This pungent cheese is one of my favourite. When we stopped off to buy some  direct from the producer in the nearby town of Beblenheim I made sure mine were vacuum-packed.

Hugel’s top Gewürtztraminer is produced on the clay soils of Grand Cru Sporen.

Before visiting the vineyard we did some serious wine-tasting, as the featured image shows. We tried a full range of wines, including many of the Grossi Laüe.

We finished with the Vendange Tardive, the sweet Alsatian wine pioneered by Hugel and made from over-ripe grapes picked late in the season. The 1976 below was a stunner. I had thought I did not like sweet wines, but this visit to Alsace has won me over.

One up in terms of concentration, and the lateness of the harvest, is the Séléctions de Grains Nobles. This sweet wine is made from botrytised grapes affected by noble rot, a beneficial type of grey fungus. Perfect for blue cheese, foie gras or a fruit tart dessert.

Like in many of the cellars that we visited, the domaine had beautiful examples of intricately carved wine casks. The fish, together with the mermaid that we had seen at other domaines, symbolises the seductiveness of wine.

Wine does not just seduce; it also makes conversation flow. It incites passions and feelings … about the weather, the world, the vineyards, the vines, the tastings, the travel, the vintages, the people, the visits…

Here we have Jean Frédéric and Sebastien Crozatier of Clos Driver Wine Tours.

The town of Riquewihr

Riquewihr is a picture-postcard town. It was slightly touristy, even in February, but it had charm. And the cakes looked good; I restrained as we had lunch booked that day at Restaurant 64º at Hotel Chambard in nearby Kaysersberg.

End of my Alsatian chapter

Alsace is now over. I had a fabulous experience & took a big leap forward in my knowledge of wine… a never-ending adventure.

You can find my full itinerary with Clos Driver Wine Tours on my post Strasbourg: Start of a Wine Tour Adventure.