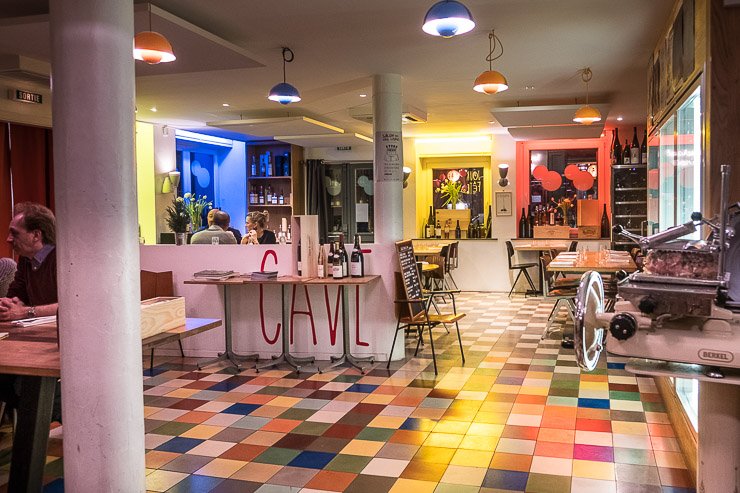 I dream of living round the corner from a restaurant where I feel at home, and where my heart would take to me every week, every day to eat, drink and be merry. I found such a place at Jour de Fête, in the Krutenau district of Strasbourg, the capital of Alsace.

UPDATE: Jour de Fête is now closed – or so it seems. Head chef Agata Felluga has upped and taken her knives with her … earlier this year she was at Lyle’s in London as part of the restaurant’s special guest series.

Could I live in Strasbourg? Yes, but. (Have you ever tried not to say ‘but’ in a conversation’? It’s a difficult game.) The ‘but’ in this case is that I would miss the sea. London has no sea, but it is close enough to feel the oceans in the wind and to watch the seagulls fly overhead.

Back to Strasbourg and Jour de Fête. The Romans referred to ‘festa’. This then became ‘feste’ in Old French. And then ‘fête‘ in Modern French. At Jour de Fête it is all about un jour, a day, of festivals & feasts, fun & frolics, albeit the frolicking when I was at Jour de Fête stayed above board.

This restaurant & wine bar came as a suggestion from wine producer Catherine Riss … who also pointed me in the direction of Au Pont Corbeau, which was closed that evening.

Not only did I find Catherine’s wines on the wine list at Jour de Fête, but also those from fellow natural wine producer Kumpf et Meyer, and champagne from David Léclapart and Vincent Laval. I know all of them through my work with Clos Driver Wine Tours.

What is natural wine, or vin nature, as they say in French? Jour de Fête describes it as a “living wine that respects the terroir”, or “un vin vivant qui respecte le terroir”. That’s good for me.

The festive colours of Strasbourg

Strasbourg is a light-hearted city. Some locals told me that this was due to its proximity to the Rhineland region of Germany, famous for its carnivals. Yes, but … here I go again… the nearby Rhine is one of Europe’s longest rivers and has for centuries been used as a corridor for transit and passers-by, which always encourages a certain openness and frolicking.

The city is colourful and unique, and so is the decor at Jour de Fête, and in my room at Hotel Graffalgar, near the station, on the other side of the cathedral from the Krutenau district. 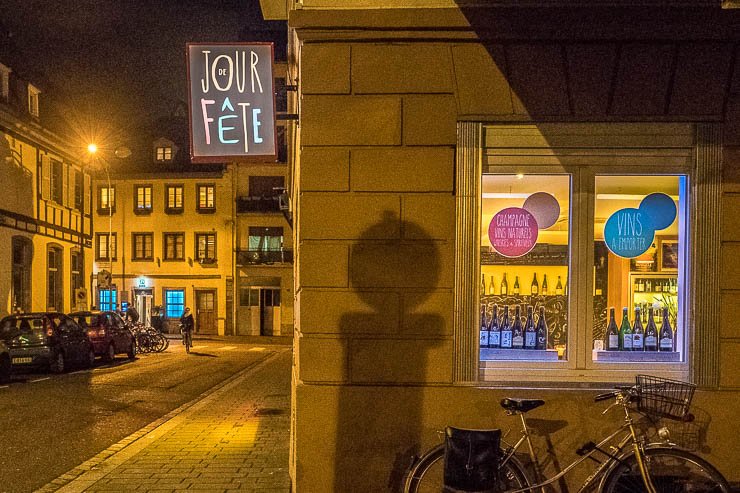 What I ate & drank at Jour de Fête

My aperitif wine was Outsider, a naturally sparkling Brut Rosé by Brendan Tracey. Brendan was born in New Jersey, to a French mother. He moved to France in 1977 and started producing wine in the Loire in 2010.  At €5 a glass, even if the pound has devalued, that is still a lot less than the €8 or so that you would pay in London.

Sitting at the bar, I struck up a conversation with the gentleman sitting next to me, who was the proud designer of one of the tables in the restaurant. And a very nice table it was. He was based in Mittelbergheim, across the Alsace Wine Route from Andlau, where we had been that morning to visit Marc Kreydenweiss. It made me feel that Alsace was small, cosy & familiar.

For my starter, I went for octopus. Having lived in Spain,  and knowing my pulpo gallego, I was reluctant, but it really was good… spiced up with green olives, orange zest & sun-dried tomatoes.

A new fish on me – sabre

Then I chose a fish dish with seaweed. The fish was sabre, a Mediterranean fish that grows up to 5ft long, with sharp rows of teeth, and flesh with the firmness of sole, but (another ‘but’) with a taste ever so slightly towards sardines.

It was excellent, especially when served with a glass of Mâcon Cruzille ‘Aragonite’, a Chardonnay by Clos des Vignes du Maynes. Hey, I thought I’d come to Alsace to taste Alsace wines, but then it’s a bad idea to be too purist… and this wine, for me, was a real find.

Lemon tart with a Vendange Tardive

I accompanied the tarte au citron with a glass of the late-harvested (the later the harvest the sweeter the wine) Vendange Tardive – Grand Cru Hengst from Domaine Josmeyer, a Pinot Gris. For all those of you who turn your nose up at sweet wine, you shouldn’t. This went perfectly with the food as well as the name … hengst means stallion in English.

In the meantime, the restaurant had filled up, and people were coming and going, to eat, to buy wine… the music played, the people laughed – they knew each other and, even if they didn’t, they welcomed each other like friends. These people, I thought, know how to live.

Read more about Strasbourg, and track the full itinerary of my Alsace wine tour with Clos Driver Wine Tours. Here are my other posts on Alsace: