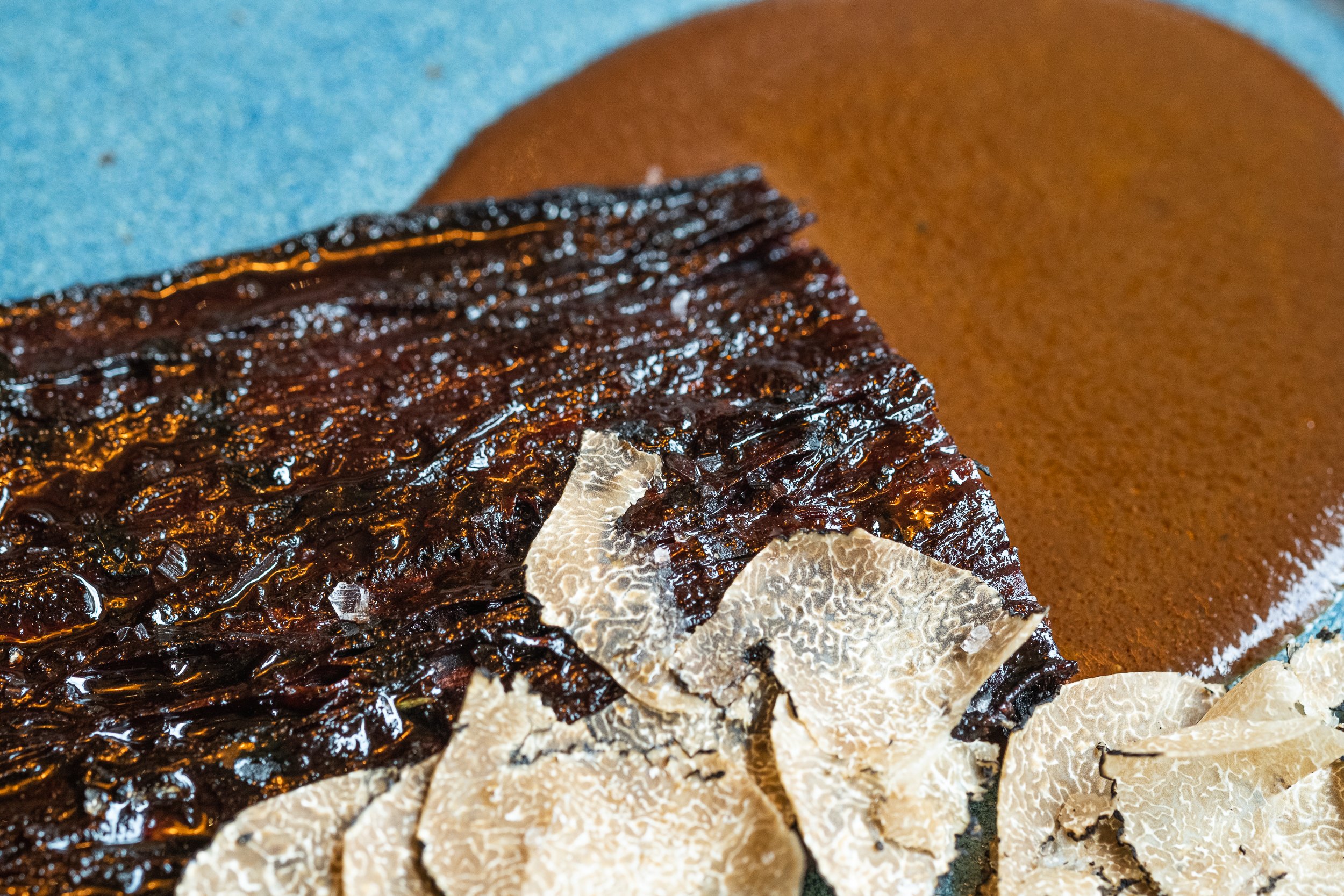 George Eastman, founder of Kodak, liked words that began with K as he thought people remembered them better. That’s why photographer Elliott Erwitt called his book Kolor, rather than ‘Color’. And maybe that was why Santiago Lastra named his restaurant Kol, the Judaeo-Spanish form of the Castilian word col, or cabbage.

An historically undervalued vegetable, the humble cabbage can be made to be special, says Santiago. “This is true of British ingredients, and it is true of Mexican culture and cuisine,” he told the Marylebone Journal.

Kol, described as having a ‘Mexican soul’ and using ‘British ingredients’, is Santiago’s first restaurant, despite his being well-known on the chefs’ circuit. In the year since Kol opened – just off London’s Portman Square – it has been named Best New Restaurant in Europe (La Liste) and Santiago Best Chef (GQ Food & Drink Awards).

I had waited a whole year after the opening to finally sit down on one of the leather chairs at one of the oak tables with a travertine top. Anticipation wets the appetite. Lockdowns, work commitments and high demand for tables foiled each attempt I had made to book. My visit this October did not disappoint.

On the day when I finally took a seat at Kol, Santiago whipped out his phone to show me a picture of a pingüino (penguin) – a mini chocolate cup cake with creamy filling which is popular for celebrating birthdays in Mexico. It’s a tradition that finds its origins north of the border.

It was my birthday that week, and a Kol pingüino was duly brought to the table, with discretion, towards the end of the meal, with a lighted candle atop. The taste was sublime, with chocolate & beetroot sponge, and a meadowsweet cream centre.

Cooking with happiness – and deep roots

Santiago, together with his team, cook to spread happiness. And you can feel it. He climbed into the spotlight after working with new Nordic cuisine supremo René Redzepi to launch the Noma Mexico pop-up back in 2017 between the jungle and the Caribbean Sea, in Tulum. As René said: Mexican cuisine – one of only two national cuisines recognised by Unesco – is “as old as time and yet so relevant. Full of ingredients I never knew existed.” (The other Unesco-honoured cuisine is French.)

Sea buckthorn replaces lemon; kombucha is a substitute for lime; and for the taste and consistency of avocado, Santiago turns to Scottish pine oil and pistachios.

The exception to fresh ingredients from Britain was the octopus, caught by Galician fishermen, and on the menu in tribute to Santiago’s Galician father.  It just so happened that I was at Kol with my son, himself half Galician. (And, no, I have not seen the film My Octopus Teacher.)

We went for the ‘Seis’ menu – a tasting menu of six dishes, rather than the ‘Cuatro’, with four. There is no à la carte, and as a table you can only choose one menu, which leads to a shared experience – much more fun.

We started with a Kol take on Chilpachole, a spicy red seafood stew from the Mexican state of Veracruz that neighbours Tabasco state, on the Atlantic coast. Kol’s version was a clear beetroot-based soup with chilli and mezcal (the fermented and distilled drink made from cooked agave hearts, or piñas.)

Then we went on to a chalupa (a bowl-shaped fried tortilla) filled with crab, and with finely chopped white enoki mushrooms and flavoured with pistachio and fermented gooseberries.

The squid was to perfection. Not like the rubbery version I had cooked at home the day before, It’s not easy to cook squid well.

Tacos have been made in Mexico since ancient times. A soft, flat, usually corn tortilla, tacos are folded in half, rather than wrapped, like the larger burrito. With lobster they are divine. Cucumber limes (marinated in kombucha) replace actual limes.

The extra course sneaked in: Mole

We only live once, so we ordered the mole supplement for an extra £25. (See main picture.) The sauce – in other words the mole – had 25 different ingredients. There is not enough sun in Britain to make cecina – the salted, dried beef found in Mexico – so instead Santiago uses purple carrots aged with fermented blackcurrant and served with shavings of truffles.

The trout was nestled under the courgette, berries and marigold leaves and flowers. Not only did the courgette look almost like avocado, but it tasted like it to, and with the same texture.

Here there was a choice between Whole Grilled Octopus (marinated in kombucha), Bone Marrow, Potato, Seaweed Macha or Confit Pork Cheek, Cabbage Leaves, Gooseberry & Pear Salsa, with Black Beans. We went for the octopus. We filled our own, still piping-hot tortillas. That’s why my ingredients are slightly off centre. I have no chance of a job at Kol.

Dessert after the pingüino: Nicoatole

Nicoatole is a dessert that dates to the ancient civilisations of Mexico. A gelatinous consistency made from ground maize and sugar, and traditional to Oaxaca state. You can find meadowsweet, a member of the rose family, in damp meadows, ditches and riverbeds in Britain. Its creamy-white flowers give an elderflower taste with almond undertones. And, yes, you can find British ricotta.

As an aperitif – my son was running late – I had ordered a Fig Leaf & Mezcal Tonic, made with Parafante Fig Leaf Liqueur. The waitress also told me that the House Margarita was popular. That’s for next time, when I want to prop up the bar in the Mezcalaria downstairs, next to the Chef’s Table Experience.

Looking at the Drinks’ Menu – I had plenty of time for that – for my next visit, I would also go for a glass of Pox. This is a spirit dating back to ancient times. ‘Nobles’ drank it as a way to link with the underworld, Rather than being a mezcal, pox is made from sugar cane, heritage corn and wheat. When I have my glass, I am hoping to link with the angels in the sky rather than the underworld towards the centre of planet Earth.

The colours in the restaurant are mahogany browns, burnt oranges and ochres, with a hint of dusky pink and offset by plenty of green, tropical plants and ceramics. (Kol is big on ceramics – as decoration and as plates and cups.) The Mezcalaria downstairs gives off more of a beach vibe. Anyone want to join me for next time?

You may be interested in my visit to sample the food of guest chef Daniela Soto-Innes of Cosme NYC at Lyle’s London, even though it was back in 2017. My first ‘real’ experience of Mexican cuisine.