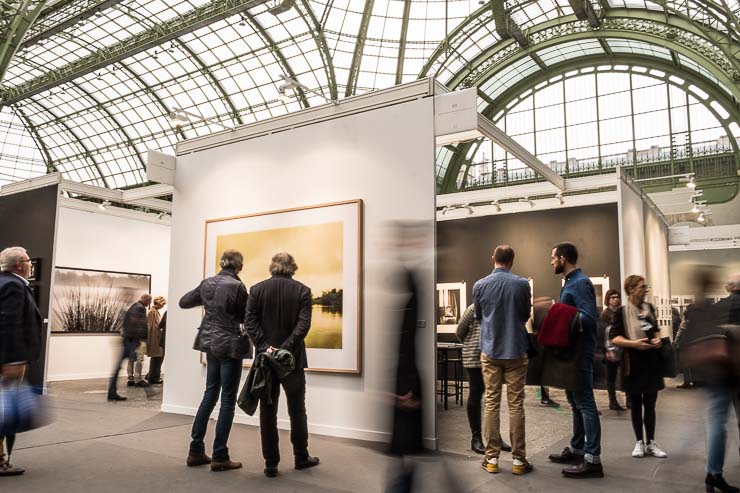 When the Olympic Games open in Paris in 2024, the newly renovated Le Grand Palais will take centre stage. This Beaux Arts wonder of the world is a 1900s cathedral to glass and metal, just off the Champs-Elysées. It has been the backdrop for countless fashion extravaganzas. It is also the home to the world’s biggest annual photo fair – Paris Photo, to where I head each November.

For any event at Le Grand Palais, my main concern is how to escape the crowds. It’s about finding those little places to eat and to stay not too far away. Those places to refuel the soul and body after a full day’s work or a day’s strolling round a city.

Le Grand Palais is in the 8th arrondissement, across the road from Avenue Montaigne, the tax-free paradise for luxury shopping. And it’s on the other side of the Alexandre III bridge from the 7th arrondissement.

While Le Palais has been closed for renovations, Le Grand Palais Ephémère has popped up to take its place until 2024. Across the Seine, n the 7th, Le Ephémère is one hop more towards the west of Paris, at the other end of the Champs de Mars gardens from the Eiffel Tower,

So that’s the secret to finding places near Le Grand Palais – search on both sides of the Seine. The walk across the river also makes for a pleasant stroll.

Where to stay in the 8th – Amastan Paris

I’m more of a fan of the 7th than the 8th. It’s quieter, more residential and less commercial. One place I do recommend in the 8th, and within walking distance of Le Grand Palais, is Amastan Paris, where I stayed in spring 2019. A small, discrete, stylish hotel, with no lobby clogged with tourists in caps and shorts and large suitcases. The one person I met, over breakfast at the shared long table, was a Canadian living in London. He stayed at the Amastan every week for work.

And I just loved the blue bar. Artist Idris Khan, who has a series called Blue Rhythms, sees blue as a colour which has an immediate effect on emotion. For me, blue makes me happy. I too could stay at Amastan Paris every week.

Another option in the 8this Hotel Brach, near the Bois de Boulogne, so more like a 40-minute walk from Le Grand Palais. This five-star hotel, in a refurbished post office building, is designed by Philippe Starck as ‘relaxed luxury’. I went there for dinner in November 2021. It was a lot of fun. A hot ticket in town. This is the place for people who like design to whack you in the eye. Look out for other hotels in the Evôk Collection.

Where to stay in the 7th

At the other end of the price scale from Hotel Brach is Hotel du Champs de Mars. This is a small, family-run hotel in the 7th arrondissement, just off the rue Cler, a pedestrianised street lined with foodie places. Each morning, I nipped round the corner to Café Central for breakfast of coffee, freshly squeezed orange juice and croissant.

Do remember that hotel rooms in Paris tend to be small – and definitely not big enough for a yoga mat. The only downfall of this location is that it is on just one Metro line… Belleville felt far better connected.

A restaurant with its own farm – Garance

It was during my first year working at Paris Photo at Le Grand Palais, back in 2017, that I discovered Garance – named after a shade of red that reflects the colour of a young wine.

This one Michelin-starred restaurant is in the tiny rue de Saint-Dominique, in the 7th arrondissement.

Expect men in suits and smartly dressed women, as the neighbourhood is full of ministries and embassies. But that’s OK. In France, restaurants are more about the food than the clientele. I’ve been to plenty of Michelin-starred restaurants with people casually dressed.

At the helm at Guarance is Guillaume Muller (manager and sommelier) and Guillaume Iskandar (chef), both previously of Alain Passaud’s L’Arpège, where Guillaume M was head sommelier.

Guarance is supplied by produce from its own farm, previously owned by Guillaume M’s grandfather. It’s in one of the remotest parts of France: in the commune of Magnac-Laval, in the region of Limousin, now called Nouvelle-Aquitaine.

What I ate at Garance

When I was back in the district in 2021, I went past Garance. It was still there, and with the same people at the helm. Unfortunately there are not enough days for all the restaurants that I want to try – or to revisit.

Good museums to visit in the area include: Musée d’Art Moderne (8th) and the Musée du Quai Branly (7th).