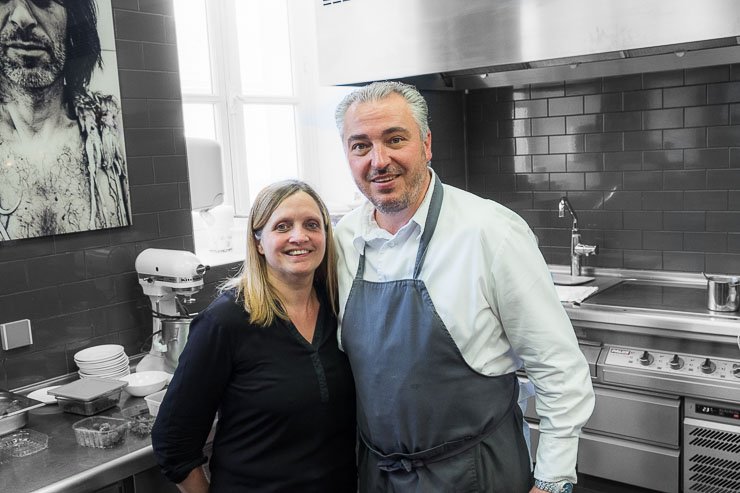 18 Jul Les Avisés: a wise place to eat in Champagne

My road trip with Clos Driver Wine Tours this summer was about taking photographs of inspirational champagne producers as well as eating at some phenomenal restaurants, including the one at the Hotel Les Avisés, or ‘the wise ones’ in English, in the Grand Cru village of Avize.

There is a huge demand for such champagne. Talk in the trade is more about ‘allocations’ than ‘buying’; it’s about cultivating partnerships in order to make sure that you can get hold of an ‘allocation’. If you want to take home a bottle of Jacques Selosse champagne, for example, it may not even be enough to stay at the domaine’s Hotel Les Avisés,; it’s when champagne turns to gold dust, if not gold.

Domaine Jacques Selosse is run by Anselme, the son of Jacques Selosse. It was Anselme who was the pioneer of grower champagne, where the récoltant, the grower, produces their own champagne, rather than selling their grapes to the négociant.

Anselme took over the family estate in 1980. He now produces 57,000 bottles of champagne each year, much more than most of the producers we visited. This is from 7.5 hectares of plots spread across the Côte des Blancs and the Montagne de Reims champagne-producing regions.

The movement pioneered by Selosse, the high priest of grower champagne, is also about working with nature, rather than against it, to create champagnes that reflect their environment, their terroir, as the French call it, and so do the English.

A meal at Les Avisés, the hotel-restaurant at the domaine Jacques Selosse, is a must for anyone visiting Champagne. We stopped off for lunch, together with a Hong Kong wine importer. The Chinese market is thirsty for good champagne, and not just the big brands of champagne.

Les Avisés has more the feel of a stylish table d’hôte – friendly, open and tastefully decorated and designed, with class and character. There is a fabulous terrace, surrounded by bit sun umbrellas, white roses,  lavender and a lawn sloping up the hill. Most people were on the terrace, but I’ve always preferred to eat indoors – I focus better on my food and wine.

The restaurant is run by chef Stéphane Rossillon and his wife Nathalie, who is the chef de salle, who are in my featured photo. There’s a daily-changing blackboard menu at a fixed price of €39.

Les Luchets Mersault from Domaine Roulot, where famed actor Jean-Marc Roulot has been in charge since the sudden death of his father in 1989. Jean-Marc has been in some pretty big French films. His latest film is Back to Burgundy, by Cédric Klapisch – a film about winemakers in Burgundy, with the usual French dose of attractive men and women, picture-postcard landscape and a strong dose of melodrama.

With the Jacques Selosse cellar in the adjoining buildings…

For my other blogs on champagne: