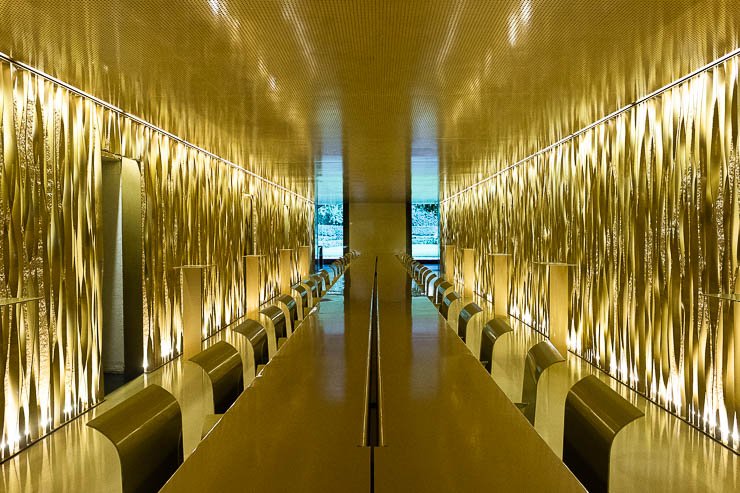 Where do I start with Les Cols? This two Michelin-starred restaurant is housed in a 15th-century country house refurbished and extended by award-winning architects, and set among apple orchards and tall oak and acacia trees that sway and rustle in the wind. The restaurant has its own vegetable garden in a nearby valley among the hills. My idea of paradise: where food, nature, landscape, design, poetry and music meet.

The location: on the edge of the town of Olot in the Garrotxa Volcanic Nature Park, en route to the ski slopes of the Catalan Pyrenees. The Garrotxa is known for its extinct, tree-covered volcanic hills, its vesicular black rocks and for a white bean from the village of Santa Pau.

Les Cols is where Fina Puigdevall was born. She is now the owner and chef at Les Cols – translated from Catalan as the ‘cabbage heads’.

I took a photo of Fina in an outside ‘building’, the Envelat (the marquee) of Les Cols. It’s not a building but a “filter to capture nature“. These are the words of the Pritzker award-winning architects, RCR Arquitectes, whose founders went to school with Fina.

The Envelat is “like a wood with trunks, branches, leaves and clearings” – the space was bathed in light when I was there, as well as at every moment when the sun is up.

I could write a book and shoot a film about my visit one Wednesday in September to Les Cols. Instead, I have limited myself to the below.

5 things about the menu

For the first part of my meal, the suggestion was Ekam by Castell d’Encus, a Riesling with a touch of Albariño with noble rot, that fungi beloved by winemakers looking for fuller flavour and a more intense sweetness (but not enough in this case to make the wine sweet).

Castell d’Encus is a high-altitude winery, at 1,000 metres, in the Catalan Pyrenees, just north of Tremp, in the province of Lleida. The winery only uses herbicides, pesticides and fertilisers permitted by organic farming.

I then went on to a glass of SantBru 2015, from the Monsant Denominació d’Origen, just south of its more famous neighbour, Priorat. A blend of Syrah, Cariñena and Garnacha Tinta.

Back to the menu

The finale at Les Cols

I would travel across the world to meet a person as unique and as warm as Fina, and to experience her food. I could not help likening my experience at Les Cols to my visit to Central Restaurant in Lima, at the start of my journey into the world of ‘food and wine experiences with a dash of art and consciousness’.

The Tasting Menu at Les Cols is €95 including VAT and excluding wine pairings.

When I first heard about Les Cols, I was taken by the idea of visiting this magical place. This was made possible by the Tourist Board of the Costa Brava and the Girona Pyrenees, who I was presented to by Mrs O Around The World.  Thank you to everyone.

You may be interested in other blog posts from my trip to Girona this September:

Keep up with new posts by following my Facebook Page.