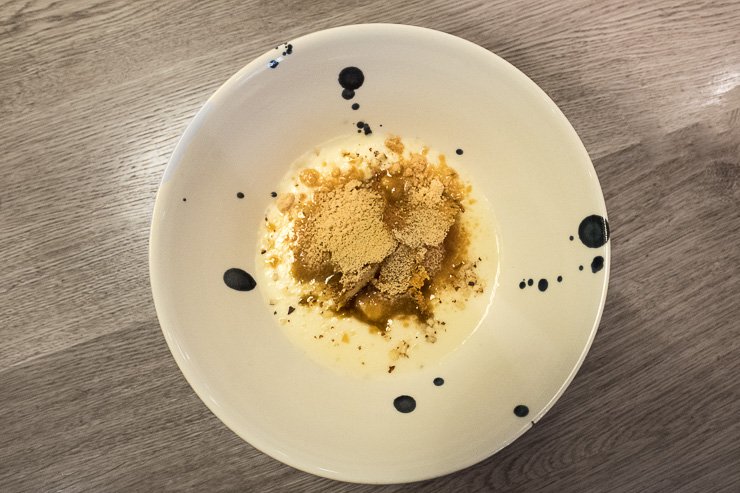 Restaurant Les Itinéraires is renowned for its one Michelin star, a natural wine list among the best in Paris and for creating a culinary journey working with the ‘happy’ vegetables grown by tJapanese vegetable whisperer, Asafumi Yamashita.

Fast track nearly ten years on, and Sylvain and Sarah (the 3Ss) felt they had come to the end of the road, so they changed direction, travelling to Lebanon and Thailand, Oh, how I admire such people. They follow their passions. They see life as a path – an ‘itinéraire’– full of marvels to discover and people to meet. They then returned to Paris a year later to open a new venture, Fleur de Pavé, in the 2nd arrondissement.

Chef Sylvain Sendra and his wife Sarah opened Les Itinéraires in 2008 in Paris’ 5th arrondissement, on the Left Bank, with a menu and style inspired by travels to Peru and Japan. In town for Paris Photo this autumn, I managed to sneak away to sample a restaurant about which I had heard so much while working with Clos Driver Wine Tours in the vineyards of France’s top natural wine producers.

Les Itinéraires is famous for its vegetables.  It is one of three restaurants to be supplied by Asafumi Yamashita. The other two are Pierre Gaugin and L’Astrance, both with 3 Michelin stars. Asafumi tends his vegetables with “love and attention” – so that they grow perfectly – in his garden in Chapet, northwest of Paris.  Wonky vegetables, which don’t grow straight, are not happy vegetables, he believes.

Yamashita was once a professional boxer, an amateur dancer, a golfer and then he became a bonsai artist. When his bonsai were stolen, he turned to growing vegetables, including many hard-to-find Japanese varieties.  Like Les Itinéraires, Asafumi sees himself on a path … the No Do, the path of cultivation, as the Japanese say.

What I drank at Les Itinéraires

Sarah is the force behind the wines, as well as the restaurant area outside the kitchen. I followed the sommelier’s recommendations:

All natural. All amazing.

What I ate at Les Itinéraires

The amuse-bouche was a black rice tartelette filled with salmon’s eggs, sour cream, smoked eel and daikon – the winter turnip that the Japanese so love.

Then came the entrée: an emulsion of smoked Greek yoghurt with Tasmanian pepper, more delicate than traditional black pepper, with togan, or winter melon …

This was followed by cream of Jerusalem artichokes with foie gras powder – as in the featured picture. Then came slow-cooked cod with carrots and passion fruit caramel, decorated with samphire and hyssop …

The meat course was Bresse duckling with an emulsion of lard on a bed of mushrooms and kale, and two types of mashed potato …

Dessert was a clementine soup with yuzu, sprinkled with lime and espelette pepper (a red pepper from the Basque Country – a staple in my larder)  …

And finally, before the road, a coffee…

The walk to Notre-Dame de Paris

Meal over, I walked down to Boulevard Saint-Germain and then through the Square René Viviani, where I popped into the 13th century Church of Saint-Julien-Le-Pauvre, a Melkite Greek Catholic Church, to light a few candles. Then on to the English-language book store Shakespeare and Co, a true Parisian literary landmark, over the Seine, to Notre-Dame Cathedral and down into the RER train station.  A perfect walk after a good lunch.