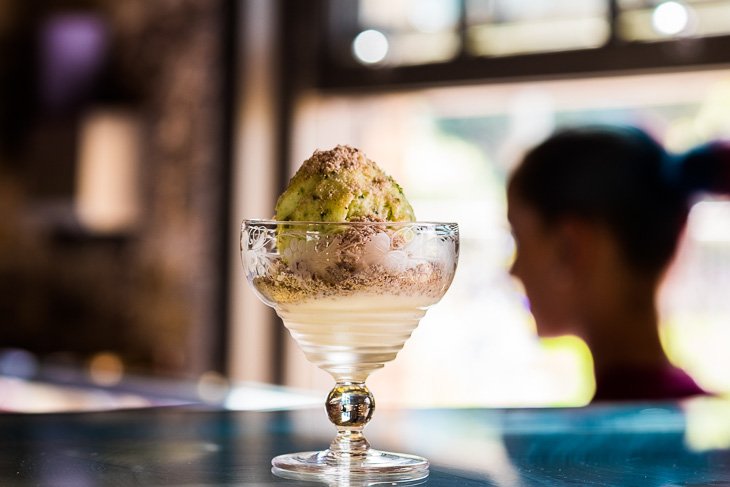 I’ve spent 3 months tasting ice cream across London. And I’ve loved it all! In central London, ice-cream fantasies are easily met if you head to Soho, Covent Garden, Borough or King’s Cross.

At the beginning of my odyssey, I didn’t do ice cream. Normally I do wine, coffee, with a bit of chocolate… & only a few sugary things. But 20 scoops of the best later, and I’m hooked on this dopamine-boosting experience that makes the world more colourful and fun.

Most good, ‘natural’ ice cream in London is made by the Italians and French, but the British are staging a come back… and this time with quality.

What I learnt about ice cream

So here are the ice-cream parlours I particularly liked…

Ruby Violet opened their first ice-cream parlour on their home ground of Tufnell Park in North London. Earlier this summer, they opened a second in the new King’s Cross development, round the corner from Granary Square and Central Saint Martins, and on the way to the natural swimming pond.

The ingredients are seasonal & sourced ‘ethically’, whether organic, bought locally or from small producers, including from a friend’s allotment, and blackberries and damsons from Julie’s home village in Nottinghamshire.

I visited both Ruby Violet parlours. At King’s Cross, I went for Mint & Cucumber Sorbet and Horseradish Ice Cream, with homemade Pecan Meringue topping, served in a beautifully engraved glass, reminiscent of the one’s my grandmother had.

The sun was out, so I sat out on the terrace, looking over to the King’s Cross clock tower, and among the salvias, cardoons and scented-leaved geraniums.

For next time, I will be doing the ice cream and wine pairing … a Gamay from the Touraine AOC in the Loire is recommended for the Damson & Sour Cream Ice Cream. Sounds good!

I’ll be going back for the Mr Black’s Affogato with a Kick …. a mix of Miss White Madagascan Vanilla Ice Cream & the Bold Australian Mr Black Coffee Liqueur. And, meanwhile, I’m drooling over Ruby Violet’s Ice Cream Dreams, with over 50 recipes.

Let the dreaming and happiness continue!

This Rimini ice-cream parlour opened Gelataria 3 Bis  last year in Borough Market. A lively, friendly place, staffed by smiling Italians, next to Neal’s Yard Diary, round the corner from Monmouth Coffee & across from the market.

On the day of my visit, it was one of the few hot days of summer, so I went for a Lemon & Strawberry Sorbet. The Strachiatelle looked good as well.

Originally from Islington, Udderlicious has now opened in Covent Garden’s Seven Dials. Made on the premises using organic milk and fresh fruit. The flavours of the month are chosen by their customers. I went for the Rhubarb & Fig, and I was not disappointed, and, again, the staff were impassioned about ice cream. Udderlicious was founded by ‘Raj’ and ‘Raj’, with Mr Raj’s family having been in the ice cream business for over 35 years.

This little ice-cream story-telling fantasy world is on the first floor of Fortnum & Mason, next to the hampers department. This is the place to bring visitors from abroad who want to do the ‘British’ thing.

I went for the Build Your Own Sundae: nil points for my presentation skills, but full points for taste: Fortnum’s Florentine Ice Cream with Blood Orange Sorbet & Raspberry Coulis.

Cartoons on the walls reflect an Alice in Wonderland’s tea party, and include a bit of history, listing the kings and queens of Britain & the lengths of their reins.

It was here that I learnt that hot tea goes well with ice cream, especially black tea without milk. At Fortnum & Mason, I was recommended the Royal Blend Tea – first blended for King Edward VII in the summer of 1902 and a mix of Flowery Pekoe from Ceylon (now Sri Lanka) and a maltier Assam… a nice little story to tell your guests.

Pierre Hermé is on my list because that is where my love for ice cream started… last summer, in their store in Monmouth Street, as I was going to buy coffee at Monmouth coffee.

The ice cream is only available in summer. I went for the ‘Fetish’ Jardin Enchanté, with Lime Ice Cream, Raspberry Sorbet & Espelette Pepper (red pepper from the Basque Country). For lovers of Pierre Herme macaroons, there is the Infinement Citron au Macaron, with Lemon Ice Cream, Lemon Almond Paste & Macaroon Biscuits.

The Sicilian pistachio sorbet at La Gelataria in Covent Garden. The sorbet is made with toasted Bronte pistachios from the foot of Mount Etna in Sicily, Maldon sea salt flakes and sugars. With 55% fat, pistachios, I learnt, make for good sorbets.

The Cocciolato Fondente Sorbet, with a blend of Grand Cru extra bitter cocao, and Black Cherry Gelato… my favourite at Scoop Gelato, with parlours in Covent Garden, Soho, South Kensington & a pop-up in Brixton.

And yes, I still have more I need to visit…. Gelatorino and Morelli’s Gelato in Covent Garden, and Oddono’s, which are across London. For those preferring goat’s milk, there is the Greedy Goat in Borough Market. And Snowflake Gelato in Soho is also very popular.