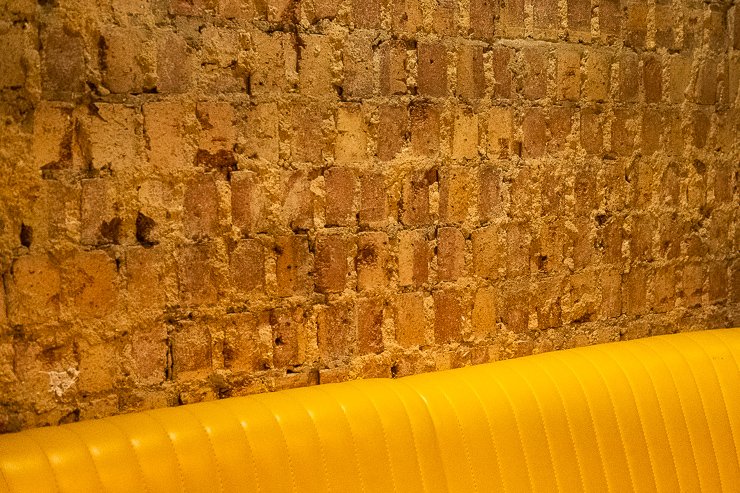 Everyone has their own definition of luxury. For me, luxury is about craftsmanship, heritage and creativity, as well as passion and values – values that help us respect Mother Earth, and each other.

Lyan Cub Restaurant in Hoxton is all about eating, drinking and being merry without luxury being about ‘waste’ and sustainable living about ‘sacrifice’: we don’t have to suffer to save our planet, we really don’t.

(Lyan) Cub is a partnership among a whole host of people… including:

Living sustainably requires a ‘conscious’ mind … which first requires a still mind so that you can see more clearly and creatively.

Being a ‘conscious’ restaurant, Cub reminded me of the power of eating ‘consciously’; mouthful by mouthful, sensation by sensation – no need to talk, no need to think … only to feel and experience.

Sounds weird? Yes, for some. Here’s to keeping life weird, and wonderful!

Was I able to eat consciously at Cub? I tried, but I was grappling with the low level eco lighting creating dark horizontal lines across my pictures – I learnt later I should have switched my Fujifilm shutter to mechanical.

The set menu is made up of about seven little courses, all paired with a drink – whether wine, a cocktail or tea.

I sat at the bar, overlooking the open kitchen. First came a little cup of Oolong tea to open the meal. Wow, the music was good.

Then two appetisers appeared: Sea Buckthorn & Quinoa and Beetroot & Miso. The quinoa was British – no pushing up prices for the locals back home in Peru.

The starters were accompanied by a glass of Krug Grande Cuvée ID117012 with a Water Jelly made with Honeysuckle, Tarocco Orange (especially sweet) & Ruby Grapefruit.

I spent so long enjoying my champagne cocktail that I finished it over my first course of Fennel cooked in a Lemon Verbena Brine, with Onion Seeds, Fennel Pollen, Green Juniper Oil & Crab Apple Broth.

I then went swiftly on to the cocktail of Conference Pear, Dandelion Belvedere & Pineapple Weed (aka wild camomile) that was meant to accompany it.

Then came the Fungus & Kelp Broth with butter made from Neal’s Yard cream and bread from the nearby E5 bakery (one of my favourite foodie destinations in London). Real soothing, comfort food.

Such an underrated vegetable. A Victorian diner table staple. Called the ‘oyster’ vegetable given its reputed taste of oysters. At Cub Salsify came with a glaze of ‘Waste’ Treacle, with Dandelion Leaves & Elderberry Vinegar.

I get very excited when I am served a wine made by a producer who I have met.  This time it was Fanny Sabre.  Her Bourgogne Aligoté is a real favourite, and it went perfectly with the salsify.

Then came… Purple Carrot braised for four to five hours in a Fava Bean Miso, and then scattered with Winter Savory and roasted at a very high temperature to caramelise. Then dressed with confit garlic oil and served with Siyez, one of the world’s most ancient grains, Ewe’s Curd and a Winter Berry Sauce– fermented sloes & bilberries, together with dogwood & rowan berries foraged by the chef himself.

Siyez is one of the world’s oldest grains. I hadn’t tasted such a tasty grain since I was at the Green Rabbit in Stockholm, albeit here it was not siyez.

I went to a wedding last year on the Moray Firth and planned to then travel across Scotland to the island of Islay to visit the Bruichladdich Distillery – until I realised that I couldn’t do the journey in a day.

I loved the idea that the distillery leave their whisky barrels on the beach to be lashed by the winds and the salt.

Bruichladdich Whisky together with Green Olive & Chanteclair Amazake accompanied the salsify dish. Amazake is a Japanese low-alcohol rice drink, at Cub made with Chanteclair pear.

The whole Cub menu has a strong Japanese influence – picking up on the umami taste so often found in Japanese cooking.

An additional dish to the menu is the Frozen Stichelton (raw milk blue) cheese grated onto Mother Cracker from E5 – crackers made from starter yeast. Once again, those amazing recycled plastic plates made an appearance… oh, and the table tops are made out of recycled yoghurt pots, with the flecks of silver coming from the reused foil.

The crackers were served with a glass of La Rumbera, a natural, sulphite-free biodynamic wine from Alella, just north of Barcelona. Oriol Artigas makes this wine from the Pansa Blanca grape  –  elsewhere in Catalonia known as Xarel-lo, and one of the three main grapes used for cava. It was nice to come across a Catalan wine after my recent trip to Girona.

The dessert was Pumpkin Seed, White Caramel & Douglas Fir Oil.  This was accompanied by a Silver Tip Tea served in a glass with Manuka Honey & Compressed Plum. Refreshing and delightfully low on sugar.

I left Lyan Cub, the music, the people, the food, the vibe to step out onto a deserted Hoxton Road.

I could see the office buildings of Old Street in the distance. It was a bleak mid-winter night. However, I felt cheered by the realisation that I could have my cake (luxury and sustainable living) and eat it.