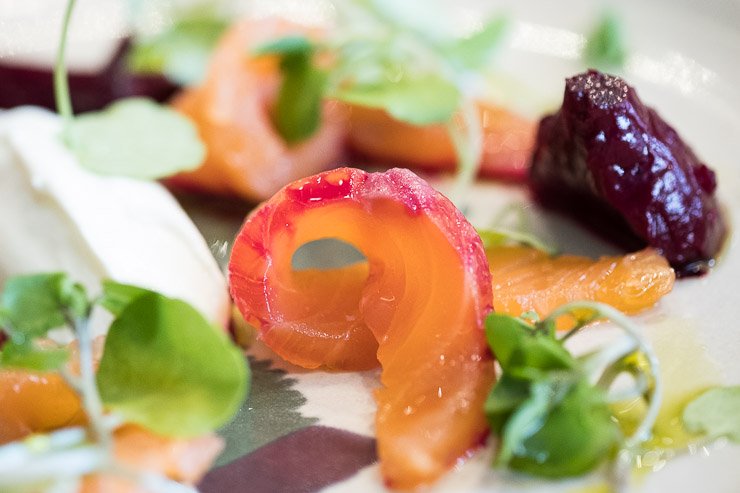 Ahead of my little trip to Scotland later this week, I went for lunch at Mac & Wild in London’s Fitzrovia. The restaurant prides itself as being the ‘best Scottish larder south of the border’.

Most of the produce at Mac & Wild comes from the Highlands. This is the part of Scotland above the Great Glen fault line, and which geologically belongs to North America. No wonder so many Scots want independence.

The Highlands are renowned for being the last great wilderness of Europe, and for their ‘wild’ food, like the food served at Mac & Wild.

Now, I’m a quarter Scottish. My grandmother was a Stewart. I’ve seen photos of the dark & dreary family home in Perthshire, said to have been gambled away. I have a family picture above the fireplace of Mary Queen of Scots on a ship returning from France; and a pair of Scottish Red Deer antlers on my bedroom wall, shot, hopefully in a sustainable way, by my father.

I have a Made-in-Scotland Anta tartan rug, just like Mac & Wild’s Anta rugs and Anta plates, with thistles and all things Scottish.

The restaurant walls, meanwhile, are lined with black-and-white photographs taken at the Alladale Estate, north of Inverness, which is where I’m going later this week, as well as butcher’s hooks hanging from the ceiling, and a rustic brick wall decorated with bright-coloured bottles of Mac & Wild’s whisky-based cocktails.

What we ate at Mac & Wild

We went for four starters between the two of us:

Smoked Salmon with Beetroot, Nasturtium Leaves, Chives & Yoghurt (see featured image). The salmon comes from the smokehouse at Intervawe, on the west coast of Scotland, opposite the Isle of Mull.

Venison Tartare, with Parsnip Purée & Crisps, & Pickled Baby Beetroot. The deer is whatever is in season, and for our lunch it was Red Deer,  shot by ‘John’ on the Glen Canisp Estate and butchered by ‘Alex’, the menu said. You can’t get more traceability than that.

Haggis Pops, bites of haggis, Scotland’s national dish, made from sheep’s heart, liver and lungs, mixed with onion, oatmeal, suet and spices. This was served with Red Jon Sauce, a mix of redcurrant with English mustard, made from ground yellow mustard, turmeric & wheat flour. Loved the mix of tastes.

Mac & Wild Scotch Egg, with the outside made from venison, black pudding (a type of blood sausage) & haggis, and served with English mustard.

Venison Chateaubriand, a thick fillet of grilled tenderloin steak, with bone marrow sauce and hand-cut chips.  Amazing! Proof if ever of why I’m not a vegetarian.

Our neighbours ordered the Veni-Moo Burger, voted London’s Best Burger 2016, and a mix of venison and beef. That looked good too.

It’s taken my trip to Scotland to look at the world of whisky, and it’s fascinating. Scotland has at any one time 25 million casks of whisky laid down – that’s 5x the number of people in Scotland. Whisky also contains very few calories, as a wine friend told me. This is important for me at the moment.

Each dish at Mac & Wild is paired with a whisky. So as not too get too drunk, we ordered two. I had a Bunnahabhain from the isle of Islay, on the west coast, and my son the Aberlour A’bundah at a whopping 60.9°.

I’ve learnt that you should only go for whisky above 46°. Anything less, and there’s the likelihood that the production process isn’t natural.

We had our whisky neat, served with a separate glass of water. The trick, we were told is that you smell the whisky with your mouth open, to get maximum vapours, then you wet your lips with the whisky and for the number of seconds it takes for your lips to sting you add a certain amount of water … the whisky made me forget how much this was.

If I’d had another drink, I would’ve gone for a Mac & Wild cocktail, crafted by Edinburgh-based mixologist Luke Leiper. The cocktails are made in small batches using Scottish herbs and botanicals. I liked the sound of the Forager, made with 12 year-old Glenkinchie whisky with heather honey, barrel-aged bitters and foraged pine leaf tincture.

A separate story – on farmed salmon

Non-organic farmed salmon can make me ill. Mac & Wild’s farmed salmon comes from Wester Ross in Ullapool, on the  west coast, looking towards the Isle of Harris, and it’s not organic. This made me dig a bit deeper into how salmon is farmed, and why some is good and some is bad.

At the end of the day, it’s all about trust… you have to trust where you eat and where you buy from. I definitely trusted Mac & Wild.

Mac & Wild has two restaurants in London. The other is in Devonshire Square, near the Gherkin.