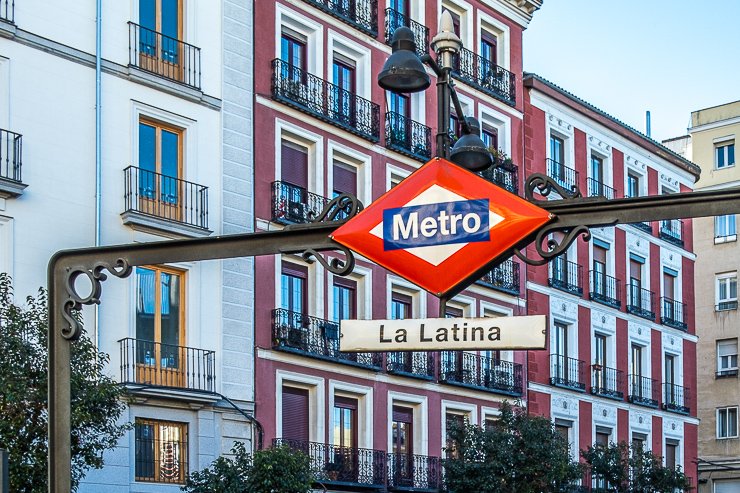 What I like about the Spanish capital is that it is small enough in the city centre to walk to most places. Local still reigns. It’s a city of neighbourhoods, or barrios, each one with a distinct flavour.

Madrid is one of the highest cities in Europe, perched on an arid plain 700 metres above sea level. It’s renowned for nine months of infierno (hellishly hot heat) each year and three months of invierno (winter).

I last went to Madrid in January 2023, on my way to the Sierra de Gredos mountain range. In the city streets, the thermometer hovered around zero at night, while the skies were blue and the sun sharp enough for me to put on my sunglasses during the day.

Before then, I hadn’t been to Madrid since July 2019. The sun had beaten down with a vengeance, day after day, pushing people into the buildings, away from the open streets, before the clock struck midday. Not even the mature trees in the botanical garden provided sufficient shelter.

Taking a look at the central neighbourhoods of Madrid, my advice is to avoid the tacky tourism of Sol-Gran Vía. That’s why I start my post at Las Letras, a quieter neighbourhood east of Sol. I then move further south and west to Lavapiés and on to La Latina, on the city’s fringes, looking out towards the mountains of Guadarrama.

Las Letras – in the centre of Madrid

For location, you can’t beat Las Letras. It’s near Sol (for the train from the airport) and Plaza Cibeles (for the bus to the airport). And it’s a short distance from the golden triangle of museums: the Prado, the Thyssen-Bornemisza and the Reina Sofía,home to Pablo Picasso’s La Guernica. It’s also across the road from the city’s botanical garden and El Retiro park, the city’s biggest green space.

I like to stay in Las Letras, as it’s so easy to get around. My choice is Alojamiento Jaen at No 5 Cervantes Street. The street takes its name from Miguel De Cervantes, author of Don Quixote, who used to live at No 2. I prefer this simple guesthouse to a four-star hotel. The street is quiet, there’s lots of natural light in the rooms, the corridors are quiet, and the welcome familial.

For shopping in Las Letras, my choices are:

La Latina – living on the edge

To catch the view of the Sierra de Guadarrama. take the narrow road of San Buenaventura that forks up from the Basilica de San Francisco el Grande (one of my favourite places in Madrid for quiet contemplation) to the Jardín de las Vistillas, or the Garden of the Views. From there, you can also see the dome of the Cathedral de Santa María Real de la Almudena in the old centre of Madrid, Madrid de los Asturios, on the other side of the Segovia viaduct.

I discovered La Latina during my trip in January 2023, and it is now a firm favourite as a Madrid neighbourhood. For coffee, Pastora is my favourite. With the beans coming from the owner’s own farm in Colombia. The cakes also looked good. And meanwhile I bought chocolate made in Galicia and some tinned sardines. They also specialise in natural wine and beer.

On the other side of the street is one of Madrid’s best bakeries: Obrador San Francisco. No savouries for lunch, though, Only loaves of bread, cookies and, given that it was just before the day of the three kings (6 January), stacks of roscónes de reyes, a crown-shaped sweet, brioche cake. Unfortunately all the little roscones had gone by the time I got there.

A great little Spanish craft store is Cocol, in a side street alongside the Church of Saint Andrew the Apostle. I came away with four candles (€2.50 each), two perfumed with natural vetiver and two with bergamot. They are made in Valencia following the designs and molds once used to make candles for carriage lanterns in the days before the motor car.

For lunch, I went to Marmitón, a bistro that came via a recommendation from London. Here I met co-founder and chef Pablo Sánchez and had 3 great little courses, all designed to have a twist … and with a little reflection of his Malaga origins.

The founders of Marmitón have also launched Barmitòn a few streets away. With the music starting and the doors opening from 13h00, I’d gone there for a little aperitif before eating at Marmitón. What did I have? A glass of verdejo from Rueda, north-west of Madrid, with some olives dribbled with salsa brava, made from olive oil, smoked paprika and, usually, a touch of tomato paste.

Walking south from Las Letras to the district of Lavapiés, or east from La Latina, you realise how Madrid is also a city of hills. Lavapiés is the old Jewish quarter, and, quoting the Monocle Travel Guide on Madrid, still “attracts diverse diasporas, from Africa to India and Asia”.

La Canibal, opposite Lavapiés metro station offers wine and beer are on tap. Visiting in 2019, I went for the fixed lunch menu of gazpacho and Iberian pork with potatoes, and a glass of Chardonnay from Bodegas De Fábula in Murcia.

And for coffee? Hola Coffee, who roast their own beans. has a café in Lavapiés, round the corner from La Canibal. There cups – at least back in 2019 – were made by a Korean artists who mixes coffee grounds into the clay.

The Conde Duque neighbourhood is home to the spectacular Liria Palace, the residence of Carlos Fitz-James Stuart, the Duke of Alba. It’s “among the largest [arts collections] accumulated by European aristocrats”, wrote The New York Times in 2012.

Conde Duque becomes Malasaña at San Bernardo street. Malasaña, back in the 1990s, was run down and dingy, then it became the LGBTQ neighbourhood. Now the tourists spill over Gran Vía to wander through the narrow streets and visit the little stores and restaurants.

My choice of where to stay in Malasaña is the 7 Islas Hotel. The lobby is the best I’ve been to in Madrid, but the rooms are dark, and mostly look out over a central well. Near to the hotel is Angelita. which is all about cocktails, natural wine and fun, with, when I visited in 2019 much of the produce coming from the owner’s village near Zamora, where his parents run a vegetable garden.

Head east towards the Paseo del Prado, the main tree-lined avenue linking north and south Madrid, and you cross over into Chueca. Favourite restaurants here include Tasca Celso y Manolo and Taberna La Carmencita, which I write about in my post about restaurant group Deluz y Companía.

Between the Paseo del Prado and Chueca is the quite fancy neighbourhood of Salenas, where I found GOTA natural wine bar, as well as the ACID Store, both opened by ACID Café since I was last in Madrid in 2019.

I rolled up at Gota, with a reservation at the bar for 8pm and things were already moving, even though this is early for Madrid. I had a glass of Galician albariño – for a ntural wine at Euros4.50, and coming from London, this was a snip – together with Col Farce, soubise, ensalda de hierbas and Vieira, endive, with a vinaigrette of chicken stock. I’ll be back for sure!

And when I learnt my lesson to always check the opening times.

For photography and art-loving visitors to Madrid in summer, check out the many exhibitions that make up PHotoESPAÑA, the city’s annual photography festival. I saw some great works when I was there in 2019.

The many venues across the city included the exhibition by Madrid-born Javier Valhonrat in an air-conditioned building in El Retiro park. Javier made his name in fashion but this series focused on his “relationship” with the Maladeta Glacier in the Pyrenees and the effects of climate change.

In effect, the venues, dotted across the city, provided the perfect bolthole from the summer heat, but, with climate change, the old dictum of seven months of infierno and three months of invierno can no longer be taken for granted. I had two days of solid unexpected rain in January 2023 in the Sierra de Gredos. “This is very unusual,” the locals said.

Discover what this TOP Cantabrian restaurant group is doing in Madrid