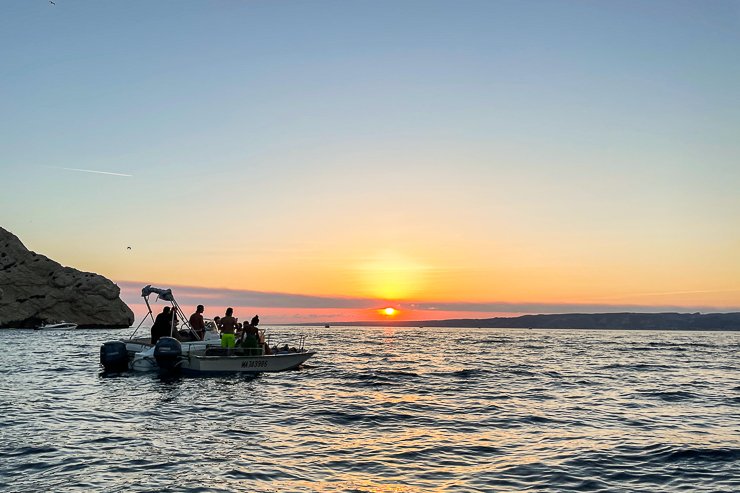 I feel at home on the streets of Marseille. Maybe because I’m an exile (by choice). “Marseille is, and always has been, the port of exiles .… whoever disembarks in the port is inevitably at home,” wrote Marseille author Jean-Claude Izzo.

This July I made my fourth visit to Marseille. It is a city that has more people than Barcelona, and yet whose inhabitants are largely shunned by la France profonde… although not by the edgy, creative types looking for a lively city cheaper than Paris.

I spent five days on the southern edge of Marseille, mesmerised by the sea views and swimming in the calanque, the rocky coves that stretch from Marseille, along the Calanques national park, and then on towards Cassis.

Marseille has changed a lot since I first visited ten years ago. As long as you keep out of the northern suburbs, the 2016 Netflix series of Marseille, which portrays the city as a place in the sun with a heady mix of corruption, gangs and cocaine-snorting, seems far away. Even so, the woman at the calanque told me, “This is not France. This is Marseille!”

When ‘French’ people are posted to Marseille, many choose to live instead in Aix-en=Provence and to commute. Or at least that was what I was told by a lyonnaise, just before I had made the 1h40-minute train journey from Lyon to Marseille.

The Vieux Port of Marseille

During my July trip, I tore myself away from the calanque to take a day trip to the centre of Marseille as the sun rose high in the sky and the thermometer hit 40 degrees C.

As always, I first headed to the Vieux Port, the Old Port – the heart of the city. Unlike Barcelona, Marseille has always looked out, across the Mediterranean. The Vieux Port is also the place to catch a boat for the popular excursion – yes, I did it many years ago with my son – to the island of the Chateau D’If, the setting for Alexandre Dumas’ The Count of Monte Cristo.

Watching over the city is the Basilica of Notre-Dame de la Garde, The 19th-century basilica can be seen from every corner of the city. It welcomes those arriving by sea, whether from Corsica or Sardinia, Algeria, Morocco or Tunisia. Locally, the neo-Byzantine monument is called la Bonne Mère, or the Good Mother.

A city of 111 neighbourhoods

In the 7th arrondissement of Marseille, in the foothills of Notre-Dame de la Garde – so slightly out of the way – I was introduced to Bricoleurs de Douceur, run by pastry chef Clément Higgins. “He’s French,” I was told, when I asked about the origins of his surname. The names were as good as the cakes. To pick a few: the ‘Michael Choumacher‘ (choux pastry, raspberry, vanilla, orange flowers, yellow & green lemons); the ‘Pablo Escobar’, (coconut, mango, passion fruit); ‘C’est Marseille Bébé‘ (brioche, peach, vanilla ganache). Excellent for a sugary morning pick-me-up.

Five minutes’ walk east of the Vieux Port, on the rue d’Aubagne, is the Maison Empereur, named after its founder, François Empereur – rather than a French emperor. The store is an Aladdin’s cave of homeware, with a maze of rooms up creaky flights of wooden stairs, and wrapped around the higgledy-piggledy structure of a 19th century building.

My purchases? A Maison Empereur cloth for drying glasses and a hand whisk for beating eggs. I also wanted to come away with some Plasticana gardening boots, made from hemp + recycled plastic, but none were left in my size.

You can even stay at the Maison Empereur chambre d’hôte at the back of the store.

One block along the rue d’Aubagne, past L’Épicerie L’Ideal, and down a side street, is the Herbolist Père Blaize. What Maison Empereur is for homeware, Père Blaize is for herbs ¶ tinctures, creams and natural medicines. The cluster of shoppers waiting to be served was enough to whip me into a frenzy to shop. And shop I did. This store is special: 200 years of experience and 5,000 plant-based goodies.

Traditionally, Marseille cuisine is a cuisine of bouillabaisse, ratatouille, ravioli in olive purée and panisse (fried chip-like wedges made from chickpeas). I had none of these when I went for lunch at La Femme du Boucher, one metro stop south of the Vieux Port. That evening, mentioning to a neighbour where I had eaten – as we took our dip in the sea – she exclaimed: “That’s the most in place in Marseille!”

La Femme du Boucher might be fashionable, but the vibe is casual. The ‘wife of the butcher’ is the chef and les mecs (the guys) are on the restaurant floor.

The menu is not all about meat… my gazpacho, for example, was vegetarian. (The tomato-strawberry combo reminded me of Fu 1039 in Shanghai.) I followed this with courgette stuffed with rice & meat – Courgette farcie au riz et à la daube… the coffee I saved for Deep (see below).

The district of Le Panier

Jean-Claude Izzo’s Marseille trilogy (see below for more) is largely set in the old district of Le Panier, on the inclined narrow streets above the northern side of the VIeux Port. Among the little shops and bars, you can also find Microcosmos, the urban winery of Marseille.

The winery was not open the day that I was in Marseille (I ended up buying the wine for the evening meal from La Femme du Boucher instead), but the shutter was slightly raised, and I had that warm, coming-home feeling from having experienced something physically that before had only existed online.

I had first discover the wines of Microcosmos at Carters of Moseley, on the outskirts of Birmingham. And for some strange reason, I had kept up on social media with Fabienne Völlmy who founded the winery together with her husband Lukas, who is always seen in posts working in the vineyards, with his tractor and his dog.

Mucem – the museum on the water

Despite the dog days of summer, I walked in the afternoon sun to Mucem, the art & culture museum, now linked to a new museum building in the port designed by Rudy Ricciotti, whose practice is in Bandol, famous for its heady Provençal reds. I was there not only to see the museum and the architecture, but also a photographic exhibition part of Les Rencontres d’Arles, where I had been earlier in the month.

As one of my favourite authors, I would like to finish with a few more words about Jean-Claude Izzo. He was born in 1945, the son of a barman from Naples and a seamstress from Spain. He is best known for his neo-noir Marseille trilogy (Total Chaos, Chourmo,

Solea) where the central character is ex-cop Fabio Montale,

Izzo’s novels do sensuality-tinged, edgy crime better than any Netflix TV series. His works are peppered with the smells of food, wine and pastis, which provide a light relief from the tensions of Marseille’s underworld that he writes about.

His series of essays in Garlic, Mint and Sweet Basil

provide a window on Marseille and Mediterranean cuisine “The cuisine of Marseilles has always rested on the art of using fish and vegetables disdained by the local ship-owning upper classes,” he writes.

And with regard to the lure of the local market: “Wherever I go, in any city in the world, the first thing I do is go to the market. To feel the city… Shopping in a market is nothing but the reinvention of the art of living simply, and together.”

Despite finding happiness in food and wine, Izzo was a pessimist. He wrote, and this was 20 years ago: “The future is desperate. But I’m not the one who is desperate, it’s the world.”

Other places to eat in Marseilles

Some of these I’ve been to, but not for some years, and others not:

On the southern fringes