02 May A natural way with wines: London’s Spring Fair

I was on a mission to discover some summer wines: ‘natural’ wines, for meaty BBQs, fizzy celebrations and sunny afternoons lounging on the grass. For the first time, I went to the Spring Fair organised each year by Gergovie Wines and Tutto Wines in The Round Chapel in Hackney.

All 40 or so producers at the Spring Fair produce ‘natural‘ wine. According to my philosophy, this is wine produced with respect for the natural environment and made with passion, craftsmanship and that je ne sais quoi touch from the heart.

For me, natural wine is not filtered, it has minimal if any sulphites, the grapes are grown organically, and quite often, in France, the wine is labelled simply ‘Vin de France’. Natural wine producers are ‘frontier’ producers, who like to break boundaries and rules laid down by INAO, the organisation in charge of the Appellations d’Origine Controlée.

If you knew what went into most other wine, then you’d only drink natural wine. Even then, some ‘natural’ wine is made with grapes treated with things I wouldn’t like to drink. Knowledge and trust are my bywords when buying wine.

How I choose wines

I am not a wine expert, but I’ve taken a lot of photos of wine producers for Clos Driver Wine Tours, in Champagne, Burgundy, Beaujolais and Alsace. Most of the producers we visited had 10 hectares of vineyards or more, and their wines could be found on the tables of the world’s top restaurants. The wines at the Spring Fair were a little more modest, and often from producers with just a couple of hectares.

When I choose wine, and when I’m unable to taste it first, No. 1 I ask a wine expert who I trust. For me, this is Sebastien Crozatier of Clos Driver Wine Tours, based in Lyons. I also trust Gergovie Wines’ co-founder, Raef Hodgson, who I try to catch when I go to 40 Maltby Street to buy wines and grab a bite to eat.

It’s all in the label

Of course, all the above is if I don’t know the wine maker, but with one million producers of wine around the world, that’s not always possible.

Below I’ve focussed on a handful of people at the Spring Fair. Producers recommended to me, whose wine I liked, whose labels I liked, and who I liked as people. Above all, I chose them from a gut feeling, a je ne sais quoi. Even so, I’m sure I’ve missed out lots of amazing producers.

I was so busy juggling my camera, 3 lenses, a tasting wine glass, handbag and rucksack for the wine that I did not take many notes, and many of these producers do not have a website… their passion is making wine, not selling it. So the below are not wine reviews… they are no more than observations gleaned.

Mylène’s 8 hectares of vineyards are in the garrigue hills above the port of Sète in Languedoc. Her vineyards are near enough to the sea to feel the breeze. Everything is worked by hand and, mostly, by horse. I loved all of Mylene’s wines – and her t-shirt, ‘Excuse my French’, in a colour that could not be missed.

My featured image is of Mylène’s Rita, a 100% Carignan, named after her Andalusian grandmother and Saint Rita, the patron saint of the impossible… a saint much needed in life.

The white Lady Chasselas is 100% Chasselas, a grape more linked to the wines of Switzerland. The name has a ring of Lady Chatterley, as in the DH Lawrence book of fame, which gives the wine a certain elegance – I’m sure the name does affect the taste. This is a wine that goes well with seafood, including the local dish from Sète of Tielle sètoise, an octopus pastie with tomato and spices.

The pure-Tempranillo Karm is named after the eponymous word used by the Arabs of Al-Andalus for vineyard. The word ‘karm’ also lies behind the origin of the name Carmen, which in Latin signifies a song or a poem. The label background, meanwhile, is a design of William Morris, of the British Arts & Crafts Movement. A wine both “militant” and poetic; powerful stuff.

Les Moulins de Mon Couer I’d already tasted at 40 Maltby Street. The wine is made with a layer of Cinsault grapes, then a layer of Carignan followed by a layer of Syrah, and so on.

Unfortunately I did not taste Mylène’s Far-Ouest, a blend of all her red grapes, so Grenache, Syrah, Carignan, Cinsault, Marselan and Aubun… with a name inspired by her love of films such as The Good, The Bad and The Ugly. 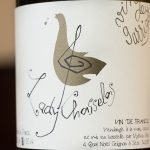 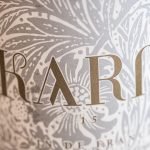 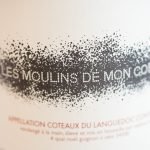 Aurélien is an artist. He’s originally from the Paris area and then moved to the Auvergne, south of Clérmont Ferrand and west of Lyon. His wines were a delight. For the moment, only small quantities, from vines up to 115 years old. This was the up-and-coming producer that people were talking about at the Spring Fair. He was at the fair with two magnums and another hidden under the table. The only wine maker that I know who creates his own labels.

I want to come back to Aurélien in a separate blog as he has a view on wine, how it’s produced and how it’s drunk, that I found prescient and a reflection of my own beliefs. 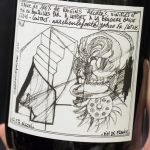 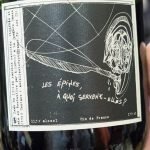 This architect-turned-wine producer was at the fair with just one wine, his Serragghia Bianco; a definite for drinking with seafood, especially by the sea, and made from Moscato D’Alessandria. It was sweet on the nose and salty to taste.

The first thing I noticed about Gabrio were his blue-tinted, pentagonal glasses. The second was his Hermès apron. Gabrio produces his wines in Pantelleria, an island closer to Tunisia than Sicily and famous for its capers. 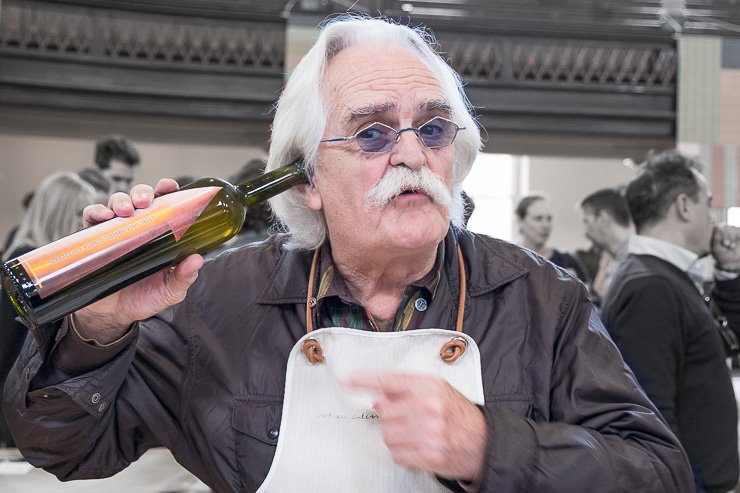 While Gabrio was an architect, Fabio originally was a geologist. He gave it up to make wine in Barbaresco, at the other end of Italy from Sicily, in Piedmont.

Fabio took over the abandoned vineyards of his maternal grandfather, who at one time had over 200 grape varieties. His motif is the sickle and rake, La Msoira e’L Rastel in Piemontese dialect.  Pure artisan and passion, down to the wood for the barrels, which is made from staves cured in a sauna using volcanic rock. He told me that he had just run the Hackney Half Marathon that morning. I didn’t believe him.

His labels are made with handmade paper by craftsmen on the Amalfi coast. 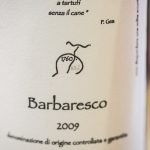 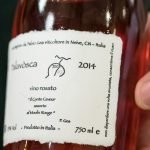 There was a big contingent of wine producers from the Ardèche at the Spring Fair. This region is north-east of the Cévennes and Les Grands Causses, where I was last June, and west of Montelimar. This is because land here is relatively cheap, making it an ideal place for passionate wine producers, without deep pockets, to set up on their own.

Antonin’s father, Gilles, moved to the Auvergne in the 1980s, started farming organically in the 1990s and made his first sulphur-free wine in 2000. Their wine, under the name of Le Raisin & L’Ange (The Grape & The Angel) is produced by buying in grapes from surroundings vineyards. This means that they usually produce a far greater range of cuvées.

Anthony is well known in the natural wine world. La Sorga works mainly with old varieties and old vineyards, and buys in all their grapes. They never mix vineyards, and each year they produce 20 to 30 different wines in small quantities. Anthony is based just outside Béziers, in the Langedoc.

I had already tasted the Chaz Zen at 40 Maltby Street, a blend of Sauvignon Blanc, with Chasan and Mauzac. I tried to scribble down the varieties used for the other wines, but by that time I had turned to drinking rather than spitting, and I gave up.

I noticed the bottle of Ranciolytique at the back, so I asked him to taste it. “Don’t spit this one out,” he said to me. It was really good. Grenache Noir, Blanc and Gris, from 85-year-old vines. The older the vines the better they are… should be the same with people. It was candied grapes, cherry pips, chocolate, orange. Sweet but balanced by the acidity and tannins.

Lastly, I wanted to include these wine labels… fish, elephant’s legs and ants. And the wine tasted good. I could quite fall for buying wine with labels featuring animals… I would draw the line, though, at cats and dogs, that would be too much, but then Chat Zen is translated as a zen cat!

It was cold that weekend. God knows what these wine producers, many from sunny climes, must have thought of grey London.

For a few more pics….